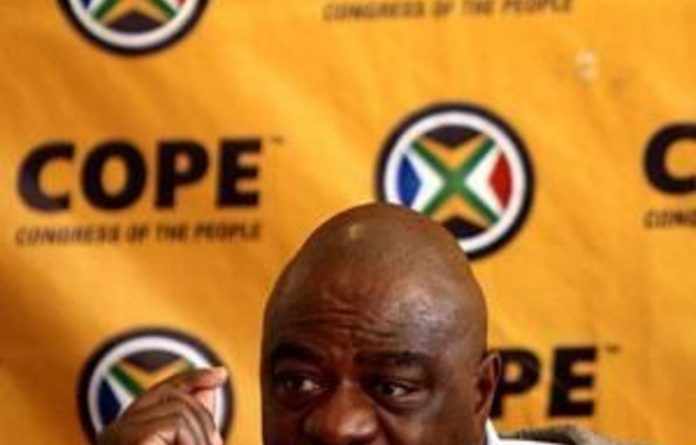 The leadership battle with Mosiuoa Lekota was distracting the Congress of the People from important societal issues, Cope co-founder Mbhazima Shilowa said on Tuesday.

Shilowa’s application to have an order which bars him from calling himself president of the party lifted was postponed in the South Gauteng High Court in Johannesburg.

“By being in court, Cope is missing out on the appointment of the judge president because the focus is on internal matters,” Shilowa said outside the court.

Addressing a group of supporters who carried posters that read: “Lekota: democracy fugitive” and “Lekota, why are you absent”, Shilowa said the party was missing out on the issues of the need for shelter, electricity and water provision, and rising inequality.

In February, Lekota secured an interdict from the court preventing Shilowa from calling himself the president or a member of the party.

This, in effect, stopped him from participating in the party’s politics.

The two were part of a group of co-founders of the party who left the ruling African National Congress in 2008 because they felt it had lost sight of its core values.

They made the move after former president Thabo Mbeki stepped down, having lost the presidency of the ANC to Jacob Zuma in Polokwane the previous year.

Cope has since then been unable to agree on who is its president.

Shilowa wanted the court to lift the order, and also order that an independent body be appointed to oversee a national elective congress and the results of that congress.

Shilowa’s counsel Jan Heunis submitted that Lekota had assumed leadership of the party through a series of court applications and cancelled elective congresses.

“Procrastination and application for indefinite postponements, continuous postponement of elective congresses… it is an assumption of leadership,” Heunis told the court.

Since Cope’s formation in 2008, the “Lekota faction” had resorted to the courts to prevent elective congresses, to overturn a motion of no confidence in Lekota, to interdict congresses and expel adversaries — at least 22 so far. He had taken control of finances and staff were not paid.

“This all to neutralise Shilowa,” he said.

Heunis said he knew the court did not like getting involved in political matters, but said the court was needed to resolve this dispute so that the parties could canvass fairly among its members.

Shilowa was present in the packed court, with co-founder Mluleki George, a former deputy defence minister, but Lekota was absent.

Heunis submitted that the order against Shilowa should not have been granted in the first place, and that it could not continue to apply due to postponements.

Monday and Tuesday’s postponements were brought on by the illness of Lekota’s main counsel. New counsel was not familiar with all the details of the case and needed time to prepare.

Heunis said Cope was a voluntary organisation. According to its constitution it did not belong to its leaders, but to its members.

“The Lekota faction was not democratically elected,” he contended.

Shilowa is a former Gauteng premier, and Lekota a former minister of defence.

Speaking on the sidelines of the hearing, Shilowa said he had not been paid since the order and was funding the court application himself for the sake of “internal democracy”.

Judge Fritz van Oosten postponed the matter indefinitely, but said it was hoped that December 5 could be secured to have the matter heard.

He did not lift the order.

Shilowa said outside the court that he had been ready for the original four days set down for the matter, but accepted the postponement.

Costs were awarded to Shilowa for two counsel for the waste caused by the postponement. — Sapa