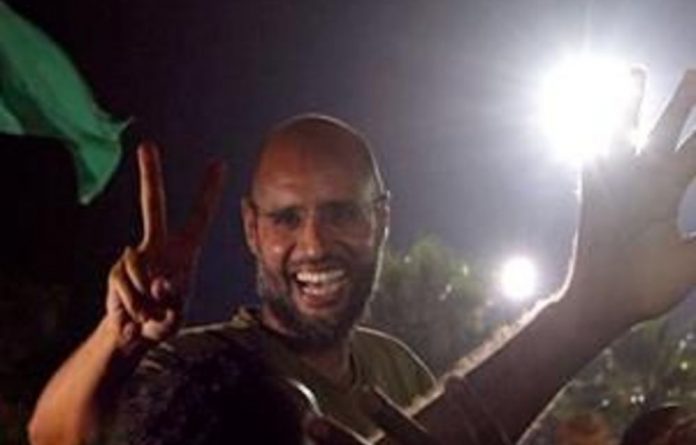 A son of Muammar Gaddafi who rebels said they had captured made a surprise appearance with jubilant supporters in Tripoli overnight and issued a rallying cry to loyalists to fight off opponents who say they control most of the Libyan capital.

Saif al-Islam, who has been seen as his father’s heir apparent, visited the Tripoli hotel where foreign journalists are staying to declare that the government was winning the battle against the rebels.

He took journalists to his father’s Bab al-Aziziyah stronghold. Television footage showed Saif smiling, waving and shaking hands with supporters, as well as holding his arms aloft and making the V for victory sign.

“We broke the back of the rebels. It was a trap. We gave them a hard time, so we are winning,” Saif said.

Saif’s arrest had been reported both by rebels and the International Criminal Court in The Hague and his appearance before the foreign media raised questions as to the rebels’ credibility.

He said Tripoli was under government control and that he did not care about the arrest warrant issued by the International Criminal Court seeking him and his father for crimes against humanity.

Gaddafi himself has not been seen in public for several weeks before the rebels arrived in the capital at the weekend. But when asked if his father was safe and well in Tripoli, Saif told journalists: “Of course.”

World leaders urged Gaddafi (69) to surrender to prevent more bloodshed and appealed for an orderly transition of power, as the six-month-old battle for control of the oil-producing North African nation appeared to enter its final stages.

Firefights
Rebels swept into Tripoli two days ago in tandem with an uprising within the city. Reuters reporters saw firefights and clashes with heavy weapons, including anti-aircraft guns, as rebels tried to flush out snipers and pockets of resistance.

Hundreds seem to have been killed or wounded since Saturday. But Gaddafi tanks and sharpshooters appeared to hold only small areas, mainly around the heavily fortified Bab al-Aziziyah compound in central Tripoli.

Civilians, who had mobbed the streets on Sunday to cheer the end of dictatorship, stayed indoors as machine gun fire and explosions punctuated some of the heaviest fighting of the Arab Spring uprisings that have been reshaping the Middle East.

US President Barack Obama, saying the conflict was not over yet, cautioned rebels against exacting revenge for Gaddafi’s brutal rule. “True justice will not come from reprisals and violence,” he said.

The president also made plain that the United States would oppose any group within the loose coalition of rebels from imposing its power over other parts of Libyan society.

“Above all we will call for an inclusive transition that leads to a democratic Libya,” Obama said.

In an audio broadcast on Sunday before state TV went off the air, Gaddafi said he would stay in Tripoli “until the end”. There has been speculation, however, he might seek refuge in his home region around Sirte, or abroad.

In a sign Gaddafi allies were still determined to fight, Nato said government forces fired three Scud-type missiles from the area of Sirte towards the rebel-held city of Misrata.

Bab al-Aziziyah, a huge complex where some believe Gaddafi might be hiding, was the focal point of fighting in Tripoli.

“I don’t imagine the Bab al-Aziziyah compound will fall easily and I imagine there will be a fierce fight,” Abdel Hafiz Ghoga, spokesperson for the rebel Transitional National Council, said in an interview aired by Al-Jazeera.

The Arab network, quoting its correspondent, said violent clashes were also reported near the oil town of Brega.

Rebels had initially said they held three of Gaddafi’s sons, including Saif al-Islam. Al-Jazeera TV said that one of them, Mohammed, had escaped, adding that the body of another son, military commander Khamis, might have been found along with that of powerful intelligence chief Abdullah al-Senussi.

Reprisal, revenge
Western powers are concerned that tribal, ethnic and political divisions among the diverse armed groups opposed to Gaddafi could lead to the kind of blood-letting seen in Iraq after the overthrow of Saddam Hussein.

In a move that could ease tensions, a rebel official in the eastern city of Benghazi said, however, that efforts were under way to make contact with authorities hitherto loyal to Gaddafi.

Foreign governments which had hesitated to take sides, among them Gaddafi’s Arab neighbours and Russia and China, also made clear his four decades of absolute power were over.

A US State Department spokesperson said Libyans who said they represented Gaddafi were making “more desperate” efforts to negotiate with the United States in the last 24 to 48 hours.

Washington did not take any of them seriously because they did not indicate Gaddafi’s willingness to step down, she added.

French President Nicolas Sarkozy, who took an early gamble on the rebels and may now reap diplomatic benefits, called on the Gaddafi loyalists “to turn their back on the criminal and cynical blindness of their leader by immediately ceasing fire”.

Late on Monday, Sarkozy spoke to Britain’s David Cameron by telephone about the Libya situation, according to a press release from the French presidential palace.

“They both agreed to pursue efforts in supporting the legitimate Libyan authorities as long as Colonel Gaddafi refuses to surrender arms,” the statement read. Paris has offered to host a summit on Libya soon.

Nato has backed the revolt with air power but eschewed the ground combat that cost US and allied lives in Iraq and Afghanistan.

Britain’s International Development Secretary Andrew Mitchell told the BBC there was no possibility of British military involvement being expanded in Libya.

“We do not see any circumstances in which British troops would be deployed on the ground in Libya,” he said.

But some governments have had civilian advisers in Benghazi for months, and the swift military advance of recent days revived questions about the shadowy role of foreign special forces on the ground.

First signs emerged of moves to begin restoring oil production that has been the foundation of the economy and a source of hope for Libya’s six million, mostly poor, people. Staff from Italy’s Eni arrived to look into restarting facilities, said Foreign Minister Franco Frattini.

Italy, Libya’s nearest European neighbour and the colonial power until World War II, is a big customer for Libyan energy. But it will face stiff competition from others seeking a share of Libya’s wealth — a competition some fear could test the ability of untried rebel leaders to hold the country together.