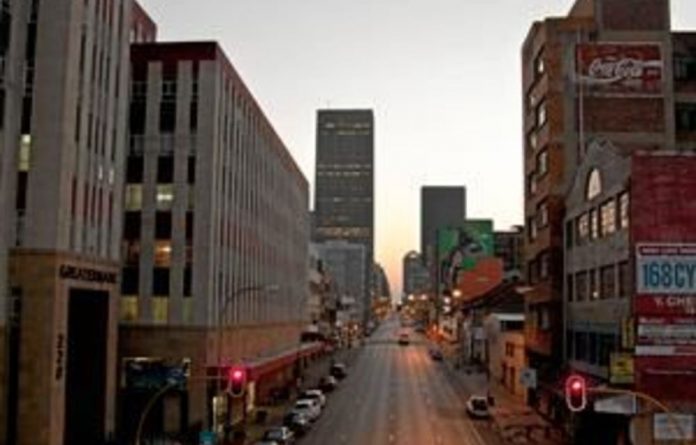 The geography of post-apartheid Johannesburg remains stained by apartheid divisions and has also given birth to new forms of exclusion. This is the central claim of Martin Murray’s new book, City of Extremes: The Spatial Politics of Johannesburg.

Murray traces the historical development of the city from its origins as haphazard mining settlement to vast and fragmented metropolis.

From the time of the early Randlords to today’s paranoid suburbanites, the author argues, the fears and longings of the wealthy and the whims of real estate investors have shaped Johannesburg.

The underside of this has been continual and convulsive building, leaving ruin in its wake, along with a sustained assault on poor and marginal, mostly black, populations, that continues today. In a wonderful phrase he explains that in Johannesburg “form follows fear”.

Historical landscapes
Murray, a social geographer from the University of Michigan, provides an intricate map of the city over time and, drawing from over a decade of research, provides an immensely detailed and impressive piece of scholarship. Murray writes from a loosely Marxist perspective and pays particular attention to the spatial relationships of the city and its architectural landscape.

He documents the extremity of present-day Johannesburg, from its inner-city slums to corporate citadels and the faux-Tuscan aberrations of it peripheries (he notes wryly the comment of a property investor that “no developer has lost money underestimating the taste of South African home buyers”).

Johannesburg, argues Murray, remains characterised by “huge gaps between the frightened rich and the resentful poor, [and is] a schizophrenic cityscape of sequestered enclaves intermingled with derelict sites and concentrated pockets of inner-city impoverishment — and ringed with informal shanty settlements where the jobless, the poor, the dispossessed, and the socially excluded are abandoned to their own struggle for survival.”

Murray contends that the post-apartheid vision of an inclusive city has been largely abandoned in favour of an attempt to be a world-class metropolis. City governors have mostly given priority to the needs of commerce over the poor, even in inner-city improvement districts. The result has been a fragmented mosaic of new business and residential enclaves, corporate citadels and gated communities. In this process, the needs of large numbers living in near destitution have been sorely neglected.

Immensity of the cityscape
The arguments and exposition of the work are intricate, expansive and often convincing. I have several reservations, however, about the book’s style and argument. First, it is not an easy read. The experience is a bit like being stuck on the M1 in traffic. In the same moment that one is impressed by the immensity of the cityscape, one is also frustrated by the pace at which the journey unfolds.

Sentences are often polluted with a dense fog of abstract nouns (“contingency”, “indeterminacy”, “fluidity”) with few spaces of clear air where one can take a breath and reflect. There are none of the life stories that animated Murray’s previous, and more readable work, Taming the Disorderly City.

City of Extremes also restates the same points incessantly, including those of his previous book. Perhaps the author contracted the expansionist fever of the real-estate developers he constantly rebukes.

The pity is that Murray can also write sentences of beautiful precision; for instance: “The Johannesburg inner city has always been a place in transition, defined as much by successive waves of newcomers embarking on uncertain journeys to the future as by fading memories of the disappearing past.” The complex social reality and experiences of the city are often lost, however, as the book moves across its expanse of subject matter.

Murray has argued elsewhere (in his own review of Johannesburg: The Elusive Metropolis edited by Achille Mbembe and Sarah Nuttall) that inquiries into the city must attend to both political economy and culture. This work certainly errs on the side of the former.

The social exploration too often lapses into easy class tropes (“roving bands of the homeless”, “the deracinated” and the “sheltered, myopic, middle class”). There is little discussion given to ways people attempt to negotiate social divisions or to the informal networks that criss-cross the city.

Ignoring the details
In this vein, city governance is also treated too homogenously and reductively. Aside from the fact that Murray has nothing positive to say about anything the city government has done in the 17 years since the end of apartheid, he gives little attention to the debates and differences within it, nor to the national or regional politics that shape city management. In this, like the fortified banking complexes he brilliantly describes, Murray’s focus is sometimes single-minded and inward-looking.

The work is most effective when it attends to the complex interactions between commerce, security, law and society as it does in the chapter on the inner city, titled “Worlds Apart”. In it he explores the outcomes of corporate flight from the inner city and how marginalised groups, including thousands of migrants, have been left to live in appalling conditions with few options for decent low-cost accommodation.

Murray argues that the inner city is not only a space of infrastructural decline, but also a place in which marginal classes have to negotiate the intimidation of police and bureaucracies acting on the threshold of the law. In this space new hierarchies and forms of exclusion develop among the poor, including xenophobic violence. Amid this all, though, there is also a potential for new forms of solidarity and social life.

In spite of its shortfalls, this is a book that should be read with attentiveness. It traces the lines of a city in which profound daily violence and suffering coexist with theatrical excess. It shows in convincing breadth that although the living conditions of suburban enclaves and those who dwell in abandoned buildings of the inner city may be “worlds apart”, they are also closely connected to one another, and part of the same historical and economic processes.

This proximity and distance reveals itself constantly in the daily life of Johannesburg. As Murray observes, “as darkness falls, the flickering cooking fires that mark the countless squatter encampments scattered haphazardly across the urban landscape seem incongruously out of place in the modern, cosmopolitan city of automobile-choked freeways, dazzling skyscrapers and luxurious shopping malls”.

Matthew Wilhelm-Solomon is a researcher at the African Centre for Migration and Society. He will be in Session 2, “Jo’burg: Renewing, Restoring, Reviewing”, chaired by Steven Sack, with fellow panellists Gerald Garner, Noor Nieftagodien and Achille Mbembe. The panel is at Kippies on September 3 from 11.30 am to 1 pm

Moms in a park is a mother of a story