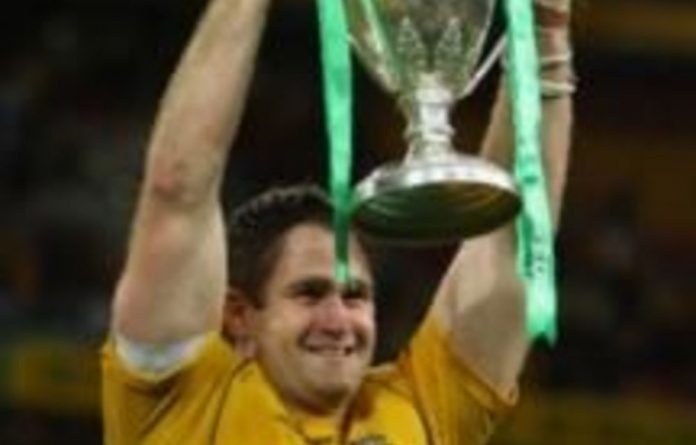 Kurtley Beale finished off a brilliant sweeping movement to give Australia enough breathing space to beat New Zealand 25-20 on Saturday and win the Tri-Nations title for the first time since 2001.

The Wallabies withstood a furious second-half revival from the All Blacks, who scored 17 unanswered points to level the score at 20-20 after they had allowed the home side to establish a 17-3 lead at the break.

A storming, 60 metre solo effort from recalled Wallaby number eight Radike Samo helped the Australians to their commanding lead in the first half in which the home side dominated every facet of play with the All Blacks looking sluggish.

It was a half punctuated with errors for the All Blacks, who looked to be suffering the effects of their long trip back from South Africa and the Australians collected points consistently, going out to a 10-0 lead in the first 15 minutes.

Quade Cooper opened the scoring for the Wallabies with a penalty in the third minute and Genia went over for a try in the 12th minute when the television match official incorrectly awarded the Australians an attacking five-metre scrum.

Dan Carter responded with a penalty in the 23rd minute but it was Samo, returning from the international rugby wilderness having not started a test match since 2004, who lit up Lang Park with a bullocking 60-metre run to the line to give the home side a 20-3 lead at the break.

The All Blacks were a completely different side in the second half, scoring 17 unanswered points as they controlled possession and built phases, with Carter adding his second penalty before Conrad Smith and Ma’a Nonu both scored tries to tie the score at 20-20.

Beale, however, gave the Wallabies the crucial try that allowed them to hold on and win their third Tri-Nations title. — Reuters