Irene closes in on New York after battering East Coast 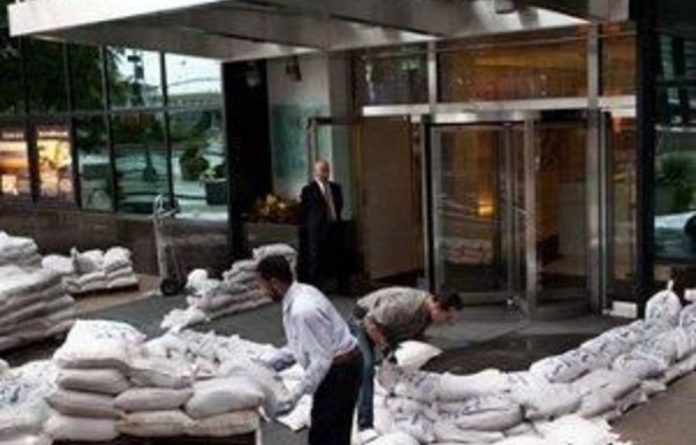 Hurricane Irene closed in on New York on Saturday, shutting down the city, and millions of Americans on the East Coast hunkered down as the giant storm halted transport and caused massive power blackouts.

Before midnight, Irene, still a menacing 780km-wide hurricane, was enveloping major population centres in the US northeast with drenching rain and driving winds, threatening dangerous floods and surging tides.

“The edge of the hurricane has finally got upon us,” New York Mayor Michael Bloomberg told the more than eight million people who live in the United States’ most populous city that includes Wall Street, a major world financial centre.

He warned that tropical storm-force winds were expected to start hitting the city.

From the Carolinas to Maine, tens of millions of people were in the path of Irene which howled ashore in North Carolina at daybreak, dumping torrential rain, felling trees and knocking out power.

After moving across North Carolina with less punch than expected but still threatening, the hurricane re-emerged over inshore waters on its route northward, hugging the coast.

At least seven deaths were reported in North Carolina, Virginia and Florida. Several million people were under evacuation orders on the US East Coast.

The Chesapeake Bay Bridge-Tunnel, which connects Virginia’s Eastern Shore with the the mainland and is regarded as a modern engineering wonder, was closed because of the winds and rain.

This year has been one of the most extreme for weather in US history, with $35-billion in losses so far from floods, tornadoes and heat waves.

President Barack Obama, who cut his vacation short on the Massachusetts island of Martha’s Vineyard to return to the White House, was keeping a close eye on preparations for the hurricane.

Commuters were left to flag down yellow taxis and livery cabs that patrolled largely deserted streets.

The Coast Guard closed the port of Philadelphia, while New York Harbour remained open with some restrictions.

With winds of 130km/h, Irene was a Category One hurricane on the five-step Saffir-Simpson intensity scale.

As it moved into New York, the US National Hurricane Centre said it was expected to remain a hurricane and weaken only after making its second landfall in New England.

Bloomberg repeatedly told New Yorkers Irene was a life-threatening storm and urged them to stay indoors to avoid flying debris, flooding or the risk of being electrocuted by downed power lines.

“It is dangerous out there,” he said, but added later: “New York is the greatest city in the world and we will weather this storm”.

About 370 000 city residents were ordered to leave their homes in low-lying areas, many of them in parts of the boroughs of Brooklyn and Queens and in downtown Manhattan.

But many were unwilling to evacuate. Nicholas Vigliotti (24) an auditor who lives in a high-rise building along the Brooklyn waterfront, said he saw no point. “Even if there was a flood, I live on the fifth floor,” he said.

The hurricane centre said that Irene’s winds could be felt more strongly on the higher floors of skyscrapers.

Storm surge fears
The Miami-based hurricane centre forecast a storm surge of up to 2.5m for Long Island and metropolitan New York when Irene passes on Sunday. That could top the flood walls protecting the south end of Manhattan if it comes at high tide at about noon GMT.

When Irene hit the North Carolina coast at daybreak, winds howled through the power lines, rain fell in sheets and streets were flooded or littered with signs and tree branches.

Hundreds of thousands of people in Irene’s path evacuated their homes, many taking refuge in official shelters.

“Things can be replaced, but life can’t be,” said Robert Hudson, a 64-year-old military retiree, who sought refuge at a shelter in Milford High School in Delaware.

Two people were killed by falling trees in Virginia, one a young boy. Irene caused four deaths in North Carolina.

North Carolina Governor Bev Perdue said there could be “a major hit” to tobacco crops, poultry and livestock in her state.

Torrential rain hit downtown Washington but expected high winds had still not reached the city after nightfall and restaurants remained open, some of them almost full.

Irene was the first hurricane to hit the US mainland since Ike pounded Texas in 2008. Emergency workers were mindful of Hurricane Katrina, which swamped New Orleans, killed up to 1 800 people and caused $80-billion in damage in 2005.

Defence Secretary Leon Panetta said the military stood ready to help. In Washington, Irene forced the postponement of a ceremony on Sunday to dedicate a new memorial to civil rights leader Martin Luther King Jr. Tens of thousands of people, including Obama, had been expected to attend.

Irene swept through the Caribbean as a Category Three hurricane earlier in the week, bringing floods that killed one person in Puerto Rico and at least three in the Dominican Republic. – Reuters

Ned Barnett
Ned Barnett works from Las Vegas. I've been in politics since I was the local Young Republicans' mascot in the Goldwater campaign, & active ever since. Blogging on conservative issues...
Facebook
Twitter
WhatsApp
Linkedin
ReddIt
Email
Print