What Saif al-Islam Gaddafi’s bad art says about him 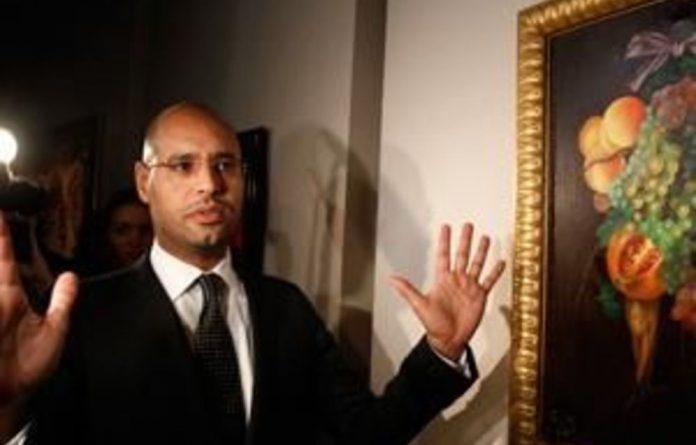 Bad artists are not necessarily bad people. At least, I have no proof of this. But the case of Saif al-Islam Gaddafi demonstrates that in some cases the readiness to inflict one’s dearth of artistic talent on a helpless world may be a sign of far worse behaviour to come.

Back in 2002, the son and would-be heir of Muammar Gaddafi, who in defence of his father and his future has proved to be such a bloodthirsty and dangerous character, staged an exhibition of his art in London. He was not yet known as a destroyer — in fact, he was claiming to be a creator. The Desert Is Not Silent was held in a specially built pavilion in Kensington Gardens. I had my fun with his daubs of roses, horses and clenched fists in a Guardian review. These paintings, I concluded, “just end up confirming all the old stereotypes about dictators, or dictators’ sons. Ever since Nero there has been a depressing connection between bad art and megalomaniac regimes: Hitler the opera lover, architect and painter; Stalin the poet —”

Kitsch delights
This week, the cliches about dictators and art have been confirmed all over again. Rebels who rushed the Gaddafi compound stamped on a golden image of the dictator’s face and clambered on a giant sculpture of a fist crushing an American jet. Soon the private delights of the Gaddafi family were being discovered, from a golden sofa in the shape of a mermaid in Aisha Gaddafi’s mansion to bespoke wallpaper with a desert design and a photo album dedicated to Condoleezza Rice.

The association of tyranny and kitsch art is real and it is slightly mysterious. It was first remarked on by ancient Roman historians 2,000 years ago. Suetonius in The Twelve Caesars tells how Tiberius decorated his villa at Capri with pornographic murals and Tacitus in the Annals relates how Nero profited from the fire of Rome by building a colossally ostentatious new palace on the ruins. You can visit that palace, the Domus Aurea — Golden House — and for all the beauty of the frescoes this place is chilly, slightly inhuman, and charmless.

Much like the houses and labyrinth of tunnels and bunkers (Nero, too, had his Cryptoporticus or underground passage) now being laid bare in Tripoli. Wealthy with oil, the Gaddafi family coiled splash gold about like cushions. Yet as with Nero’s Golden House, the interiors seem charmless, cold, impersonal. Perhaps tyrants use art to replace an absence of true interaction. Perhaps they live an entirely public, unreal existence like Louis XIV, and what we are seeing is not personality but court culture. What is certain is that Gaddafi and his children have lived up to the most florid myths of the dictator as self-indulgent connoisseur of monster art.

Living up to expectations
It seems a moment for western self-congratulation as Nato jets bring about this family’s fall. The artistic excesses of the Gaddafi house style more than live up to the image of the dictator as Neronian monster, now brought down with our military aid. These decorations are the visible signs of deviant rule. They even live up to western images of oriental despotism as typified by Delacroix’s painting The Death of Sardanapalus.

But looking back at Saif al-Islam Gaddafi’s 2002 art show, I can’t help noticing how different — and how scandalous — the real story of our relations with Gaddafi has been from one in which a tyrant is brought down by heroic helpers from the west.

Here is a story in which nothing anyone said meant anything, in which truth could be stood on its head at a moment’s notice, and morality — like art — could be reinterpreted at will.

I don’t want to blow my own trumpet for telling how it really looked in that 2002 art review — but the fact is that I was not part of a pack of critics all lining up to sneer at Gaddafi’s art. My disdain was, at the time, almost eccentric. At that moment, it was not being widely said that Saif was some kind of monster. Even in my harsh review of his “incredibly undistinguished” art I bowed to the mood of the moment with a comment that “cultural links with Libya are obviously desirable —”

Keeping us in his pockets
If there is one thing I know it is that bad reviews do not destroy artists. The real historical fact about The Desert Is Not Silent is not that some guy gave it a bad review but that it happened, got television coverage, and occupied a prestigious public park, like a one-man version of the Frieze Art Fair. In my naive way, I had no idea how it played a part in Saif al-Islam’s disturbingly effective assault on the cultural institutions of the west. I raged at the paintings but did not notice the corporate sponsors who supported the show on its world tour. I pictured this painter as a dictator’s son indulging Caligula-like artistic pretensions and failed to see the side of him that would get Saif al-Islam a PhD from the London School of Economics. That is, I failed to imagine the extent of British collusion with the Gaddafi regime.

To put it another way: the truth was blindingly obvious in 2002. The exhibition was an ugly display of power, not in Libya, but in London. It pushed the most grotesque symptoms of dictatorship and tyranny in the face of anyone who cared to see them: not just the awful paintings but the fact of their being vaunted as worthwhile art in a fancy exhibition spoke of hideous self-delusion and imposture. Everything that is obvious as we contemplate the golden mermaid and jet-crunching fist was already obvious in that exhibition. It was obvious for that matter in all that Colonel Gaddafi ever said and did.

So there is something false about our readiness, now, to revel in the bad taste of the Gaddafi family as if it revealed a moral truth we are just discovering. We always knew it, and Muammar Gaddafi’s presumptive heir went to the trouble of exhibiting his inner mind in the heart of London in paintings that were just as strange as anything being photographed in Tripoli this week.

There is absolutely nothing for Britain to be complacent about here. The open secret of dictatorial monstrosity was paraded before us and tolerated, as a charming eccentricity, by those whom it suited to ignore reality. It will take more than a generosity of bombs to live down such wilful blindness.

Will Tunisia continue to democratise?

Neoliberalism and the march of impunity in Equatorial Guinea

How does the world's longest serving autocrat remain in power?
Read more
Africa

How democratic revolutions are being subverted in Algeria and Sudan