Book extract: Metal that Will Not Bend by Kally Forrest 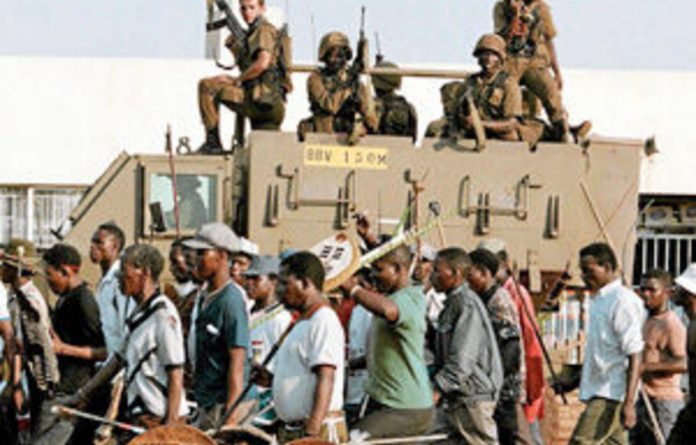 In this edited extract from Metal that Will Not Bend: National Union of Metalworkers of South Africa 1980 -1995 (Wits University Press), Kally Forrest recounts the violence that has surrounded the union.

In 1993-94, as ANC/IFP conflict engulfed the region [Transvaal], serious violence broke out at Scaw Metals. Mawu’s base in the hostel fractured and the violence linked into the broader conflict that swept across the East Rand. The months following the 1992 engineering strike saw a series of anonymous killings on company property, including an incident in 1993 when unknown men hijacked a vehicle on a private road, made seven Numsa members lie down and shot them dead. A week later, 12 workers were killed and many injured when gunmen again opened fire on Scaw property. National organiser Bernie Fanaroff commented: “We believe the shootings were intended as a provocation aimed at stirring up trouble in a hostel where workers of different political persuasions have coexisted peacefully.”

Refusing to discuss the violence, management responded by asking workers to invite political organisations to address them. Numsa rejected the proposal, believing it would deepen divisions.

In the hostel non-Zulu and vocal Numsa supporters were forced out or killed. Murray remembers: “… one particular guy, a vocal Xhosa-speaking guy, very vocally anti-IFP in the hostel — he got eliminated.” Reprisals followed. Shortly before the 1994 general election, when another group of Numsa members was waylaid and murdered, the entire Cosatu leadership visited Scaw in an effort to douse the conflagration and discourage reprisals. In time the hostel became an Inkatha stronghold. In all, 60 Scaw workers were killed in and around the company. Murray believes that Inkatha on the East Rand initially had the upper hand as it was better prepared.

Later, however, as ANC defence units became better armed and organised, Zulu migrants came under siege in their hostel.

Numsa demanded that management close the hostel to avert further attacks but the company insisted it would protect its Zulu workers who were stridently demanding that Scaw keep it open. The hostel, according to Murray was “… turned into a fortress. It was barbed-wired, hyper-security. You couldn’t just come into the hostel.”

At first allegiances in the hostel were mixed. Some Zulu-speakers remained neutral, inactive members of Numsa, others, in fear, resigned.

Over time, with an influx of new migrants, a traditional induna leadership took over, which was mainly concerned with defending Inkatha and Zulu workers. After the launch of the IFP, however, a hardline, non-union core emerged which viewed hostels as strategic in a war to extend Inkatha’s influence and which was dedicated to discharging higher IFP instructions.

The union persisted in its calls for the hostel’s closure. It told management that on worker intelligence it had information that arms were being smuggled into the hostel, possibly for wider use in the East Rand war. Murray confirmed: “Zulus had arms, as they were protecting themselves and it became a stronghold … Arms were being smuggled in and out of the hostel. There were trains coming by. We had one police raid where they did discover arms. Found ten AK47s.” However, the company refused to raid the hostel.

It was the killing of Numsa head shop steward Christopher Manyati, brother-in-law of the ousted Samuel Manyati, in 1995, which finally shifted management. After fleeing the hostel, Manyati was lured back on a pretext and shot. “His brains pouring out on the ground when we arrived,” said Murray. “— not a soul in sight.” When seven mourners at Manyati’s funeral were killed a week later, alarmed workers downed tools. A reluctant management decided to close the hostel. “We would have faced unbearable pressure [from Numsa] if we hadn’t,” Murray said.

A delicate negotiation ensued, as Zulu hostel-dwellers feared moving out into townships and the amaButho was angered by the possible loss of a military base. Murray described it as “… a balancing act to squeeze the Zulu IFP out of the hostel but not provoke them into death-defying wild retaliation.” With IFP funding, the hostel-dwellers took Scaw to court, arguing that it was breaking migrants’ employment contracts, and won the case. After a period of attrition during which hostel dwellers were threatened with the turning off of water, and were offered R2 000 to vacate the hostel and with, as Murray recalls, “Numsa baying at our heads”, the hostel was closed and violence ended.

Other Numsa factories on the East Rand also suffered from Uwusa’s forced recruitment activities. Soon after the Cosatu stayaway and IFP launch in 1990, three National Springs workers were killed, while there were violent clashes between workers at Macsteel, Dorbyl, National Bolts and factories in Cleveland and Jeppe. Numsa members were attacked without provocation in such factories as NF Die Casting, Screenex, Wispeco, Crown Cork, Boart Hard Metals, Genrec, Chubb Locks, NIP, Haggie Rand and Steelworld.

By 1993, when the violence fanned across the region, attacks occurred in communities, and Numsa was again targeted. The violence also shifted on to trains and their surrounds. In certain factories where shop stewards could not hold general meetings, workers reverted to the old tactic of meeting in trains to plan and to raise morale by singing struggle songs. In 1993, for example, Numsa member Harriet Mtshali was killed by Inkatha attackers at Jeppe station while returning from a Cosatu march to the World Trade Centre. In 1994 Numsa member George Mushe was shot in full view of commuters on the platform at Merafe station. By 1993, train attackers were freely opening fire on commuters, and by June some 400 people had been killed in this way.

Ntuli recalled the 1993 retaliatory carnage at the Hokai shopping centre and taxi rank in Wadeville following the killing of IFP member Bheki Sokhele:
“One of the most terrible moments for me in my whole time in the union was the killing outside Hokai —where 32 people were killed and 19 were Numsa members.

“It was knock-off time, 4.45, then the guys came from the railway line at the back of the shops, and others were across the road, and the shooting happened from both sides. Then as people started to run they were shooting left and right at them. It was all working people. People were running, trying to get inside the shops.”

The security forces, which throughout the 1980s had harassed union members and officials, also conducted their own sinister operations. By creating a climate of fear in which people were reluctant to attend meetings and organise openly, they hoped to retard organisation. Militarised IFP groups were used, but many atrocities were committed by faceless vigilantes.

Kally Forrest is the editor of the South African Labour Bulletin. She will be in Session 5, “Workers of the World Unite: Labour, the ANC and History”, chaired by Nic Dawes, with fellow panellists Susan Booysen and Moeletsi Mbeki. (Main Theatre, Saturday September 3, 2.30 to 4pm)