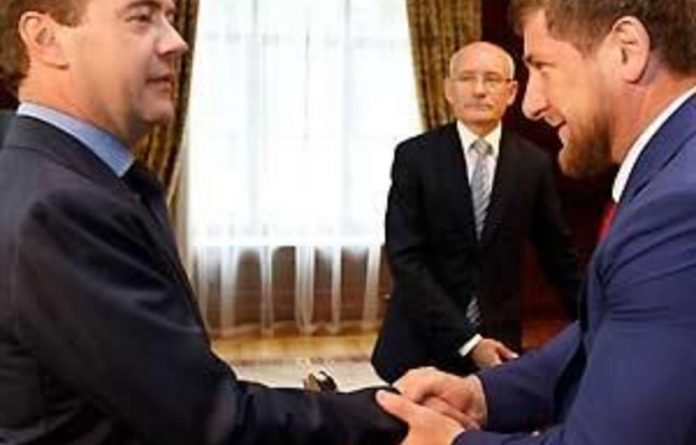 Three suicide bombers blew themselves up on Tuesday evening in the Chechen capital Grozny, killing five policemen, an emergencies ministry official and a passer-by, and wounding more than 20.

The attacks came as Muslims celebrated Eid al-Fitr, the feast marking the end of the Ramadan holy month of fasting.

The first suicide bomb went off as police were attempting to detain a suspect on a street near the parliament building in Grozny to check his papers.

“Two policemen died in the first blast,” said Karimov, denying however that the militants had targeted the parliament itself.

Second wave
The second blast came quickly afterwards at the same place and was triggered by two more suicide bombers who simultaneously detonated their explosives in the crowd, a spokesperson for regional investigators said.

Multiple suicide bombings have been the hallmark of militants fighting to establish an independent Islamic state across the North Caucasus.

Investigators said they identified two of the three suicide bombers as local men in their early twenties.

Karimov said separately that one of the suicide bombers was the brother of an attacker who blew himself up near a Grozny theatre last year.

The three explosives had a strength of around 3kg of TNT, investigators said.

Long history of civil strife
The Kremlin has been fighting insurgents in the North Caucasus since the 1991 collapse of the Soviet Union, waging a war in 1994-1996 against separatist rebels in Chechnya.

After a second war in Chechnya in 1999, the rebellion’s inspiration moved towards Islam with the aim of imposing an Islamic state in the region.

Although the war ended in 2000, rebels have waged an increasingly deadly insurgency, with the unrest spreading into other areas of the North Caucasus.

Alexei Malashenko, a Caucasus analyst at the Carnegie Moscow Centre, said the latest attack, timed to coincide with one of the most popular Muslim holidays, was a deliberate “slap” in Kydyrov’s face.

“The explosions showed that there is no stability in Chechnya, which is required of him,” Malashenko told AFP.

Authorities led by Prime Minister Vladimir Putin have in recent years relied on Kadyrov, who has been criticised by rights groups for allegedly using his personal militia to torture and kill opponents, to keep violence in Chechnya in check.

The Kremlin in 2009 ended the so-called anti-terror regime in Chechnya, saying peace returned to the war-ravaged region. — AFP