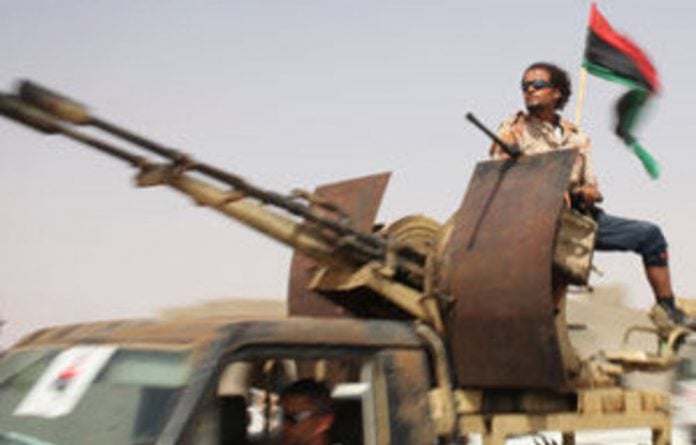 When Muammar Gaddafi’s soldiers fled this corner of a field outside Tripoli where they were camped, they left behind their army fatigues, a can of Brut deodorant — and a Scud tactical missile.

Days later, the Soviet-made rocket, loaded on its launch truck and pointing towards the Libyan capital, is still sitting under the eucalyptus trees where they left it. The motley rebel forces who overthrew Gaddafi two weeks ago have set up no guard to prevent anyone taking it away or looting it for parts.

Western powers and Libya’s neighbours fear that the power vacuum could allow huge quantities of unsecured weapons left over from the civil war to end up in the hands of Islamist militants, in particular the North African branch of al-Qaeda.

Officials with Libya’s interim government, the National Transitional Council, say they are trying to secure these weapons. But there was little evidence of that at the Scud site, in farmland about 25km south-east of Tripoli.

Abdelhamid Omar Derbek, a colonel at the local anti-Gaddafi military headquarters, said he and his men visit the site several times a day.

“I patrol here … and there is another shift that does it as well,” said Derbek, who had a Kalashnikov rifle slung over his shoulder but whose military rank was not evident from his outfit of yellow Lacoste T-shirt, jeans and sandals.

For all his assertions of supervision, however, Derbek is based at a military facility about 15km away. He drove with a team of Reuters journalists from his camp to the site on Sunday but there was no one stationed there to guard it. A group of curious local people were looking around.

“I heard about it last night and I wanted to come and take a picture,” said one of the visitors, who said he worked for an oil company.

Gift for insurgents
A Scud-launching complex, consisting of an 11m rocket with a range of up to 300km depending on the variant, could be a valuable resource for any insurgent.

Even without launching it, the warhead alone contains up to a tonne of high explosive, which could be stripped from the missile and used to make improvised bombs for urban guerrillas.

“Algeria has been terrified throughout this conflict of stocks like this, explosive devices, being taken out of Libya and used by al-Qaeda in the Islamic Maghreb.”

It is unlikely militants could steal the whole system and fire the missile. There was no sign at the site of any of the liquid fuel that propels the missile. This is stored separately because it is corrosive, and it has to be loaded into the missile before firing. “It is not useful to a militant unless they have a source of liquid fuel nearby,” said Joshi.

Operating the missile also requires skilled technicians, he said, but it is theoretically possible that al-Qaeda could find these. After the Red Army pulled out of Afghanistan in 1989, mujahideen fighters — some of whom later joined al-Qaeda — obtained stocks of Soviet Scuds and learned how to fire them.

In an interview with Reuters on Friday, the senior European Union representative in Tripoli said the bloc was concerned that Islamist militants could obtain weapons in Libya and take them out across the country’s largely unpoliced borders.

“This is an evident risk,” said EU envoy Agostino Miozzo.

The NTC — preoccupied with trying to catch Gaddafi, defeat his supporters in their remaining strongholds, and deal with shortages of fuel and water — says securing the arms is a priority but not something that can be done straight away.

“Of course we are in a state of war, and Gaddafi definitely left some weapons and mines,” General Omar Hariri, one of the interim government’s senior military commanders, told reporters in Tripoli last week.

“We have a group of military engineers who are specialised in finding out and digging out such weapons and such mines and it is only a matter of days before we are clearing all of these mines and gathering Gaddafi’s weapons,” he said. “We are still in a state of war so it’s very normal, it’s very natural.”

Hurried departure
The Scud site is next to a highway leading east out of Tripoli and a short distance from a depot operated by US oil services firm Schlumberger.

It provided a glimpse of how Gaddafi’s forces had planned to use their military hardware for a last-ditch fight and then, when defeat became inevitable, hurriedly abandoned their posts.

In total there were four mobile missile launchers parked within a radius of about 500m at the site.

All the launchers had been covered to mask them from Nato warplanes — they were draped in camouflage netting and parked under trees or sunk into trenches which local people said had been dug out by an excavator.

Only one of the launchers had a missile mounted on it. It was not clear what had happened to the other rockets, though it appears they had not been used in the conflict.

“We do not know,” said Abdelmounem Sabri, another colonel attached to the anti-Gaddafi military facility 15 km away.

“They were not fired.”

One of the launchers, without a missile on it, had been destroyed by a Nato air strike, leaving just a charred skeleton and scorching the eucalyptus tree it had been parked next to.

Scattered in the sand around the launcher that was still loaded with a missile were about half a dozen anti-personnel mines, which appeared to have been dropped by the crew in their rush to leave.

The canvas bags used to carry the mines were lying nearby.

Colonel Derbek, giving a tour of the site, picked one of the mines up and nonchalantly waved it in the air.

All of the intact Scud launchers seemed to be in working order. Dozens of cans of grease were thrown on the ground next to them, evidence that the crews had been keeping their mechanisms oiled and ready for action.

At the armed launcher, the hydraulic control cables were plugged in to their sockets. The console that controls the stabiliser jacks on the launcher — used to hold the unit steady for firing — was attached by cables and sitting in the sand, ready to use.

The crews had been living in a half-finished house a short distance away, most likely because they feared Nato strikes and did not want to camp right next to the Scud battery.

At the house, there were more signs of a hasty departure. A traditional Arab water pipe was still primed with scented tobacco. On flimsy mattresses on the floor lay strewn razors, deodorant, toothbrushes and a pack of vitamin C tablets.

Where the crews have gone, taking with them their expertise and, possibly, a grudge against Libya’s new rulers, is anyone’s guess. Five pairs of olive drab combat pants and six fatigue jackets lay at the site — Gaddafi’s missile-men seemed to have changed into civilian clothes and melted into the population. – Reuters