Women at the mercy of climate change 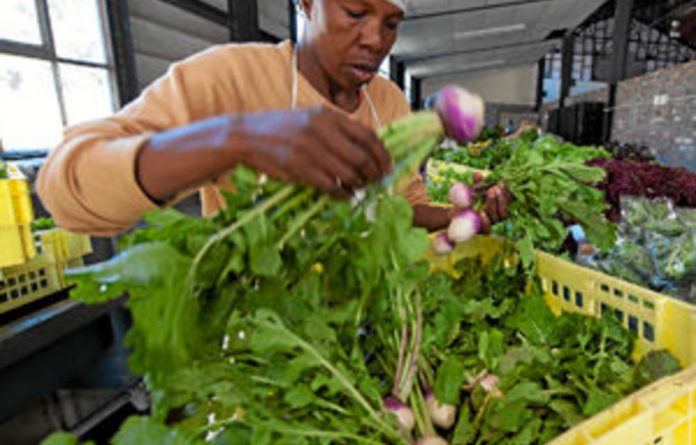 Pockets of food insecurity are plaguing areas in Southern Africa where floods or prolonged mid-season dry spells have reduced harvests.

Communities are battling to access food and desperate families increasingly go hungry, according to a Famine Early Warning Systems Network assessment conducted in July. It points out varying food insecurity levels across the Southern African Development Community region, with higher levels in Lesotho and greater food insecurity anticipated in Namibia — the two countries where the impact of excessive rains and floods on crop production and livelihoods is most severe.

Many would argue it an impossible task; changing the farmer to consumer cycle in such a way that we effectively feed the poor, create employment and reduce our impact on climate change.Yet from within Cape Town’s poorest areas, a farming revolution is underway.

Conditions in these areas remain a concern as harvests have been reduced. The resulting food deficits have had adverse impacts, especially on poor households that, even in average production years, face constraints in accessing adequate food.

Climate change is expected to play havoc with the region’s food security in the future and hamper efforts to achieve one of the key millennium development goals — to “eradicate extreme poverty and hunger” and halve the number of people living on less than $1 a day by 2015.

In a presentation at the African Agriculture Summit in Cape Town earlier this year, William Barclay, senior regional programme adviser for the World Food Programme, said that 65% of the global total increase in climate-related hunger was likely to occur on the African continent. He said rain-fed farming dominated food production across much of the continent, covering about 97% of total crop land.

“There is no doubt that climate change will worsen existing food insecurity,” he said. “Agronomists predict that yields of corn, soya bean, maize, wheat and rice will decrease dramatically as temperatures rise. Models predict that climate change will put South Asia and Africa at great food security risk by 2030, and by 2 100 half of the world’s population could be food insecure.”

The International Food Policy Research Institute says that roughly 65% of sub-Saharan Africa’s population relies on subsistence farming. A typical subsistence farmer in the region is female and uses no fertilisers, high-yield seeds, irrigation or medication for her animals.

At the frontline
In South Africa women are inadvertently at the frontline of climate change effects, both as producers of food and as the people who ensure that families are fed. But according to a study by Yvette Abrahams of the Commission on Gender Equality, women have not benefited from land reform.

Female-headed households make up less than 10% of the beneficiaries of land restitution and less than a quarter of those South Africans who have benefited from land redistribution and tenure reform.

“Failure to redistribute land more equitably leads to simultaneous overuse and underuse of land. Where women farm, they tend to, first and foremost, see to it that their families eat, because of their social role as food providers,” said Abrahams.

“They are also more likely to farm organically and agro-ecologically for the simple reason that they do not have resources to farm any other way. This would be better for climate change because [it would result in] fewer transport miles and soil carbon emissions and reduce the pressure on the commercial sector to provide food for the cities.”

Dorah Marema of Gender and Climate Change Southern Africa (GenderCC) said that in recent years there had been a dearth of extension officers, who advise farmers, in the department of agriculture. This had crippled a lot of small-scale farmers who needed advice about how to deal with changing climate conditions. She hoped their reintroduction would help.

She added that South African policies, in particular the green paper on land reform, appeared to be “gender blind”, not making specific reference to the needs of women.

“Also, the green paper doesn’t make direct reference to climate change and therefore doesn’t address the quality of land that women should access and whether they would be able to use it once they get it and under what conditions.”

“Cape Town is South Africa’s climate change training ground as the weather here has always been extreme. We have 40°C drought with hot gale-force winds in summer, floods in winter and gale-force southeaster winds in-between. On top of this, our micro-farmers successfully grow abundant top-quality organic crops year round in soil that is beach sand.”

Abalimi Bezekhaya estimates that a minimum of 1kg per square metre of carbon is “held” in the life cycle of each square metre of every active micro-farm, which greatly reduces carbon emissions.

“That is a minimum of 100m² per farmer under production by 3 000 farmers, which adds up to 300 tonnes of carbon being ” held” within 2 500 township micro-farms permanently.

“Everything begins and ends with what we eat. When you buy food, you buy the entire chain of events,” said Small. And, he added, buying local and organic helps to mitigate the impact of climate change.

With many parts of Africa still reliant on rain-fed agriculture, access to water will be the major stumbling block to ensuring that farmers stay one step ahead of advancing climate change. Areas affected by floods and long dry spells have been the first to suffer food insecurity.

Also key would be extension and support systems geared towards meeting the needs of small-scale farms because they require different kinds of systems from commercial farms, which are generally prioritised by governments.

This would mean that governments need to be proactive about engaging their subsistence and small-scale farmers in development projects and provide appropriate support for them.