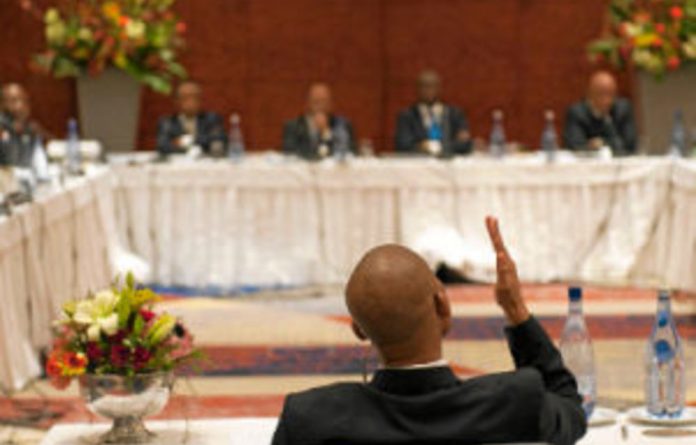 President Jacob Zuma has heaped praise on new Chief Justice Mogoeng Mogoeng for maintaining a “dignified silence” during an onslaught on his fitness to lead South Africa’s highest court.

Addressing a special media briefing in Pretoria on Thursday, Zuma said the manner in which Mogoeng responded to the “spirited public commentary on his candidature” had protected the integrity of the Constitutional Court and the judiciary.

“Chief Justice, you maintain a dignified silence and only responded to the criticism at the correct forum, the JSC [Judicial Service Commission],” said Zuma. “The judiciary should not be part of mud-slinging and other public spats that happen from time to time in society.”

Mogoeng’s appointment comes just days after the JSC grilled him for more than 10 hours over his fitness for the post.

It was the first interview for the position of chief justice to be conducted in public since 1994.

“The interview of Justice Mogoeng was no doubt the longest, most transparent and most robust ever undertaken by a candidate for chief justice or for any other public position in the history of this young democracy,” said Zuma. “It may have even scared many candidates for public office, who feel this may be the next route to follow.”

Zuma’s nomination of Mogoeng was challenged by legal bodies and nongovernmental organisations on the grounds of his lack of experience and conservative views on homosexuality and women. He was also slammed for his ethical conduct after he failed to recuse himself in a case in which his wife acted as a prosecutor.

Confronting a tsunami
Mogoeng thanked Zuma for the trust he had shown in him and vowed to protect the Constitution, “confident that God will help me accomplish this important assignment”.

He said he had had to confront “a tsunami of a special kind”.

First respondents Freedom Under Law argue that the case could blur the constitutionally enshrined separation of powers.

Hlophe has applied to the court for leave to appeal against Supreme Court of Appeal judgments earlier this year that found the JSC had failed to discharge its constitutional duty by not holding a formal inquiry, including cross-examination, in response to a complaint of gross misconduct laid against Hlophe by judges of the Constitutional Court in 2008.

The complaint was prompted by Hlophe’s alleged approach to members of the court in a bid to influence them in a corruption case involving Zuma.

Hlophe retaliated by lodging a counterclaim with the JSC, saying that the manner of the judges’ complaint infringed his rights to dignity and judicial independence.

The appeal court has also found that the JSC was not properly constituted when that decision was taken because Western Cape premier Helen Zille was not present as a member.

In Hlophe’s latest application he submits that, with seven of the Constitutional Court justices directly involved in the case, and Mogoeng involved in more recent attempts to mediate an out-of-court solution to the impasse, Zuma should appoint acting justices to the court to hear his case.

Hlophe contends that section 175 (1) of the Constitution allows the president to appoint acting judges “if there is a vacancy or if a judge is absent”.

He says in court papers that dismissing his application would be unconstitutional as it would directly block his access to the Constitutional Court.

However, Freedom Under Law, which first challenged the JSC’s decision not to investigate the complaints against Hlophe, have responded that if Zuma were to do so it would be “inimical” to the Constitution and “the principle of judicial independence”.

Freedom Under Law argues that such appointments would inevitably create the perception that they were hand-picked, as well as having the “potential of undermining directly and blatantly the separation of powers and allow for executive interference in the decision of the court”.