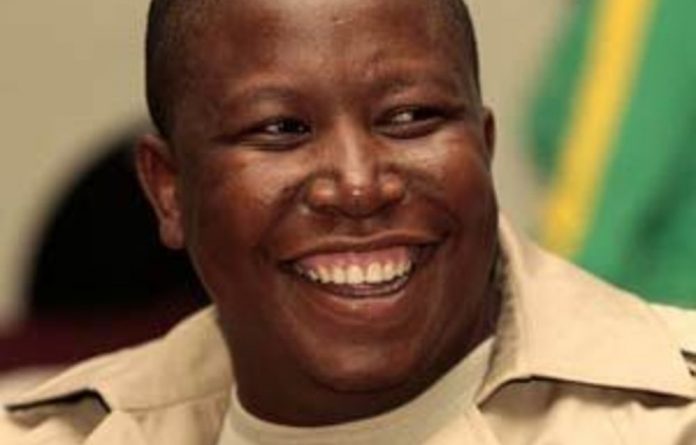 “This is war and we should fight moving forward. There will be casualties but I know that we are going to win,” he said.

“The day has come, and on [Oliver] Tambo’s birthday, we are going to march to the Johannesburg Stock Exchange and take the battle to the monopoly capital,” he said.

He said the league was holding its celebrations in Alexandra because its residents were the most “reliable forces of the revolution”.

“You are the reason the struggle against apartheid continued. The time to fight is now and we will reclaim ourselves in South Africa’s economy.

“If we don’t do it now, those who are unemployed will stay that way forever.”

Unapologetic
Malema said the league would not apologise for its stance on nationalisation, land reform and for the circumstances that led to its leadership facing disciplinary charges.

He recently said the ANCYL would send a team to Botswana to consolidate local opposition parties and help bring about regime change.

This was because the league believed the government there was “in full cooperation with imperialists” and was undermining the “African agenda”.

“The crime we have committed is reminding people about their rights in the Freedom Charter. If I am expelled then I know I will die with my soul intact,” he said.

“They have stolen our land. They are criminals and must be treated like that. We want our land back and we want it for free.

“I don’t need permission to be in the ANC. We are born as ANC. Our blood is always green, black and gold.”

‘For the youth’
Earlier, two cakes were brought into the marquee where the gathering was held.

A one-metre square cake decorated in ANC colours with “Happy 67th Anniversary” written on it was the centrepiece.

The other was a white three-tier cake decorated with pictures of diamonds and gold bearing the words “Economic Freedom in our lifetime”.

The crowd was seated in a sprawling white tent while protest and pop songs blared out of speakers on top of a makeshift stage.

Vendors walked amongst the crowd, selling ice cream to those looking for shelter from the midday heat.

A youth league official asked the crowd to give up some of their seats to a group of elderly women and the crowd shouted back that the meeting was for the youth.

Chairs were eventually brought for the women and they were seated next to a group of children at the foot of the stage. — Sapa