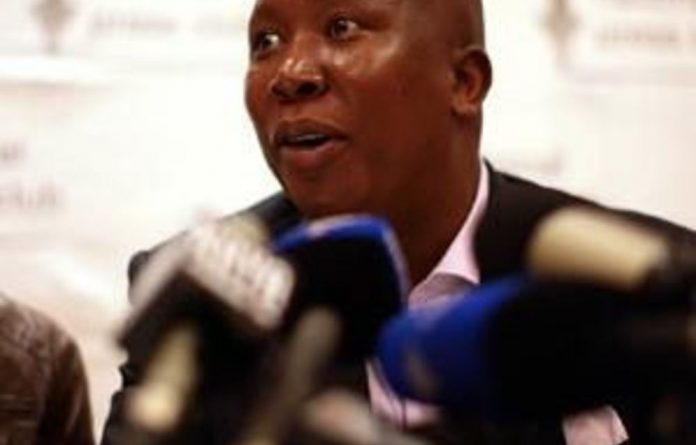 In vowing to overturn the hate speech ruling against him, ANC Youth League leader Julius Malema has slammed the lack of transformation in the judiciary — accusing the courts of double standards in the cases of former Ekurhuleni metro police chief Robert McBride and Bulls rugby player Bees Roux.

The league would appeal against Judge Colin Lamont’s ruling that the song dubul’ ibhunu (“shoot the boer”) is hate speech, Malema and the league’s secretary general, Sindiso Magaqa, said on Wednesday.

The judgment favoured a minority in the country, Magaqa told reporters in Johannesburg.

Magaqa said the ANC Youth League intended taking the matter all the way to the Constitutional Court to have the anti-apartheid song unbanned.

AfriForum Youth laid a civil complaint with the Equality Court against Malema for singing the words, saying they made minorities and farmers feel threatened. Lamont ruled on Monday that the song constituted hate speech.

‘Too generous’
At the briefing, Malema said Lamont had exceeded his mandate. “The judge was generous,” he said. “He gave [AfriForum] what they didn’t even ask for. Nobody asked him to ban the singing of that song.”

Malema, wearing a black beret and an Oliver Tambo T-shirt, went on to reiterate that the song was about the struggle, not the youth leader himself.

‘I didn’t compose it, I have my limitations,” added Malema. “Whether you hate Julius or not — Julius is just an individual.”

“The answer is that such people must pursue new ideals and find a new morality. They must develop new customs and rejoice in a developing society by giving up old practices which are hurtful to members who live in that society with them.”

But Malema challenged Lamont’s assertion, asking why the judge was telling people who struggled against Apartheid how to remember their history.

On Monday Roux, escaped jail time after beating to death a policeman while under the influence of alcohol, by pleading guilty to culpable homicide and paying R750 000 to his victim’s family as restitution.

‘Lacking democratic values’
“The courts … they lack the values of a democratic society,” he said. “Robert Mcbride, who is hated by whites, smashed his car and gets a prison sentence but Roux killed a man and gets a fine,” said Malema.

He said Lamont’s judgement showed ‘Apartheid was being brought through the backdoor and the door must be closed”.

He said civil rights group Afriforum had too much power and the league were ‘being subjected to white minority approval”.

Media culpability
Malema also addressed Lamont’s assertion that while the song might have previously been a legitimate struggle song, it had been transformed into hate speech by the way Malema’s singing of it was depicted by the media.

“Perhaps media must be restricted from ANC Youth League briefings,” Malema said. “They use your reporting to stop us from being who we are.”

“If a person who is not at a rally interprets song to be genocide, then maybe we must get rid of middle man. Nobody elected newspapers.”

Marching to court
He reiterated that the youth league would lead the charge to appeal the ruling.

“We will ask people to march to the Constitutional Court and appeal the judgment,” said Malema.

“We are going to the Supreme Court of Appeal. And the Constitutional Court. And we will ask Parliament to provide laws that protect our struggle songs.” — Additional reporting by Katharine Child