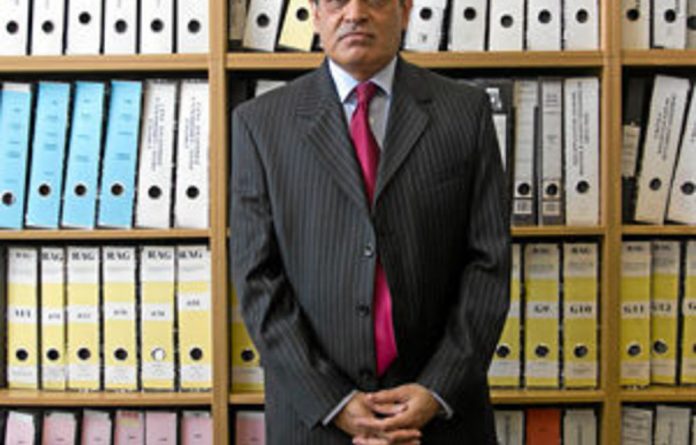 Disgraced former liquidator Enver Motala has submitted a review application to the master of the high court in Pretoria denying allegations that he is a convicted fraudster and asking to be reappointed as a liquidator for Pamodzi Gold.

A lightning rod for controversy, Motala was removed from the liquidators’ panel last week after reports reached the master that he had been convicted on 93 counts of fraud and one of theft.

In an exclusive interview this week Motala hotly denied the allegations, which industry sources say emanated from the other joint provisional liquidators of Pamodzi Gold, which was run by Aurora Empowerment Systems between October 2009 and August this year.

He also said that he should “get a medal” for infusing R3-million in the faltering Aurora and denied allegations that he had done so without informing his fellow liquidators. He called them “liars”, prompting a counterblast from another Pamodzi liquidator that he is talking “rubbish”.

The report on which the master acted in sacking Motala says that he changed his surname from Dawood to Motala in 1985 to conceal his fraud convictions.

But in his Rosebank, Johannesburg, office, seated at a large oak table, Motala insisted that he was hard done by and misunderstood.

‘Made up’
On a couch against the wall lie large, newly framed Arabic prayers, still in bubble wrap. Official photographs of former presidents Nelson Mandela and Thabo Mbeki are flanked by a larger, unofficial portrait of a laughing Jacob Zuma.

He claimed that the 93 counts of fraud and one count of theft were all “made up”.

“I don’t know where they get this,” he said. “I was convicted on one count of fraud for R1 024.” He pointed out that the conviction dated back to 1978 and would soon be expunged.

“They said they are disqualifying me as a liquidator because I’m not talking frankly about what happened in ’78. But I can’t talk about it.”

Motala was also unabashed about lending Aurora R3-million last year. “Aurora was being crucified in the press for not paying its workers,” he said. “The directors asked the liquidators openly if we would help them out.

“We thought it was a joke at first. I said I’d lend them money in sympathy with the unions. I can do what I want with my money. I should be given a medal for giving Aurora that loan from my own company. And the liquidators are lying if they say they didn’t know.”

But another of the joint liquidators, Johan Engelbrecht, claimed that he had no knowledge of the loan. “[Motala’s] talking rubbish,” he said. “All the liquidators confirmed in writing to the master that none of us knew of his loan to Aurora.”

The master also criticised Motala for extending Aurora’s control of the mines in spite of it having failed in its responsibility for care and maintenance.

Motala attributed his name change from Dawood to Motala to a mistake on his identity document, which he later rectified.

He said he had worked with the ANC since the 1970s and had been a member of the party’s economic policy committee. But he said: “I don’t have any political connections. I just grew up in front of them: Trevor Manuel, [Penuell] Maduna, all these people in high places today. I come from a politically charged family.”

Motala continues to present himself as a champion of the unions, in spite of the fact that Cosatu and the National Union of Mineworkers have called for his head because Aurora did not pay workers’ wages and allegedly stripped assets from the Pamodzi mines.

He showed the Mail & Guardian a certificate of appreciation awarded to him by the NUM last year.

His name first hit the headlines in 2003 amid claims that he had a close relationship with former justice minister Maduna. Maduna allegedly appointed a new master that year, so that he could, in turn, appoint Motala a liquidator.

In 2004, Motala was arrested by the serious economic offences unit for fraud and corruption, after allegedly paying for information about companies declaring insolvency. At the time, he was investigating irregularities in the liquidation industry as Maduna’s appointee. The charges were later dropped.

“I’m not fazed by all of this,” said Motala.

“I admit I have a hidden past, but it’s not what you think. It will all come out soon and I will have the last word.”