Hundreds lash out at secrecy Bill 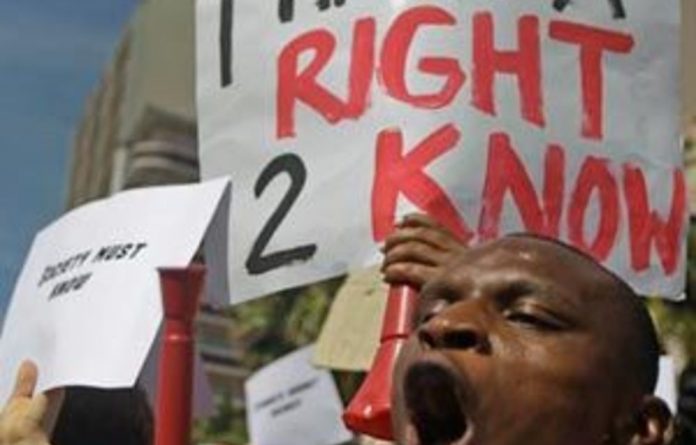 South African politicians on Saturday joined hundreds of people who marched outside Parliament to protest against the controversial secrecy Bill which will be tabled in Parliament next week.

The African National Congress used its majority to push through the Protection of Information Bill which proposes penalties for disclosure and possession of material classified secret.

The Right2Know campaign marched with hundreds of supporters to Parliament to protest against the implementation of the controversial ‘secrecy’ Bill, ahead of a planned debate this week. ANC secretary general Gwede Mantashe has subsequently signaled it may be shelved.

Kasrils said the legislation was wrong.

Standing on the flatbed of a truck parked outside Parliament’s main gates, Kasrils — who wore a pink shirt and a straw hat — said it was essential people raised their voice against the Bill.

“I have been asked by journalists why I, as a former minister, and a member of the [ANC] and the South African Communist Party [SACP], am at this march.

“The answer … is very simple. When your mother or father, brother or sister, your family, is doing the wrong thing … you raise your voice and say, ‘That is wrong, it must not be done!'”.

Kasrils said his love for his country “transcends the love of my party”.

Self-interest
On media freedom, he suggested government was pushing through the Bill to spare itself embarrassment.

“This all-embracing Secrecy Bill … we smell and suspect is not about the real secrets that must be defended but it’s to prevent those silly leaders who have egg on their face, who have been exposed by the media for doing foolish and embarrassing things.”

Among such things, he said, were “misusing and abusing” tenders and contracts as well as taxpayers’ money.

Saturday’s march — which proceeded from Keizersgracht along Darling, Buitenkant and Roeland streets to Parliament — was organised by Right2Know (R2K), a grouping of 400 civil society organisations that began fighting the controversial bill a year ago.

‘The trust will keep us free’
The marchers were preceded by a group carrying a long white banner proclaiming “we have the right to know” and the image of a vuvuzela with a knot tied in the stem.

“Jou Ma se Secrecy Bill” read one poster. “The Truth will keep us Free,” read another.

The final draft of the Bill is set to go before the National Assembly on Tuesday. It will then have to go to the National Council of Provinces (NCOP) for concurrence, before being signed into law by President Jacob Zuma.

Those opposed to the measure say it seriously erodes the public’s right to know and poses a threat to the freedom of the country’s press.

‘Grave’ concern
According to an editorial in the Cape Times on Friday, the Bill “fails the media freedom test” because — in its current form — anyone who had documents that had been classified state secret would be liable for criminal prosecution.

“And it fails because even if you have a compelling argument for publishing the contents of such documents, you will not have the right to argue that it was in the public interest.”

In a statement issued on Friday evening, after its annual general meeting in Cape Town, the South African National Editors’ Forum (Sanef) said the information bill was of “grave” concern.

“[Its] lack of any public interest defence, draconian sentencing regime, broadness of application and excessive shielding from scrutiny of the intelligence services are of grave concern.”

Sanef said it would continue to oppose the Bill being enacted “and will take legal action if necessary”.

Speaking to Sapa on Saturday, Kasrils said the passing of the Bill would be a sad day for the country.

“It will be a very sad day to see the rights of the people stifled.”

‘Making a mistake’
Addressing the crowd, Achmat said if the Bill was passed without a public interest defence clause, “we will be making a mistake”.

Speaking at the start of the march, Shapiro told protesters the R2K campaign would oppose the Bill’s passage.

“We will not let the Bill go through the way it is now,” he vowed.

Among the posters held aloft outside Parliament was one showing three chimpanzees, using their hands to cover, each in turn, their mouth, eyes and ears. It read, “We’re taxpaying citizens — not your dumb pets”.

On the back of the speakers’ truck, a woman in a red T-shirt and wearing a white doek on her head held up a poster advising government: “Keep the bill in your pants”. — Sapa