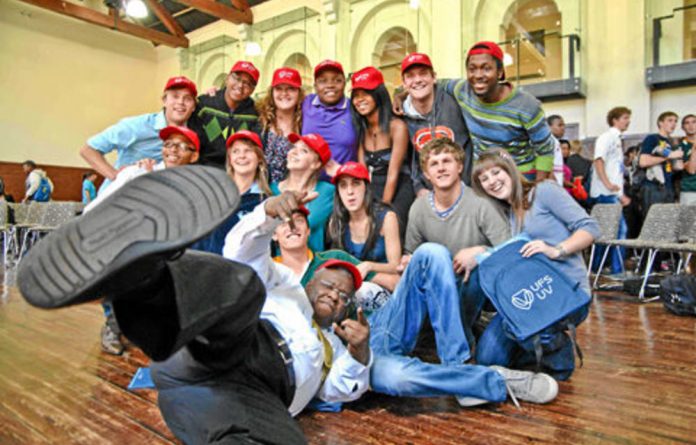 “Do not come back alone. Do not come back the same,” was Professor Jonathan Jansen’s advice to a group of almost 150 University of the Free State students, who are about to embark on overseas trips to learn about transformation, leadership and diversity.

“Come back with friends, bring students back here. We would have wasted a whole lot of money if you leave with prejudice and come back with prejudice. Come back as a different set of people,” Jansen, vice-chancellor of the university, said at the send-off event for the students held last Friday.

On the back of the notorious Reitz residence video more than two years ago, the university introduced a new initiative last year, the Leadership for Change programme. In the first stage of the programme, first-year students from all the university’s campuses are chosen to visit selected universities in the United States, Europe and Japan.

Groups of between six and 12 students, comprising a mix of races, genders and study fields, participate in the programmes, which are designed by their host institutions to expose them to “different cultures, lifestyles and beliefs”, said Aldo Stroebel, director of international academic programmes at the university.

The second stage of the Leadership for Change kicks in next year, when the students will mentor first-year students, develop leadership programmes for them and run volunteer programmes in residences and on campus.

Addressing them, Jansen said he would not be surprised if the next ANC Youth League president came from this group of students. “That’s a joke,” he said. “I’m sure you have higher ambitions.

“I will not be surprised if one of you invents the vaccine for HIV, or if one of you is the next International Monetary Fund leader, or a representative for the United Nations — because you have the right combination of [being] academically smart and having leadership instincts,” Jansen said.

He challenged students to “get lost” at some point in their trip: “Go out at 2am, put one of the hotel cards in your pocket. Go and eat at the McDonald’s in Times Square. Meet weird people. Speak to boemelaars [tramps]. Then go back to the hotel at 5am. Try to run away at least once.”

Transformation at the university entailed staff and students “having a broader perspective”, said BComm student Tshepo Moloi. He hoped what he learned from overseas universities would help him influence this process of change.

Charné Viljoen, a first-year law student, said she wanted to be a better leader and would use the opportunity presented by the programme to “unite students”.

This time last year the Mail & Guardian spoke to the programme’s inaugural group of students before and after they flew to the US. While abroad, several students contributed to the “UFS Diaries” carried on M&G Online.

Eyes have been opened
The M&G caught up with some of the students last week. All agreed that their “amazing experiences” had opened their eyes to diverse campus lifestyles.

Nandi Bester, now in the second year of her BA in governance and political transformation, said she asked herself on her return to South Africa last year: “How are you going to put back into the university what it has put into these students?”

She realised that the programme would cause a ripple effect at the university’s campuses because students “will speak positively — their comments are powerful”. Since her return, she and other students who were part of the programme had organised projects such as a national student summit during which students discussed common problems on their campuses, a cancer awareness rally, and a book club for poetry. Money was raised “to improve education in Africa”.

She said the US embassy had “noticed” her when she first went for her visa interview for the trip and had followed her progress at university. As a result she was invited to be one of 75 women who met Michelle Obama privately during her recent trip to South Africa.

Sibusiso Tshabalala, a second-year BComm student, said he had wanted to be part of the programme because it was “creating a new, fresh generation of leaders, encouraging people to think differently, and the ripple effect is huge”.

Setting a precedent
He described the Reitz video as a “chance to be brutally honest with ourselves”. He said: “We are proud of the lessons we learned from the video; it challenged our belief systems. It brought us together. The university had had transformation policies for years. They didn’t come alive. The way the university dealt with the video set a different precedent.”

William Clayton, a second-year student of governance and political transformation, said differences between the university’s students “are slowly fading out”.

“It’s not bitterness, it’s a discussion. We must know that we can still dis-agree on things but we are still a collective. We are Kovsies,” Clayton said.

The students spoke about the recent Student Representative Council elections, in which, for the first time, candidates could not represent political organisations.

The eight students interviewed agreed that the best students were elected for the job. At the announcement of the election results “everyone cheered and clapped, we chose students, not political parties, and it was amazing that students voted across racial boundaries”, Clayton said.

During their stay in the US the students will share their impressions of their host universities and the places they visit. Their diaries will go live on M&G Education Online over the next three weeks. Victoria John will accompany the students to the US as a guest of the university.