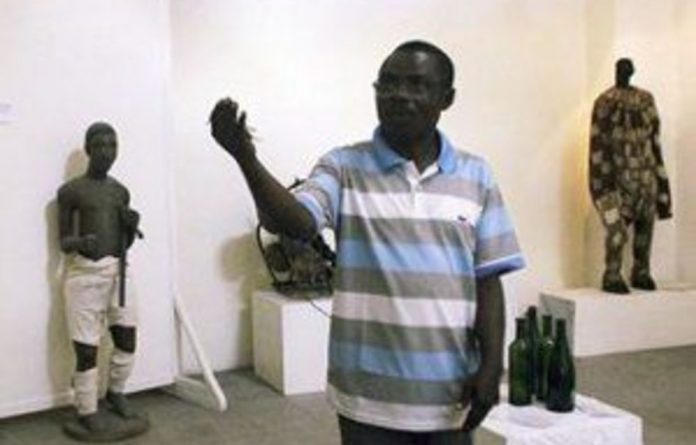 Five months later, the museum’s gates still open and close at the posted hours, but empty display cases gather dust. A lone set of elephant tusks sits in the dark in the museum’s main exposition room.

And staff member Oumar Gbane now spends his days making a handwritten inventory of what was stolen since his computer was among the items taken.

“No tourists can come here. There is nothing to see,” he laments. The pillage was the first in the museum’s 70-year history.

Doran Ross, former director of the Fowler Museum in Los Angeles, says the Abidjan museum used to be “one of the best maintained in Africa”.

Student groups and tourists once filled the museum’s halls to view the corpse-like Senoufo statues depicting armless ghosts of ancestors and the dark wooden Baoule masks with elongated eyes and narrow mouths.

They saw delicate Akan pendants abstractly depicting animals in shiny gold, sacred Yohoure masks of antelopes with a human faces, and Baoule chest ornaments made of beads and golden disks etched with images of fish and crocodiles.

Ivorian artist and author Veronique Tadjo, who resides in South Africa, says the collection reflected “the various areas [of the country] that now need to reconcile”.

“Young people will be deprived of these treasures that are part of our identity — what makes us proud, what makes us a nation,” Tadjo says.

Museum director Silvie Memel Kassi says the thieves knew which pieces to take: The 17th century gold was stolen but less valuable pieces were not even touched.

In normal times, the museum property seems cut off from the billowing exhaust fumes and endless blocks of high rises outside. Stepping inside the museum walls, one enters a verdant place where tropical hardwoods, palm and banana trees flourish undisturbed.

Home to snipers
During the violence, snipers made the property their own sanctuary, using the rooftop of the museum to stage attacks. Many of the bullet-shattered windows in towers across the street have not been replaced yet. When it rains, water leaks through bullet holes in the building’s rusted metal roof.

In November, former president Laurent Gbagbo refused to leave office following a contested election, and five months later the country was on the brink of civil war. Members of the military, militia men and residents picked up arms in Abidjan.

On March 30, the ongoing violence that followed the election intensified around the museum, Gbane says. Museum workers went home not knowing they wouldn’t return for weeks. Like most residents of the city, they locked themselves inside their homes, unable to leave except for perilous trips to find food.

No one was there to guard the museum. It was not a safe place to be, situated between the military headquarters and government buildings.

When Gbane returned on April 18, he found the thick cement walls were punctured on the front of the building and there was a pile of rubble on the museum’s entrance.

After the looting Kassi contacted Interpol, and Ivorian customs officials have been ordered to watch for the plundered objects, Kassi says. But Côte d’Ivoire’s borders are porous and the pieces could be easily smuggled into neighbouring countries without detection.

Museum pillages have been a byproduct of war for centuries. In 2003, looters in Iraq plundered 15 000 priceless artifacts that dated from the Stone Age and Babylon to the Assyrians. Afghanistan’s museums have been systematically stripped of ancient artifacts for decades.

Often stolen art is only discovered when the thieves try to sell the pieces to museums or art collectors, says Ross, the art historian.

One danger is the gold could be melted down and disguised. Kassi thinks the thieves are too smart to do such a thing. “It doesn’t have the same value. They know,” she says.

Ross says the gold itself has low karat values and would not even be worth much melted down.

“The real value of the work is the artistic quality,” he says. “This is a major loss, not just for Ivory Coast or Africa but for a much larger world,” says Ross. – Sapa-AP