Amanda Knox is a saint AND a diabolical she-devil, says lawyer 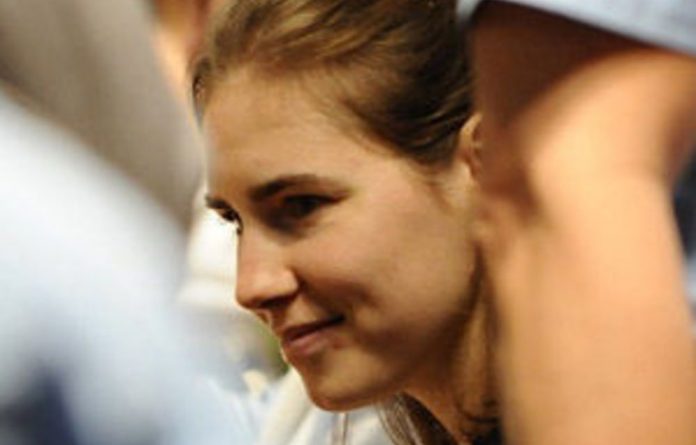 Amanda Knox is at heart a “she-devil” who loved to play dangerous games, the lawyer for a man falsely accused by the American student of killing her roommate told an Italian court on Monday.

“Amanda is one thing and another — that is, both Saint Maria Goretti and a satanic, diabolic she-devil given to borderline behaviour,” Carlo Pacelli said, referring to a Catholic saint linked to purity, young women and rape victims.

Knox and her Italian ex-boyfriend Raffaele Sollecito are appealing their 2009 convictions for the murder of 21-year-old Briton Meredith Kercher during a drug-fuelled sexual assault in Perugia in 2007.

The student from Seattle initially accused Congolese bar owner Patrick Lumumba of killing Kercher, whose half-naked body was found with a deep stab wound in the throat.

Witches and water
Knox looked gaunt and tense as Lumumba’s lawyer Pacelli branded her a “witch of deception” whose lying ways belied her fresh-faced “soap and water” looks.

Knox, 24, later retracted the accusation against Lumumba, saying she incriminated him under pressure from police who threatened her with 30 years in jail. Briefly arrested, Lumumba was cleared and successfully sued the American for slander.

Pacelli told the appeals court that Knox’s lies destroyed his client’s image in an instant, making him a “second victim” in the case. He argued the American was a liar who led a life that revolved around easy sex, drugs and booze.

“Amanda should be judged based on her personality when the crime occurred in November 2007 and at that time she was a concentrated mix of sex, drugs and alcohol,” Pacelli said.

“We’re not talking about the girl you’re seeing today, who has been through four years of prison.”

“Amanda Knox loved strong emotions and dangerous games,” Pacelli said. “If she had no reason to lie, why did she lie?”

Knox’s father said afterwards that the accusations levelled by Pacelli at his daughter had been tough for her to hear.

“Whenever your daughter gets called a she-devil or Lucifer, that’s over the top,” Curt Knox said. “He has no idea who she is — he’s never met her, he’s never talked to her and to be pulling those kinds of names out is just inappropriate.”

Outside the courthours, Lumumba told Reuters he was still haunted by the false accusation of murder.

“I hope things change with time, but for now, I still keep checking my door at night to see if it is locked. It’s when you get the sensation that someone wants to hurt you,” he said.

Knox was sentenced to 26 years in prison and Sollecito to 25 years. Prosecutors on Saturday asked the court to increase both terms to life.

‘Foxy Knoxy’
The American’s good looks and conflicting portrayals of her personality helped fuel worldwide interest in the case which has spawned more than a dozen books and a television movie.

Dubbed “Foxy Knoxy” by some in the press, the former University of Washington student has been cast by prosecutors as a cunning young woman with a penchant for extreme sex games, and by her supporters as a naive victim of bumbling Italian police and unreliable forensic evidence.

Many Americans regard her as an innocent student abroad who got trapped in a byzantine legal system thousands of miles from home.

A lawyer for Kercher’s family, Francesco Maresca, defended the prosecution’s case in court and made a plea to jurors not to be swayed by incessant media coverage of the case.

Juxtaposing a picture of a smiling Kercher with photos of her bloodied corpse to remind the court of the gruesome nature of the crime, he likened Kercher’s murder to a mafia killing.

He pointed to her slashed throat, more than 40 wounds on her body and lack of any signs of struggle, which suggested her hands and legs had been held down by her murderers.

“I’m showing these photos to make you understand how this girl suffered,” he said, calling Kercher “beautiful” and “full of life” before her slaying. “She met her death inside her own bedroom, where you think you are most safe.”

‘Sexual assault’
Prosecutors say Knox led her boyfriend and a small-time drug dealer, Rudy Guede, in a sexual assault on Kercher that ended with the American stabbing her roommate with a kitchen knife.

Guede, an Ivorian drifter with a criminal record, was jailed in 2008 for taking part in the murder.

He also says he is innocent.

Knox maintains she spent the night of the murder with Sollecito in his apartment where they watched a film, smoked marijuana and had sex.

She has won support from many in the United States, where her family has helped keep attention on her case by appearing regularly on talk shows and news programs. — Reuters