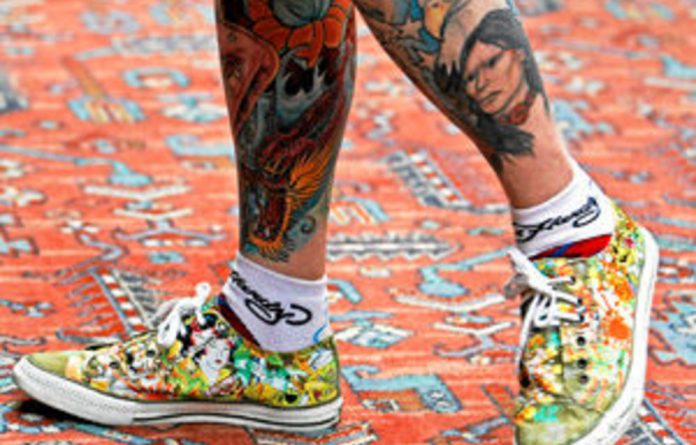 A blue and red flowering, sinuous, inky design written permanently into the skin of bare legs may be eye-catching — but is it art?

Amy Savage thinks so. She explains how she got the tattoos on the backs of her legs from Xam, a noted tattoo artist who works at London’s Exmouth Market. She and companion Eddie Boxell, who has equally rich and beautiful tattoos covering most of his left arm, “collect” their tattoos from noted practitioners:

“It’s an art thing, a collecting thing,” says Boxell.
They are early arrivals among the 20?000 or more visitors who were expected to attend last weekend’s International London Tattoo Convention at Tobacco Dock in Wapping. The expansive halls of this converted warehouse had become a fantasy realm of tattoo parlours, tattoo museums and supply stores, with alternative fashion boutiques, a rockabilly club and performance stages to entertain the decorated multitudes when they tired of photographing and praising one another’s illuminated flesh.

It is a skin thing, you notice, as more and more people with ever-more impressive markings flow into Tobacco Dock. You find yourself ignoring clothes and looking at an inky foot, a spider-web neck, a dragon shoulder.

The decorations shine up skin, make it different and mysterious. They lead your eyes and hold your gaze. A Japanese geisha portrayed on someone’s arm; a woman going by with elegant tattoos all over her arms and on her legs, under her tights.

They are participants in a cultural wave as huge as the Pacific surf, the islands from which the word “tattoo” originated. Chiara and Fabio are part of the same movement or fashion or compulsion: they have come from Italy especially for the convention, parading faces completely covered in phantasmagoric designs finished off with piercings. At its extreme, tattooing might seem a radical subculture that defines your whole existence, but the growing popularity of tattooing belies any such assumption.

An ancient art
Chances are that you, a family member or a friend has tattoos. Once associated with sailors, gang members or circus performers, these markings are now a mainstream cultural force. If you don’t have tattoos close to home, you surely see plenty of people around who sport the kinds of spectacular, high-quality inkings that are walking around this convention floor.

But is it art, as visitors to the London convention claim? The answer is a flaming dragon of a yes.

Not only is this an art, it is one of humanity’s most ancient arts. The once salty docksides of Wapping provide a historically resonant place to stage this festival, for it was sailors who were known for their tattoos in the 18th and 19th centuries.

The European “discovery” of tattooing dates from Captain Cook’s exploration of the Pacific in the 18th century. Cook took artists and scientists on his voyages, and on the islands in the Pacific they encountered peoples for whom it was habitual and ritualistically important to decorate the body using a bone needle to force natural dye deep into the skin.

Modern tattooing, which is being done all around me at the convention by parlours offering state-of-the-art markings, is just a more hygienic (hopefully) and technological version of this ancient method. Tattooing flourished in the inhabited Pacific islands, yet each practised a different style: Maoris combined tattooing with facial scarification, Marquesas islanders wore full-body tattoos, Samoans preferred them on buttocks and thighs. The word for this art was “tatau”.

Mainstream markings
For the first European visitors, these islands, above all Tahiti, seemed paradisiacal dreamlands of free love and unashamed physical beauty. In 1789 the crew of the Royal Navy ship HMS Bounty, seduced by the alternative society they saw among the islanders of the South Seas, mutinied against the formidable Captain Bligh. As an expression of their radical choice to stay in the Pacific and reject their Britishness, they got tattoos. Since then, tattooing has become a nautical stereotype, then the stuff of 1950s fairground subculture, and now a mainstream body art celebrated in picture books and at conventions.

In fact, the historical curiosity of today’s tattoo enthusiasts leads them to look far earlier than the Pacific encounters of Cook and Bligh. At the convention, Japanese tattooing is on offer — the origins of tattooing in Japan go back into prehistory. At a tattoo museum tucked in among the stalls, it is stressed that some form of tattooing is universal among ancient peoples, including the blue woad-covered Britons described by ancient Roman historians. It was also customary in Rome to tattoo slaves.

Is the rise of tattoo, then, a return to our roots, a modern tribalism? The trouble with such catch-all theories is the self-consciousness of tattoo enthusiasts about their art. There are “tribal” tattooists here, but that is just one genre. Savage, for instance, says she tattoos in a “neo-traditional” style, specialising in figures such as Gypsies that she renders in a convincing, precise manner.

Rites of passage
There’s the pain. And the more extensive, rich, careful and beautiful the work of art that is pounded by a needle into your body, the longer you have to endure that pain. That makes tattooing a rite of passage: and so it was among the Polynesians before Christian missionaries discouraged them from marking their flesh.

In the Pacific, anthropologists have associated tattoos with a fragmented conception of identity, a belief that a person is not one but many things. Putting on the shining painted skin of a warrior changes your nature.

Are people now seeking to change their natures, to become fabulous new beings? Perhaps there is something digital and post-human about it all, a new sense of self that is no longer bounded by being inside your own skin, but penetrated — as by a needle — by social media and constant internet information, so you feel part of a larger entity, that imprints itself on your body. —

Slice of Life: When ink is more than skin deep

No sex in this city: the bare-faced cheek of Paris’s most sensual museum

Should artworks with offensive names get an update?

Can tattoos stand test of time?