The puzzle that is Michael Sata 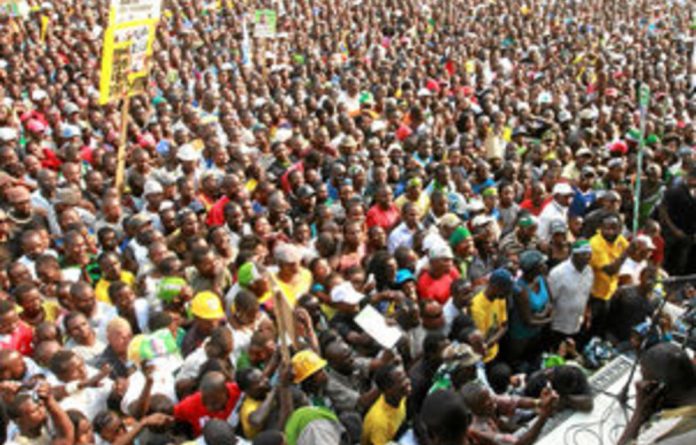 He is definitely no charmer and apparently no fan of the media. When the new Zambian president, Michael Sata, was asked to clarify his response to emerging allegations of vote-rigging he snapped: “Why don’t you understand? You’re supposed to speak English better than me!”

I then felt a tug on my arm from one of his suited aides, who gave me a threatening glare through dark glasses. “Stand back,” he ordered.

Sata enjoys making journalists chase him — because he likes to feel in demand, Zambians say. On voting day last week, assembled hacks were tripping over flower beds and camera cables in pursuit of him through the grounds of a Lusaka school.

When I suggested that we should all stop moving, I was again tapped by the aide. I fell back, my interview opportunity over.

In Britain media houses were delighting in the fact that he had once been a cleaner for British Rail (he was actually a train driver) and that this humble figure had now been elevated to head of state.

In Zambia itself the response to his win — which followed two tense days and riots in Copperbelt province that claimed three lives — was euphoric. But amid the gushing tributes about the maturity of Zambian democracy, which resulted in Rupiah Banda’s Movement for Multiparty Democracy (MMD) exiting gracefully after two decades in power, worrying questions remain about Sata and the meaning of his rise to power for Zambia and the region.

At 74 he is no newcomer to Zambian politics, having served as a governor of Lusaka in Kenneth Kaunda’s government when Zambia was a one-party state, and as health and local government minister for the MMD. In 2001, after being overlooked by the party as presidential candidate and falling out with former head of state Frederick Chiluba, Sata broke away to form the Patriotic Front. With him went his current deputy, former MMD agriculture minister Guy Scott.

Finally made it
Ten years in opposition later and on his fourth attempt he has finally made it to State House, breaking the MMD’s 20-year monopoly on power.

Sata has a reputation for being a man of action who gets things done. He was a popular health minister, credited with improving working conditions for Zambia’s doctors and nurses, and won similar respect while governor of Lusaka.

But former colleagues say he is often outspoken and can be aggressive and abrasive, ruling his party with an iron fist. This is in stark contrast to the soft manner of his predecessor, Banda, who entered government through the diplomatic service. But that is part of Sata’s appeal, particularly to Zambia’s marginalised and unemployed youth.

He has publicly voiced support for Robert Mugabe and suggested that Mugabe’s critics are “imperialists”. In a previous election campaign he attacked Chinese economic interests in Zambia, although such rhetoric was much less in evidence on this occasion. Some fear that he is little more than a populist striking radical poses to win the support of Zambia’s impoverished underclass, which was untouched by the economic achievements of Banda’s government.

“I don’t doubt he said those things in the past,” said Kenneth Mubu, the Zambian-born spokesperson on international affairs for South Africa’s official opposition, the Democratic Alliance, who was in Zambia for the elections as an observer with the Southern African Development Community (SADC).

“But people change when they come into power. Seeing that he won in such a democratic way, the hope is that he will not support other ­undemocratic regimes.”

Mubu said it would be interesting to see what position Sata will take on regional leaders such as Mugabe, King Mswati III of Swaziland and Malawi’s Bingu wa Mutharika.

Kondwani Chirambo, the Institute for Democracy in Africa’s Zambian-born programme director, agreed that Sata was likely to tone down radical policy views and fall into line with other regional powers.

“He is likely to be outspoken — that is his character — but he’s also a very shrewd politician. I think he’ll be careful not to plunge carelessly into a pro-Mugabe position,” Chirambo said. “I definitely think he’ll be vocal, but I don’t think he’ll allow himself to get into a position where he’s seen as a pariah in the region.”

Foreign policy agenda
Chirambo said Zambia’s relationship with China — one of its main trading partners and a huge source of foreign direct investment — was likely to be more central to Sata’s foreign policy agenda than his views about Zimbabwe.

“Labour rights and domestic issues were so central to how he got elected and that’s why I think how he handles China and local concerns will be far more important to him than Mugabe. There’s so much Chinese investment in Zambia; it’s unthinkable that any government would go against them or target them. I think he has been, to some extent, misquoted on this.

“But there are also a lot of voters with high expectations and strong views about the Chinese, so I think he’ll look at labour legislation and its implementation and approach the Chinese issue that way.”

Speaking during the swearing-in ceremony on the steps of Lusaka’s Supreme Court last Friday, Sata said he supported foreign investment but urged companies to respect labour laws. In what some saw as a veiled message to China, he also talked about “fair” partnerships.

Beijing policy chiefs have publicly welcomed his appointment, saying they are keen to “push forward co-operation [and] bring more tangible benefits for the two peoples”.

China’s ambassador to Zambia, Zhou Yuxiao, had a private audience with Sata just three days after his inauguration.

International mining companies and traders with significant interests in Zambia have also expressed concerns about possible changes in mining taxation under Sata, whose party campaigned on a ticket of sharing the country’s mineral wealth more evenly and reducing inequalities.

Last week the Zambian kwacha plunged to a 12-month low against the dollar, reflecting investor nervousness and uncertainty after several years of highly favourable investment conditions under Banda’s MMD.

Shefali Rai, an Africa analyst at the Economist Intelligence Unit in London, said there were still question marks over Sata’s mining and taxation policies. “One important reason why Sata won the election was that he capitalised on the widely held perception that Zambia’s mineral wealth has largely benefited foreign investors and the political elite. And he will face pressure from his supporters to change the status quo.”

But Rai said drastic policy changes were unlikely. The mining sector was likely to be better regulated and possibly more heavily taxed, she said.

The region wonders how Sata will fit into the complex SADC jigsaw puzzle; Zambian voters are watching to see which domestic policy changes he introduces. He has boasted that he will bring significant change to the country within 90 days.

So far, change has come only at the symbolic level. Sata has, for example, renamed the country’s airports after liberation heroes — Lusaka International Airport is now Kenneth Kaunda Airport.

There is also considerable speculation in Zambia about how long he may have to implement his reform agenda. He is understood to be a heavy smoker and many say he is not in good health.

With a booming economy, a vibrant political scene and corruption on the boil, we examine Zambia in the run-up to their national elections in September. For news and multimedia on the elections view our special report.