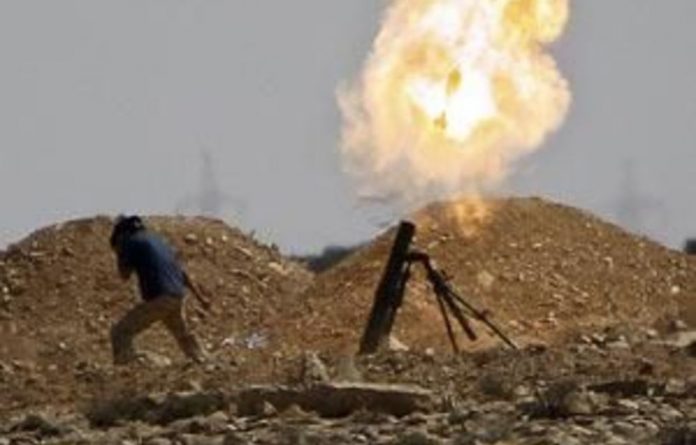 A rocket killed two children on Saturday as their family joined the quickening exodus of civilians during a two-day window to flee the battle for Muammar Gaddafi’s hometown of Sirte, a Libyan medic said.

Some of the hundreds of people escaping the city said there had been civilian casualties when residential buildings were hit, either by artillery fire from besieging new regime forces or by Nato air strikes.

A large force of some 100 vehicles, including anti-tank guns and multiple missile launchers, entered the city from the south at around midday and surrounded the compound.

“We are surrounding the Ouagadougou Centre,” fighter Osama Blao told Agence France-Presse as he returned from the frontline.

Several NTC fighters said the Red Crescent had asked them to stop firing because Red Cross officials were inspecting a hospital close to the centre.

Some of the fighters pulled back after two hours of intense clashes during which loyalist forces used snipers and mortar fire.

The coast road west to Libya’s third-largest city of Misrata was clogged with convoys of fleeing civilians, an AFP correspondent reported.

‘Torn to pieces’
The two children killed “were torn to pieces,” said Ahmed Abu Aud, a field medic on the western side of Sirte. “They collected the body parts in bags.”

NTC chief Mustafa Abdel Jalil said that civilians were being given a chance to leave Sirte.

“A chance of two days has been given by the revolutionaries near Sirte so that civilians can leave the city … It started yesterday [Friday],” he told a news conference in Benghazi.

Abdel Jalil gave no indication that this was in any way an ultimatum or that a major assault would follow the end of that period.

Abdel Jalil claimed the battles for Sirte and the other remaining stronghold of Gaddafi support — the desert town of Bani Walid — were going well.

Among those fleeing was Redwan Abdulrahim, whose small truck was piled high with suitcases and other possessions, said the situation in Sirte was increasingly difficult.

“It was really bad. We didn’t know where the bullets and rockets were coming from,” he said.

Hassan Duha, a commander in the Misrata military council operations room, said a growing number of Gaddafi troops were trying to hide among the escaping civilians.

“They throw away their IDs and they try to come out with the families,” he said.

Not involved
An AFP correspondent saw one Gaddafi officer surrendering on Saturday.

Major Mohammed Usba Hanish told his NTC captors that although he came from Gaddafi’s birth place in the small town of Qasr Abu Hadi, 20km south of Sirte, he had not been fighting as he was on sick leave.

“I am not involved. If I was involved, I would not be here,” he said.

Hanish said that troops still loyal to the toppled dictator were facing growing shortages. “The Gaddafi people are eating just bread. They are running out of food and ammunition.”

At midday, NTC forces opened an artillery barrage from the east on administrative buildings in the city centre.

“We are targeting buildings where Gaddafi’s men are holed up. Our scouting teams have informed us that a lot of mercenaries are still in there and we are striking them too,” said Colonel Hussein Idris as he supervised the barrage.

An AFP correspondent saw young NTC fighters open up with six Russian-built 130mm cannons in the desert, firing dozens of shells in an hour.

Civilians killed
Dozens of Pakistani migrant workers were among the hundreds of Sirte residents fleeing to the east.

“Nato struck one big building, Imarat Tamim, two days ago, with 12 or 13 bombs,” said Ashiq Hussein, who fled the city with 11 family members, including six children.

“The whole building with nearly 600 flats is razed to the ground now.”

Hussein, an electrician originally from Lahore, worked in construction with a Libyan builder and has been in Sirte for 30 years.

“Two of my neighbours died yesterday in a Nato bomb which hit their home,” he said as his family fled in two cars packed with essentials including mattresses, bags of rice and clothing.