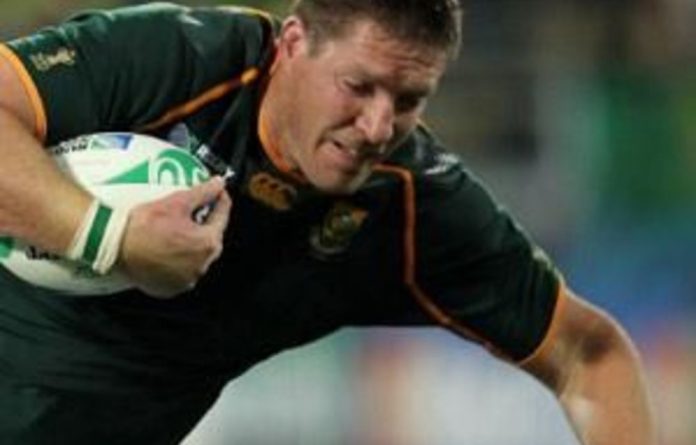 Rugby players do not cry, but when it was confirmed that Springbok lock Bakkies Botha would return home after injuring his Achilles tendon in training on Wednesday, there was no shortage of emotion at what could very well have been his last team meeting on Thursday.

“Bakkies had a talk to the team this morning and it did get a little bit emotional,” said wing Bryan Habana.

“We’ve had a guy that has really given his heart to this country for the last 10 years.

“He has become a good friend to a lot of us and he’s a strong character within this team, not only by the way he carries on off the field, but also his ability to bring this team together on the field.”

Habana described the mood in the team’s morning meeting as sombre and added that every player had again come to realise that every time they wear the Springbok jersey it could be their last.

He said Botha was a player who had given his all to the South African rugby team and that he considered himself fortunate to have become good friends with the man who commanded both fear and respect on the field.

“I think it is tough on the team, whether it was tougher losing Frans Steyn or New Zealand losing Dan Carter, it’s difficult to say.

“The ability he had to lift this team up will live on in our hearts for quite a while and hopefully he will have another opportunity in the next while to don the green-and-gold jersey,” said Habana.

Botha who has been capped 76 times and, along with Victor Matfield, holds the record for the most appearances as a lock combination (56) missed out on the Springboks World Cup matches against Wales and Samoa through injury.

He featured in the team’s victories over Fiji and Namibia, but was substituted on both occasions near the 40 minute mark.

Botha will join French club Toulon on November 1, after a long and prosperous career at the Blue Bulls.

Pierre Spies, one of the players who had shared many highlights with Botha at provincial level, said that a victory in Saturday’s World Cup quarterfinal match against Australia would be a fitting mark of respect to the long serving legend.

“I think it will be a fit tribute if we win the match this weekend, but we know there is a job at hand and we have to do it so if we needed that extra motivation I’m sure we will have it this weekend,” said Spies.

“Obviously it is very disappointing to lose a guy I have played with the past few years and he has made a big impact for both the Bulls and the Springboks and he has been a wonderful guy off the field as well as a great friend.

“We had a lot of laughs together and it is those things that go through your head.

“It is a very sad thing to lose a guy like Bakkies, but he definitely made his mark on the field and our lives also,” said Spies

Springbok prop Gurthro Steenkamp who will be joining French club Toulouse after the World Cup said that he could only imagine what must be going though Botha’s head at the moment.

“It was a very sad morning for us when it was announced that Bakkies will be leaving the World Cup squad,” said Steenkamp.

“I hope and pray for him that he has not played his last game in a Springbok jersey, and that he will get an opportunity again after the World Cup.

“My prayers go out to him and his family and we wish him all of the best,” said Steenkamp. — Sapa