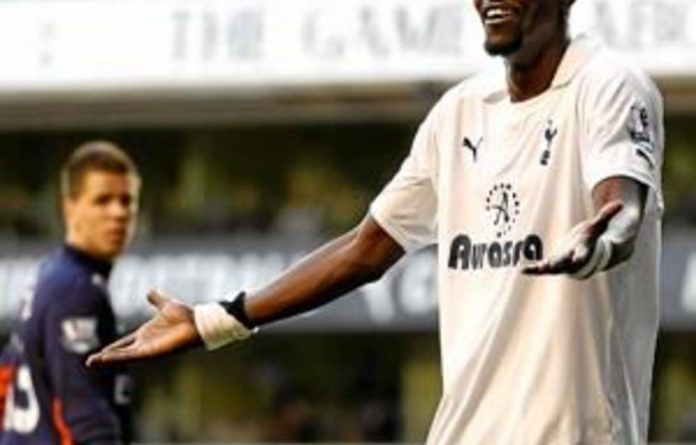 When thousands of football supporters voice their wish that a player from another team had died in a terrorist outrage, it is safe to say that the ensuing debate will be lively.

One of the craziest things, perhaps, about Emmanuel Adebayor’s treatment at the hands of the Arsenal supporters at White Hart Lane on Sunday this week is that the Tottenham Hotspur striker’s abusers felt they hadn’t done anything out of line.

But at the root of the emotions and the complex and seemingly irresolvable social arguments was a sense of frustration and helplessness.

The Adebayor chant, which was bellowed by what sounded like the majority of the visiting enclosure at regular intervals during the first half of the derby, seemed like a new low.

In reality, bile of similar proportions has been spouted at English grounds for decades. Only the previous week, at Elland Road in the Carling Cup, Leeds and Manchester United followers traded insults relating to the Munich air disaster and the murder of two Leeds fans in Istanbul.

The helplessness is felt by the game’s authorities and right-minded supporters, who surely continue to represent the silent majority, when ways of confronting and resolving the issue are sought.

But there is little appetite to pursue arguably the only measure that would have real clout, apart from, of course, police prosecutions of the individuals who cross the ultimate line.

The idea of implementing sanctions against clubs, such as the docking of points, for the bad behaviour of supporters presents a minefield. And that is before highly paid lawyers comb through the small print. How can one chant be deemed more or less offensive than the next? How many fans need to be chanting it? Where is the line to be drawn? People have different moral thresholds and there is an understandable reluctance by the Football Association to set any precedent.

Police and match-day stewarding teams face similar thorny judgment calls. A small number of Spurs fans were charged with shouting homophobic abuse at Sol Campbell in 2008, but when many hundreds of supporters are chanting in an obscene manner, the police can hardly arrest them all on the recommendation of the stewards who, as a rule of thumb, police the inside of the stadiums. No arrests were made over Sunday’s chanting.

The FA has reacted to the events at White Hart Lane, which also saw Tottenham fans sing a deplorable song about Arsene Wenger, the Arsenal manager, by opening talks with both clubs. They did the same thing after the Leeds vs Manchester United match. The governing body wants to ascertain what each club did to guard against such chanting and it hopes to work with them to stamp it out in future. Tottenham and Arsenal issued a joint statement this week, in which they condemned the abuse and said they did not tolerate “foul language, racist chanting, homophobic chanting or any anti-social behaviour from supporters”. Working together, they intend to “identify the individuals involved”.

The FA has pointed the clubs to its good practice guide, which deals with this aspect of crowd control. The governing body has ideas on how to address the problems, including the use of CCTV to identify ringleaders, police and stewards filming the stands, the deployment of covert personnel and messages through various media. An example of the latter is how the Manchester United manager, Sir Alex Ferguson, has used his programme notes to appeal to his club’s fans to stop the abuse of Wenger. Education and self-policing by the clubs and supporters appear to be the most viable way forward.

The disconnect between many fans and top-level players is greater than ever. Empathy is low to nonexistent, there seems to be an underlying resentment of players and there is a theory among supporters that anything ought to be allowed.

The game has taken great strides in the battle against hooliganism and racism, among other things, yet verbal abuse from the stands is a stain. It is doubtful that it will ever be eradicated. —