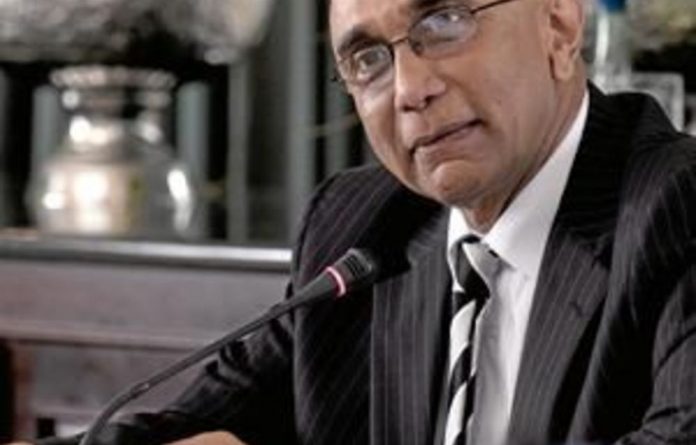 An unsigned submission from the Pietermaritzburg branch of the Black Lawyers’ Association is apparently behind the race row that erupted during the Judicial Service Commission’s (JSC’s) interviews for the KwaZulu-Natal judge president’s position this week.

The Mail & Guardian has a copy of the letter suggesting that the favourite for the position, acting KwaZulu-Natal Judge President Chiman Patel, was a racist “anti-black African”.

The plaintiff alleged that she contracted HIV/Aids after being treated by state emergency services following a road accident. Awarding damages against the state, Patel ruled that Franks had probably been infected by blood from a pedestrian who was killed in the accident and also treated by paramedics.

In its letter, the association said that, “considering that the deceased person whose blood it was alleged had infected Franks was a black man, Mthalane, we find that the conclusions and the inferences drawn by Patel AJP [acting judge president] were not only incorrect but hurtful to us as black people”.

The letter added that, because the judge president position was “a large interface with the legislature and politicians”, the incumbent “should be representative of the demographics of the province, and that the appointment of Judge Patel — will not enhance or be compliant” with these. Patel’s ancestry [Indian] and his alleged “pro-black Indian” bias, the association claimed, also gave rise to concerns about him being anti-black African.

Patel, who is contesting the position with KwaZulu-Natal Judge Mjabuliseni Madondo and Eastern Cape Deputy Judge President Lusindiso Pakade, has the support of 14 judges in his division, the KwaZulu-Natal Bar and Advocates for Transformation in the province.

‘Bordering on naked racism’
In a strongly worded response to the JSC, the Advocates for Transformation’s KwaZulu-Natal chairperson, Rajesh Choudree, said it distanced itself from the association’s letter “without any hesitation” and criticised it for “bordering on naked racism”. “The document relies on rumour and possibly hearsay without the accusers — possibly lawyers, at that — having the courage to put their names to the document or state the details of the so-called complaints, such as it would enable anybody, but especially Mr Justice Patel, to respond adequately”.

According to the association, the “rumour” was related to Patel allegedly saying (at an undisclosed event to undisclosed people) “that he is not interested in the Africanisation of the Bench but more in excellence”.

Pietermaritzburg chairperson of the association, Sthembiso Kunene, refused to comment on the letter and referred the M&G to national chairperson Nano Matlala.

Matlala said the national association “endorsed that letter because branches know better the candidates in their areas”.

JSC spokesperson Dumisa Ntsebeza said the letter was an “aberration” that “should not have found its way to the Judicial Service Commission”, as the association nationally appeared to have “departed from the well-trusted procedure of commenting as a body and not branches”.

During Patel’s JSC interview in Cape Town on Wednesday, Ntsebeza raised with him the “perception” that if he became judge president he would favour Indians over Africans in appointing acting judges.

Patel replied that, as acting judge president, he had appointed eight acting judges for the next term, five of them black Africans.

Asked to comment on the association’s letter, he said: “I did respond to the matter during the interview and I wouldn’t want to say anything further as it is a sensitive issue.”

Race and ethnicity dominated the interviews for the position.

Inkatha Freedom Party JSC member Koos van der Merwe asked Madondo if the time was not ripe to appoint an “Indian” as a KwaZulu-Natal judge president.

Madondo responded: “I don’t think so. We still have things to address — imbalances, all kinds of things, which need more insight, which a person who is not [a black] African cannot be privy to.”

The committee says if two complaints against him are found to be true, they are “extremely serious”
Read more
Coronavirus

In an extraordinary move for a judge, the deputy judge president says she secretly recorded a meeting that proves she was insulted by Judge President John Hlophe
Read more
Coronavirus

COMMENT This year, Freedom Day on April 27 came and went without celebration for women in townships and...
Read more
Advertising
Continue to the category
Coronavirus