The Oil for Food scandal so far 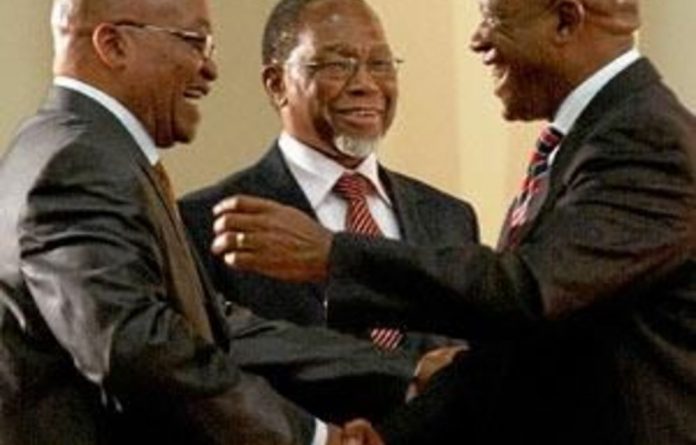 The release of the Donen report into the Oil for Food scandal may well reopen a Pandora’s box of allegations about kickbacks and diplomatic favours traded for oil from Saddam Hussein’s Iraq.

Apart from the ANC, which wanted to profit from Iraqi crude oil allocations through connected trader Sandi Majali, those implicated include a former, an incumbent and an aspirant South African deputy president.

The Mail & Guardian was the first to reveal Majali’s visits to Iraq to solicit allocations under the Oil for Food Programme, administered by the United Nations as a limited exception to an international embargo.

Majali was accompanied more than once by senior party and government officials, including Deputy President Kgalema Motlanthe, who was ANC secretary general at the time.

Questions remain about Motlanthe’s proximity to Majali’s negotiations with Iraqi officials when they demanded a multimillion-rand kickback, which was subsequently paid in part. Also apparently aware of Iraq’s demand for kickbacks was Phumzile Mlambo-Ngcuka, then minerals and energy minister and later deputy president.

Iraq levied the kickbacks in contravention of the UN embargo because all proceeds of oil sales should have been paid into a trust account that would be released for humanitarian purchases only.

To create room for these “surcharges”, as Iraq called them, the regime sold its oil at a discount. The discounts were also exchanged for diplomatic favours — allocations were made to politicians and their cronies.

Human Settlements Minister Tokyo Sexwale, regarded as eyeing at least the deputy presidency in the next administration, obtained allocations separately from Majali. A joint venture he was part of paid millions of rands in kickbacks, but he has attempted to distance himself from these.

Mlambo-Ngcuka declined to comment on Thursday: “I am so uninterested — I am just busy writing my thesis.” Spokespersons for Motlanthe and Sexwale said they would not comment for the time being.

Majali, whose death last December in a Sandton hotel room remains a mystery, first sought oil allocations from Iraq in 2000 using a company called Montega Trading. One of his partners at the time was Iraqi-American Shakir al-Khafaji, who had access to Hussein’s influential deputy prime minister, Tariq Aziz.

The UN’s independent inquiry committee investigating the Oil for Food programme reported in 2005 that Aziz had “specifically asked Mr Al-Khafaji to help strengthen the ties between Iraq and South Africa”.

Majali and Al-Khafaji — accompanied, as the M&G has revealed, by Motlanthe, then-ANC treasurer-general Mendi Msimang and then-ANC presidency head Smuts Ngonyama — travelled to Baghdad in December 2000.

“During their meetings in Iraq, Mr Majali described himself as an adviser to both the ANC and President Mbeki. After several days of meetings, Mr Majali was allocated two million barrels of oil,” the committee noted.

Majali and his partners in Montega traded the two million barrels in early 2001, but failed to pay the $464 632 (R3.75-million now) “surcharge” demanded of them. This put Majali at a disadvantage when he sought further allocations.

But in September 2001, Majali was in Baghdad again, this time accompanied by a delegation of senior government officials. Party and state lines were blurred as he and the officials variously lobbied to improve relations between the ANC and the Ba’ath Party and get oil allocations for the South African state — but through Majali’s company, Imvume, which was then new.

The M&G has published correspondence, including a letter Motlanthe addressed to the Iraqis at the time, saying Majali had the ANC’s “full approval and blessing”. Also published were Imvume proposals indicating the ANC would benefit should Majali get further allocations.

The delegation accompanying Majali included Mlambo-Ngcuka’s most senior officials at the department and ministry of minerals and energy. Their travel motivation, which she personally signed, recommended “that the right political atmosphere between Iraq and South Africa be created in order to win more business” under Oil for Food.

The motivation also revealed knowledge of the “surcharge imposed by the Iraqis on their oil allocation [which] makes it difficult for South African companies, especially black economic empowerment groups, to break into the market. This is one of the issues that needs to be addressed by both parties.”

In what was clearly no coincidence, the Strategic Fuel Fund, the state body that maintains South Africa’s strategic oil reserves, soon issued a tender for the supply of Iraqi crude worth R1-billion.

Imvume controversially won the tender — but when Majali needed the Iraqis to keep their end of the bargain so he could deliver, Iraq baulked because the $464 000 kickback demanded a year earlier remained outstanding.

Majali again met Iraqi officials in Baghdad on March 6 2002. At this meeting, it appears from a letter Majali sent to the Iraqi oil minister that June, he promised to pay the outstanding kickback in two tranches.

The UN committee’s report recorded that a day after Majali’s undertaking in Baghdad, a sealed letter from Motlanthe was forwarded to Aziz, the Iraqi deputy prime minister, by the Iraqi ambassador to South Africa.

The committee was unable to find a copy of Motlanthe’s letter, but noted that approval for Majali’s request for more oil was annotated by hand on the ambassador’s covering letter. The approval came from both Aziz and Iraq’s vice-president.

When there were further delays, Majali met with Aziz personally in Baghdad on May 10 2002. According to Majali’s June letter to the oil minister, Motlanthe was also present.

Was the kickback discussed at the meeting, and was Motlanthe present? Majali’s June letter was a request to reschedule the kickback repayments, and in that context “referred” to the meeting it said included Motlanthe.

There is no further record of what transpired at the meeting and Majali, although he subsequently confirmed that Motlanthe was in Baghdad at the time, denied he was present.

According to the UN committee’s report, Iraqi Oil Ministry records show that on May 20 — 10 days after the Baghdad meeting — an “advance” kickback payment of $60 000 was deposited at the Central Bank of Iraq. The payment was deposited on behalf of Imvume but it was unclear by whom it was done.

To what extent South Africa’s own inquiry into the scandal, headed by advocate Michael Donen, managed to unearth the truth behind both sets of transactions remains to be seen.

The Sunday Times, after a partial leak of Donen’s material in 2009, reported that Donen had wanted an extension of his terms of reference so he could subpoena more information from Majali and Motlanthe.

The Sunday Times also reported that Sexwale had told Donen in a statement that “although he had been made aware by his co-directors in Mocoh that the Iraqis demanded surcharges, he had made it clear that he was not at any stage prepared to sanction the payment of surcharges”. Donen, apparently, was not satisfied with the response.