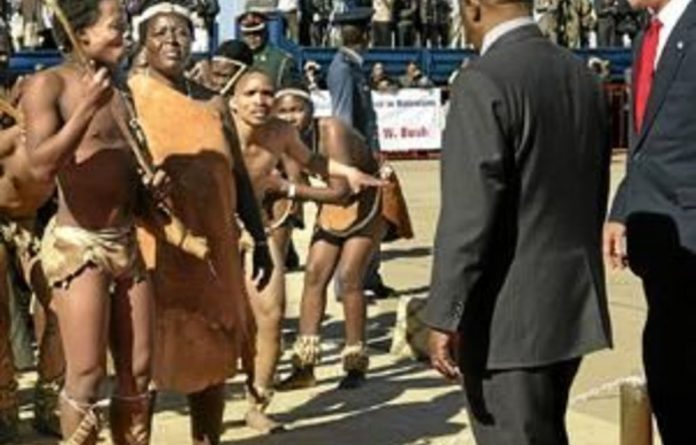 The Botswana government gave the United States the green light to explore the possibility of establishing an Africa Command (Africom) base in the country when the issue was raised four years ago, American diplomatic cables published by WikiLeaks show.

The revelations could provide ammunition for the ANC Youth League in the disciplinary hearing by the ANC of league leader Julius Malema and other league officials.

Malema has been charged in connection with his call for regime change in Botswana. He also described President Ian Khama as an imperialist puppet, in part in connection with claims that Botswana was talking to the US about an Africom base.

Youth league spokesperson Floyd Shivambu said the league knew of secret talks between Botswana’s former minister of foreign affairs and now Deputy President Mompati Sebogodi Merafhe and the US. “Merafhe also asked for arms from the US. Botswana is a threat to the continent and now we are being charged for saying that,” Shivambu said.

However, the facts that the meeting between the US and Botswana took place four years ago under former president Festus Mogae, not Khama, and that the US has not since established a base in the country, weakens the league’s position.

Malema said in August that “we know that Botswana is in discussions to open a military base for the imperialists”.

Nothing in the cables indicates that a military base is still under discussion.

Possible locations
Africom is currently based in Stuttgart, Germany.

In addition, the diplomatic cables show that the US apparently never intended to house soldiers at the base.

According to a cable sent by the American ambassador in Botswana, Katherine Canavan, to the US secretary of state in Washington in October 2007, Canavan and senior embassy officials met Merafhe and discussed possible locations for elements of Africom on the continent.

Canavan said Botswana, along with other unidentified African countries, was being considered for hosting some elements of Africom.

“Recalling the [government of Botswana’s] earlier receptivity towards the Africom concept, the ambassador sought to confirm Botswana’s current sentiments and whether the country would be willing to receive a technical assessment team in the near future,” the cable said.

It said Merafhe “appeared genuinely interested” but that he wanted to brief Mogae before committing to the American proposal.

Merafhe asked how many American troops would be based in Botswana but the US gave the assurance that combat troops would not be based in African countries, which would only host staff headquarters.

Five days later, according to the cables, Merafhe replied that, in principle, Botswana was not averse to the idea of hosting Africom and that Mogae was “favourably disposed”.
In 2007, Mogae declared that the Botswana government had not taken a final position on the ­matter “because we don’t know what the animal [Africom] will look like”.

According to a 2007 report by US think-tank the Centre for Defence Information, under the title “A big image problem down there: prospects of an African headquarters for Africom”, Botswana may have abandoned plans to host Africom under pressure from the Southern African Development Community.

‘Utter rubbish’
Botswana government spokesperson Jeff Ramsay could not answer the Mail & Guardian‘s questions. Ramsay’s general policy is not to comment on Wikileaks material. When the youth league made the allegations in August, Ramsay dismissed them as “utter rubbish”.

US embassy spokesperson Elizabeth Trudeau said this week that the permanent headquarters of Africom remained in Germany and that there was no plan to move it to Gaborone or another African country.

“There were preliminary discussions with many countries on the continent about co-operation with US Africom. However, in 2008, then secretary of defence [Robert] Gates stated that headquarters would remain in Stuttgart,” said Trudeau.

Last month, General Carter Ham, commander of US Africa Command, also dismissed suggestions that a base was planned for Botswana, saying it was a “practical decision” to leave the headquarters in Germany.

“Earlier on, there was some discussion of the possibility of establishing headquarters in Africa, but doing so would require a great expense and the United States is in a period where we have to be very careful about our expenses.”

Spokesperson for the opposition Botswana National Front Moeti Mohwasa said this week that the party’s MPs had raised ­concerns about the country’s alleged willingness to host Africom.

Mohwasa said that, because of the Botswana government’s “secretive nature” and laws that prohibited the free flow of information, it had not been easy to establish the government’s attitude.

“The government has not publicly distanced itself from hosting Africom. They have displayed favourable disposition to hosting it,” said Mohwasa.

Matter of fact
A previous version of this article incorrectly reported that Botswana government spokesperson Jeff Ramsay had refused to answer M&G inquiries about a United States diplomatic cable released by Wikileaks about talks between the US and Botswana governments on a possible Africom base in Botswana. It should have said that Ramsay’s general policy is not to comment on Wikileaks material. We apologise for the error.