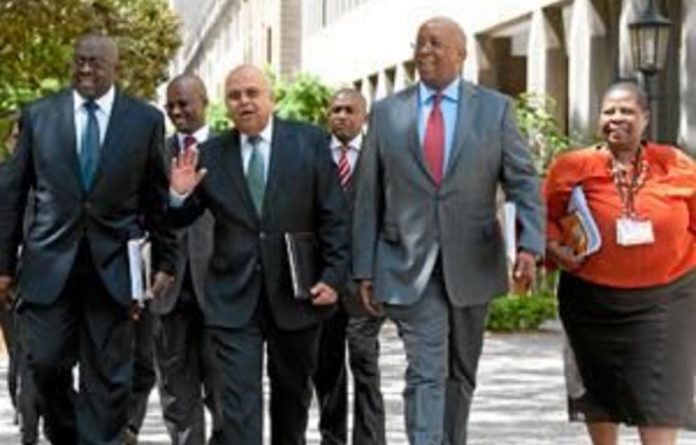 Cosatu general secretary Zwelinzima Vavi says there is paralysis in the Cabinet economics cluster and, on a cursory reading of Finance Minister Pravin Gordhan’s medium-term budget policy statement, it is tempting to agree. Tempting, but not quite right.

Paralysis suggests nervous system failure — the signals from the brain failing to get through to the muscles. Both Gordhan’s speech and the accompanying treasury documentation suggest something different: the massive strain of a wrestler fighting off a strong and determined opponent.

If there isn’t much movement it’s because the opposing forces are well balanced and, for the finance minister, it probably counts as a win just to stay in one place right now. For some on his treasury team, this is frustrating. They would like to see him clearing political space for a more aggressive structural reform programme, and feel he spends too much time managing Cabinet and alliance politics, rather than occupying the contested high ground of policy.

For these officials he treats the economic debate as if it were an outgrowth of Operation Vula, in which he played a key role, managing relationships, keeping secrets and smuggling material. Others in government argue he has little choice and needs all the covert skills he acquired in Vula to prevent a full-scale assault on the fiscus by looters, economic populists and even the “disciplined left”.

Gordhan himself finds this analysis deeply frustrating. He wants us to ignore the wrangling and focus on what he believes are obvious steps towards durable economic justice, which can be secured only in a sound macroeconomic framework.

In achieving that, his skills as a pharmacist are more to the fore than his revolutionary education. Pharmacists must be highly numerate and technically capable. They have to have a regard for the welfare of their customers but be able to spot the addict with a dodgy prescription, to keep an eye on the till and make sure that the books balance.

“We have to address inefficiency, extravagance and waste in public administration, for trusteeship is at the heart of the contract between government and its citizens,” Gordhan said this week.

Increased influence
Minding the store is a minimal role for a modern finance minister, but President Jacob Zuma’s decision to hand increased influence to the departments of economic development and trade and industry, as well as the freelance approaches of the energy, public enterprises and mineral-resources ministers, means Gordhan can influence policy primarily by saying no to dodgy tax incentives, ill-conceived subsidy programmes and unsustainable spending.

When he became minister at the height of the financial crisis the treasury was celebrating the “fiscal space” won during the boom years. What it meant was that there was enough fat in the budget to maintain spending growth and partially offset the global slowdown. The message of this budget is that the space is gone and the money hasn’t been spent on things that ensure more room in future. We’re in a corner.

Government debt is now heading toward 40% of gross domestic product. That is relatively low compared to the crisis-mired economies of the eurozone but about as high as a developing country wants to go. South Africa has experienced a sharper increase in its debt-to-GDP ratio than any of its major peers over the past seven years – 15%. Brazil and India have both grown GDP relative to borrowings, while Mexico, Chile and Thailand all hover between 5% and 10% growth.

Meanwhile, instead of the big ramp-up in spending on infrastructure promised since the 2003 budget first began to move away from the austerity of the early Gear years, too much of the money has gone on consumption expenditure, notably government salaries, rather than creating conditions for growth.

You don’t need advanced translation skills to understand what the budget review means when it says: “The measure of a strategy is not the breadth of objectives it seeks to address, but rather in its focus on those objectives that really matter— Difficult decisions are required to ensure that scarce resources are directed towards economic development and more effective service delivery, while ensuring that debt levels are sustainable.”

The government’s wage bill now accounts for 42% of revenue, up from 31% just four years ago. Growing debt to fund such recurring expenditure makes it harder for the private sector, much lambasted for its failure to create jobs, to invest. As the budget review points out, stable inflation, low cost of capital and a competitive real exchange rate are crucial to private capital picking up some of the investment slack from the government.

The scale of the government’s failure in the past decade to drive its micro or real economy reform agenda is most evident in Gordhan’s remarks about the mining sector, where “energy constraints, inadequate transport capacity and uncertainty in the regulatory environment have held back progress”. In contrast, he said, “mining production expanded 30% in Australia and 44% in Brazil. This has provided a huge boost for investment, tax revenue, jobs and incomes.”

Scramble for tenders
A person not constrained by the fractured politics of Cabinet and the ANC could put it more bluntly. At Transnet, a scramble for tenders and executive control has distracted managers from the basic job of keeping trains on the tracks, let alone building more of them. Eskom has been a victim of policy incoherence and internal wrangling. Mining regulation introduced to ensure the transformation of the sector was woefully botched in execution and used as a tool to steer resources to politically connected elites, as in the ArcelorMittal/Sishen hijack.

The message is clear: no amount of ambitious policy is going to begin to address unemployment if we don’t get these basic things right. Of course, Gordhan is under huge pressure to fund far more elaborate schemes, including the many priorities of the new growth path and industrial policy action plan, and the growing wage bill of the petty bourgeois public service unions.

His backstop is the global economic situation and the brutal reality of the eurozone crisis. So this is a budget statement made through gritted teeth: frustrated, hemmed in and determined. The left is constrained by the stark clarity of the debt markets and the treasury centrists by the political weight of their Cabinet opposition.

One person can break the deadlock: Zuma. On the available evidence, he’ll support the finance minister as he holds the line, but his reserves of decisiveness don’t extend to finally tilting the contest his way. It’s too bad. Gordhan’s shopkeeper qualities are admirable, but the economy needs to see his revolutionary mettle.