Stealing the march on the Young Lions: Zuma 1, ANCYL 0 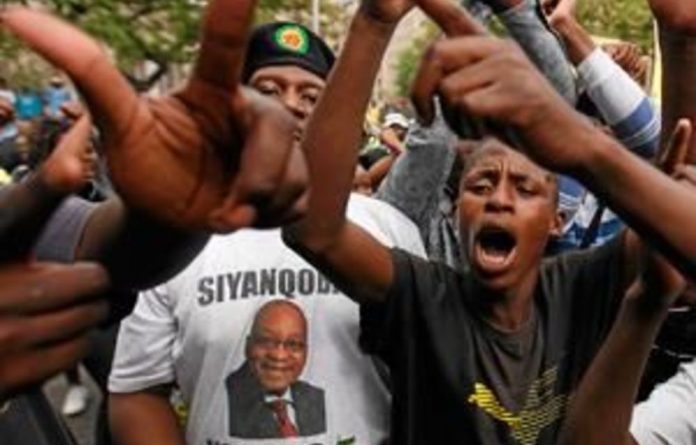 In a week in which President Jacob Zuma demonstrated his willingness to act forcefully and decisively, the ANC Youth League’s standing took a hit on Thursday when fewer than 5 000 supporters joined its economic freedom march to the Chamber of Mines headquarters in Johannesburg and the JSE in Sandton.

The weak response to league president Julius Malema’s call on the youth to demand jobs, free education and nationalisation of the mines will have consolidated Zuma’s hold on the levers of power. This week Zuma seized the initiative, reshuffling the national executive for the second time in less than a year, firing two ministers, suspending national police commissioner Bheki Cele and releasing the long-awaited terms of reference for the arms deal inquiry.

League representatives assured the ANC’s national working committee on Tuesday that the march had nothing to do with the 2012 leadership battle, and ANC secretary general Gwede Mantashe said that its assurances had been accepted.

However, the march strongly suggested the launch of a campaign to oust Zuma as party leader next year. The league wants deputy president Kgalema Motlanthe and ANC campaign head Fikile Mbalula to replace Zuma and party secretary general Mantashe respectively.

Protesters carried ANCYL-printed posters stating “Cde Kgalema Motlanthe for president come 2012”, and the handwritten “President Zuma forgot to fire himself”. League leaders led the crowd in chants that referred to Motlanthe directly as “president”. There was also support for ANC leaders who have testified in Malema’s defence during his disciplinary hearing, including Winnie Madikizela-Mandela.

The Mail & Guardian understands that at the hearing this week, Madikizela-Mandela took aim at Zuma and other top ANC officials for formulating charges against Malema. She argued that the ANC national executive committee, and not the ANC “top six”, is empowered to decide whether to charge Malema.

In defence of the youth league as a radical and militant structure of the ANC, Madikizela-Mandela cited heated debates over the armed struggle between former ANC president AB Xuma and former youth league leaders, including Nelson Mandela, Walter Sisulu and Oliver Tambo. She said Xuma had often underestimated the leaders of the league, referring to them as “boys”. They had later masterminded his removal as ANC president.

Anti-Zuma sentiment ran high among marchers on Thursday, with protesters telling the M&G that it was time for a change of leadership in the ANC. Godfrey Mnila (27), a league member from Polokwane, said: “Zuma is only looking after his family with tenders and jobs when, as president, he should be looking after every person in the country. This must stop.

“Every time there’s a problem or when the country needs the president, he is overseas. What kind of leader is he?” asked Mnila, echoing sentiments voiced about former president Thabo Mbeki before the ANC’s 2007 conference in Polokwane. Zuma was attending the Commonwealth heads of government meeting in Australia this week.

A youth league member from Claremont in Durban, who chose to remain anonymous, spoke of a small elite in the ANC “who want to hold onto power and possess everything for themselves because they are hungry. A freedom based on greed is a freedom of fools.”

When the march reached the offices of the Chamber of Mines in central Johannesburg it was greeted by a huge sign draped by the chamber reading: “We agree with you. Unemployment is too high. Poverty is too high. Inequality is too high. We must co-operate with you to achieve economic freedom.”

When chamber chief executive Bheki Sibiya accepted the league’s memorandum, Malema said communities where mining was taking place should benefit. “You have only taken disease to our communities, not riches,” he said. The league did not want to spill blood, he said, adding half-jokingly: “But to avoid blood spilled on the floor is to respond to these demands.”

This week, the Young Communist League, which supports a second term for Zuma, organised a parallel jobs summit in a clear move to undermine the march. The YCL gathering in Midrand was packed with pro-Zuma Cabinet ministers, including Higher Education Minister Blade Nzimande, Public Enterprises Minister Malusi Gigaba, Minister of Environmental Affairs Edna Molewa and Deputy Minister of Monitoring and Evaluation Obed Bapela.

In a veiled attack on the Zuma-supporting leaders in the South African Communist Party and Cosatu, Vavi said leaders had abandoned pro-poor policies to defend Mbeki’s neoliberal policies. “We are now singing differently. [If the situation is left unattended] the competition will end up being not about the capability to lead— but who is next to the cabal that is ready to feed,” Vavi said.

“We’re being called extreme left, liberals, demagogues. There is no logic in throwing labels.” Vavi warned that if the ANC’s internal conflicts were not resolved, it risked losing more support. “After 2012 [ANC conference], after we have injured one another, there will be [national] elections. People will say to you, you said you will address rural poverty and corruption. You will hold a [ANC] flag but you won’t have anything to offer.

“We met the same situation during the local government elections. If we allow the current situation, in 2014 we will have nothing to offer. If we allow the ANC to fail, Cosatu will also fail,” Vavi told the Numsa delegates.

Nationalisation firmly on agenda
The ANC Youth League has not backed off from its demands to nationalise South Africa’s mines, saying it envisages the state taking a minimum 60% stake in each mine. The league handed its demands to Chamber of Mines chief executive Bheki Sibiya in central Johannesburg on Tuesday. They include:

Sibiya said that, although the chamber and its members were in agreement with the stated objectives of the league to reduce poverty and inequality as well as to create jobs, the chamber did not agree with the mechanisms proposed by the league, in particular nationalisation, as this would severely damage the economic performance of the country and leave the population in a worse state than before.