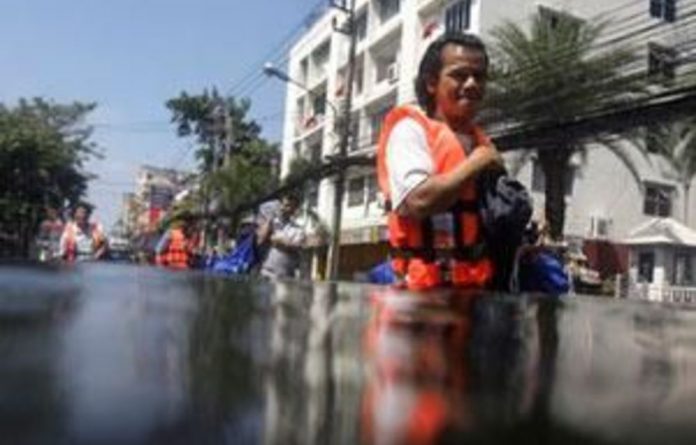 Thai authorities tried to stem growing anger among flood victims on Tuesday as water swamped new neighbourhoods and the government began mapping out a plan costing billions of dollars to prevent a repeat disaster and secure investor confidence.

The floods began in July and have devastated large parts of the central Chao Phraya river basin — killed nearly 400 people and disrupted the lives of more than two million.

Inner Bangkok, protected by a network of dikes and sandbag walls, survived peak tides on the weekend and remained mostly dry.

Large volumes of water are sliding across the land to the north, east and west of the city, trying to reach the sea and being diverted by the city centre’s defences into new suburbs as they recede in others.

In the north eastern city neighbourhood of Sam Wa, angry residents demanded the opening of a sluice gate to let water out of their community. Residents jostled with police on Monday and Prime Minister Yingluck Shinawatra ordered that the gate be opened by a metre.

But city authorities warned that the flow through the gate could move via a major canal into large parts of the city which are now dry.

“We are opposed to it but the government has ordered the BMA to open the gate, so more water will come,” said Bangkok Metropolitan Authority (BMA) spokesperson Jate Sopitpongstorn.

“It could reach the Bang Chan industrial estate. We have to see the consequences,” he told Reuters, adding that residents of the area had been told to be on alert.

An expert from the government flood management team played down the danger to inner Bangkok of opening the sluice gate, saying the flow was relatively small compared with the amount coming in through leaks in the city’s dikes.

“Inner Bangkok is not so much an issue,” said academic Anon Sanitiwong Na Ayutthaya. “At least we know what to do, it’s just a matter of time to fix the leaks.”

The disaster has been the first big test for the government of Yingluck, the younger sister of former premier Thaksin Shinawatra, who was ousted in a 2006 coup.

Yingluck, a political novice, took over this year after an election that many Thais hoped would heal divisions that triggered street violence last year.

Saving central Bangkok from a ruinous flood would be an important victory. The city’s 12-million people account for 41% of Thailand’s gross domestic product (GDP).

But prolonged misery in outlying areas and heavily flooded provinces to the north would take the gloss off any victory for Yingluck, especially given a perception that those areas have been sacrificed to save the capital.

To the north of Bangkok, Pathum Thani and Ayutthaya provinces have been largely inundated for weeks along with seven industrial estates that have sprung up over the last two decades on what used to be the central plain’s rice fields.

‘Be prepared’
People eked out a living in the flooded provinces on Tuesday with women cooking over gas stoves in the shade of plastic sheets strung up over pick-up trucks while men in their underwear cast fishing nets into water covering roads.

Cars, trucks and taxis were bumper to bumper for about 20km on an elevated road out of Bangkok, parked and abandoned safely above the murky tide.

The cabinet met to work out a recovery plan that one cabinet minister said this week could cost up to $30-billion, including an overhaul of the water-management system and rehabilitation of industrial estates.

Deputy Prime Minister and Commerce Minister Kittirat Na Ranong said the government would need to borrow “hundreds of billions of baht” to recover and prevent a repeat of disaster during the annual rainy season.

“Any investor, ambassador, I talk to, they never ask how high the flood waters are but what will Thailand actually do to prevent this from happening again,” Kittirat told reporters.

The government would invite experts from inside and outside the country to help draw up the plan and he would approach the Asian Development Bank to discuss financing.

“We have to be prepared for the future,” Kittirat said. “Preparation and the prevention of floods and drought is something we must start to do now.”

No repeats
Yingluck said on Monday she had assured Japanese investors there would be no repeat of the disaster. The government expects it will take three months to get the flooded industrial estates back on their feet.

Thailand is the second largest exporter of computer hard drives and global prices are rising because of a flood-related shortage of major components used in personal computers.

Thailand is also south east Asia’s main auto-parts maker and Japan’s Honda Motor Co. said car production could be difficult in the second half of its business year ending in March. Its Ayutthaya plant has suspended work indefinitely.

The Bank of Thailand has nearly halved its projection of economic growth this year to 2.6% from July’s 4.1% estimate and said the economy — south east Asia’s second largest — would shrink by 1.9% in the December quarter from the previous three months due to the floods.

Headline inflation rose to 4.19% in October from 4.03% the previous month as the flooding pushed up some prices but the central bank said the rises were temporary and it would focus on longer-term factors in setting policy.

The floods submerged four million acres, an area roughly the size of Kuwait, and destroyed 25% of the main rice crop in the world’s largest rice exporter.

The deluge was caused in part by unusually heavy monsoon rain but the weather has been mostly clear for the past week. The BMA said 2.245mm of rain had fallen this year to the end of October, 40.8% above average. — Reuters