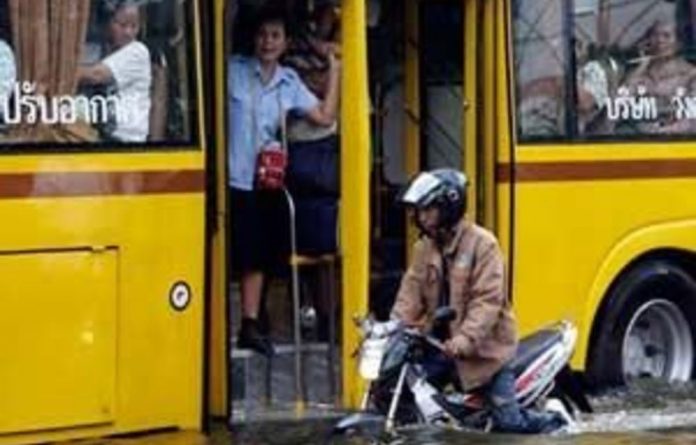 Authorities in the Thai capital repaired a damaged flood gate on Wednesday that has become the focus of anger, fear and rivalry between arms of government battling the country’s worst floods in decades.

The central government led by Prime Minister Yingluck Shinawatra, sister of the ousted populist premier Thaksin Shinawatra, is at odds with the city government dominated by the main opposition and former ruling Democrat party.

The floods — that have killed 427 people since July — are the first big test for Yingluck, who came to power in a July poll many Thais hoped would heal divisions that last year brought violent clashes in south east Asia’s second biggest economy.

Inner Bangkok, protected by a network of dikes and sandbag walls, survived peak tides at the weekend and is mostly dry.

But huge amounts of water are bottled up to the north, west and east of the city and new areas are being flooded daily as the water tries to find its way out to sea to the south.

Anger is seething in flooded communities on the wrong side of inner Bangkok’s flood barricades.

Looming danger
Residents of the north eastern Bangkok suburb of Sam Wa took matters into their own hands this week and hacked away at the side of a canal flood gate, aiming to let the water flow out of their area towards the city centre.

Yingluck ordered the gate opened in the face of the residents’ demands. The Bangkok government objected on the grounds that the flow could endanger the city centre.

But the city had to comply with Yingluck’s order to open the gate by a metre, leading to fear among inner city residents that the disaster they thought they had dodged was looming again.

On Wednesday, city officials and workers went to the Sam Wa flood gate to repair the damage and limit the amount of water flowing through.

“We are here doing the repair work and the police are protecting us,” said city administration spokesperson Jate Sopitpongstorn.

“They have to accept it,” he said of the neighbourhood’s residents. Several hundred police officers were on hand and there were no protests.

City governor Sukhumbhand Paribatra, watching workers with heavy machinery fix the gate, down-played the political clash and said everyone had to cooperate.

But, referring to the central government’s change of heart and order to open the gate, he said everyone should stick to decisions.

‘Complicated system’
The floods began in July at the beginning of a particularly heavy rainy season.

Water is also approaching central Bangkok from the northern Don Muang district where the city’s domestic airport has been flooded and where one resident said the water had risen 5cm in his house on Wednesday.

City deputy governor Theerachon Manomaipaiboon said workers were building a wall of giant sandbags to try to stop the flow towards the city centre from the north.

The wall is expected to be finished in three days but the flood is difficult to predict as it makes its way through the city’s suburbs and a poorly maintained and often partly built-over network of canals and tunnels.

“We have a very complicated system. Water in one area can appear 20km away,” Theerachon told Reuters.

Avoiding responsibility
Bangkok’s 12 million people account for 41% of Thailand’s gross domestic product (GDP) and neither the central government nor the city administration wants to be seen to be responsible for an inner city deluge.

Both sides will claim victory if the centre can be saved.

But misery in outlying areas, especially north and west Bangkok, and provinces to the north will take the gloss off any success in the inner city, especially given a perception those areas have been sacrificed to save the well-to-do city centre.

Thonburi, on the west bank of the Chao Phraya, opposite central Bangkok’s glittering Grand Palace and Chinatown, is mostly swamped with water chest-deep in places. It could be flooded for weeks, experts say.

To the north, Pathum Thani and Ayutthaya provinces have been largely inundated for weeks along with seven industrial estates that have sprung up over recent decades on what used to be the central plain’s rice fields.

Thailand is the second-largest exporter of computer hard drives and global prices are rising because of a flood-related shortage of major components used in personal computers.

Thailand is also south east Asia’s main auto parts maker and Japan’s Honda Motor Co said car production could be difficult in the second half of its business year ending in March. Its Ayutthaya plant has suspended work indefinitely.

“The ‘Motown’ of Asia has become ‘Waterworld’ overnight,” the Nation newspaper said in an editorial — referring to Thailand’s position in the motor industry. — Reuters

Storm in a Thai red bowl