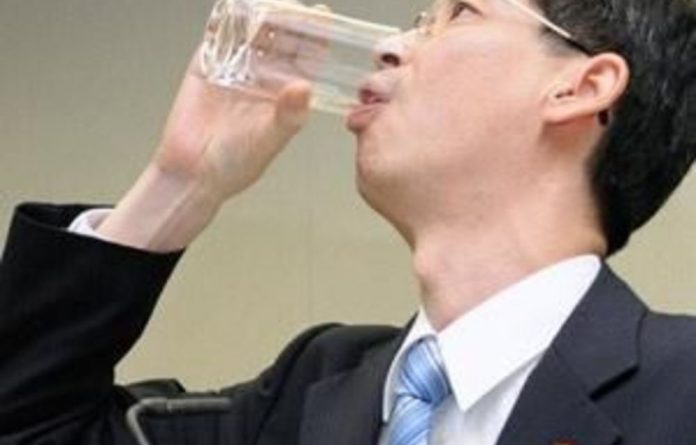 It was a simple gulp of water, but one that Japan’s government hopes will carry symbolic importance as it seeks to ease concern over decontamination efforts at the scene of the country’s nuclear crisis.

Yasuhiro Sonoda, an MP in the governing Democratic party of Japan (DPJ), was visibly nervous as his lips met a glass of water collected from inside two reactor buildings at the Fukushima Daiichi nuclear power plant.

The 44-year-old had been cajoled into making the gesture by journalists who repeatedly asked him to substantiate government claims that decontamination efforts at the plant were progressing.

Sonoda’s hands shook as he half-filled the glass from a plastic bottle, before polishing off the water in two swift gulps. He briefly held the glass up to the cameras, as if to prove that no sleight of hand had been involved.

Despite his reticence, Sonoda was not engaging in an act of masochism: the water in question, while once radioactive, had been stripped of radioactive iodine and caesium-134 and -137. Its source, reactors numbers five and six, suffered less contamination than other units at the plant.

Sonoda, parliamentary secretary at the Cabinet office, said his gesture was no publicity stunt: “I am aware that just drinking [the treated water] doesn’t in itself mean that safety has been confirmed. The best way to do that is to present data to the public.”

Performance
The cleanup effort at Fukushima Daiichi has been complicated by the buildup of massive quantities of contaminated water in and around the complex. Its operator, Tokyo Electric Power [Tepco], has started treating the water but is running out of places in which to store it.

Water from the reactors that were the source of Sonoda’s drink is being used to spray trees to limit the buildup of dust and prevent fires. But, according to officials, it was never intended for human consumption.

He was making good on a promise delivered in response to a challenge posed Yu Terasawa, a well-known freelance journalist, at a press conference last month.

Sonoda reportedly said at the time: “I don’t want it to be seen as some kind of performance, but if that’s the best way to prove that the water is safe then I would gladly drink it right here, in front of you, any time.”

He wasn’t the first Japanese politician to demonstrate his faith in the safety of food and water amid widespread concern about the presence of radioactive substances in beef and other produce from Fukushima prefecture.

In April the then chief Cabinet secretary, Yukio Edano, ate a strawberry from Iwaki, about 48km from Fukushima Daiichi, during a promotional event in Tokyo.

But comparisons with John Gummer, the Conservative politician who ate a hamburger to demonstrate the safety of British beef during the BSE crisis, might be misplaced. Unlike the former agriculture minister, who tried to get his daughter to take a bite of a burger, Sonoda did not enlist the services of members of his family. —

Japan has a diversified economy not heavily reliant on tourism. But with domestic spending already weak, the hit from a cancellation could ripple through and further depress local purchasing.
Read more
Advertising