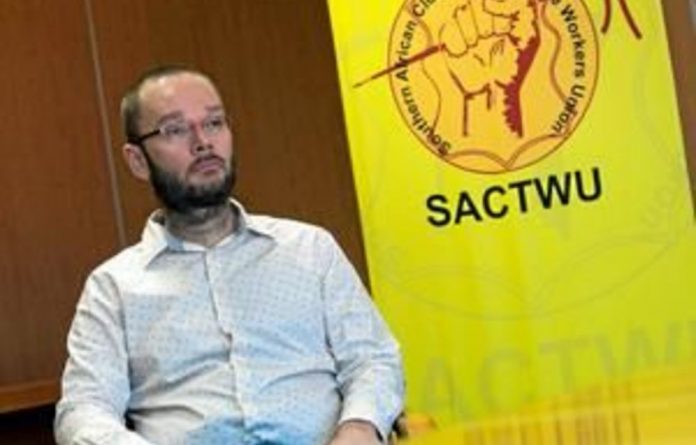 Clothing industry employment is stabilising, according to the job-loss database of the SA Labour Research Institute which records industry retrenchments, liquidations and factory closures. Stats SA too shows that, in the past three quarters, 2 500 jobs were lost in the industry, significantly less than before when considering that Stats SA also recorded clothing employment dropping from 120 000 in 2002 to 52 400 currently.

We are also receiving increasing reports of factories hiring new workers, even of new factories in the pipeline. This was unimaginable a few years ago.

The industry strategy, forged in 2007 between the South African Clothing and Textile Workers’ Union (Sactwu), clothing and textile businesses and the government, was finally implemented in 2009. It is starting to pay off. It includes new programmes to improve the skills of workers and managers, to replace old machinery, to reorganise work processes and to increase productivity. Support is also available for companies needing working capital to fulfil orders. The South African Revenue Service (Sars) is also targeting customs fraud more aggressively.

The strategy aims to stabilise (and even grow) employment by re-engineering companies to be more competitive in relation to imports.

The strategy seeks three key outcomes: to make price less significant by exploiting the locational advantage of manufacturers to local retailers — in other words, delivering orders to customers more quickly, to move the bulk of production to higher value-added products which do not compete with the mass of cheap imports, and to respect workers’ rights and their need to earn a decent wage.

State intervention is crucial in the game of international competition and industrial development. However, Sactwu recognises that industry stakeholders must also play their part. We do this through our jobs campaign, which includes local procurement advocacy with the government and retailers, and monitoring state tenders, bringing them to the attention of local manufacturers.

At factory level, we actively participate in mergers and acquisitions, factory rescues and training for layoff schemes. On the trade front, following an application to the government, we have secured increased duties for some finished products and we monitor World Trade Organisation and bilateral trade negotiations to ensure optimal outcomes for the industry.

We also play our part in the fight against customs fraud. Through extensive engagement at the National Economic Development and Labour Council, we’ve also introduced many amendments to the latest customs legislation, strengthening it with regard to illegal imports.

We analyse the impact of government support measures and advocate change to the rules when it benefits workers and the industry. We market the incentives to companies through emails and fax shots and regularly advise companies on the support measures that would best suit them.

We’ve focused on improving productivity too, though not in the narrow sense, which is simply an attempt to squeeze workers. We have helped craft a piece-rate productivity system for the industry, designed for non-metro areas. It works in the same way as Lesotho’s system — piece work is allowed but a minimum income must be assured. We have also trained workers on methods-time measurement and general sewing data and proposed and adopted a wage-linked productivity incentive scheme in 2009 at the clothing bargaining council.

Our efforts have complemented those of the state, helping to shift the fortunes of the industry. Admittedly, much still needs to be done. For instance, few companies have taken advantage of the productivity incentive schemes and many companies remain non-compliant. These non-compliant companies employ the minority of workers in the industry — 36% of total workers. These companies are immobilised by their determination to fight to pay workers less money. Their argument is that local wages are too high, that they cause job losses and must decrease. They cite the decimation of jobs in the industry over the past decade as their evidence.

The vulnerability of non-metro areas is not primarily wage related. It is due to companies in these areas being low margin manufacturers producing low-value products which are more easily exposed to mass-produced cheap imports. They compete with imports from highly subsidised countries or countries that peg their currencies to weaken them to make their exports cheaper. Previously, they blossomed through support from the apartheid state but became vulnerable when that support was rolled back in the 1990s and an expedited tariff phase-down was embarked on.

Botshabelo illustrates this well. Companies closed there not because of clothing workers’ wages — after all, many were not clothing companies — but because of deeper structural vulnerabilities.

Another challenge for companies has been increasing local municipal and rental costs. The demand for lower wages in South Africa ignores these critical factors. It also ignores the fact that we cannot win at the low wage game when countries such as Bangladesh pay workers as little as R75 a week. Practically and morally, we believe we should not even try to.

This is why the industry strategy seeks to steer it towards competitiveness not primarily based on low wages. The strategy is benefiting most of the workers in the industry. If non-compliant companies accessed the incentives and re-organised themselves in line with the industry’s plan, it would benefit their workers too.