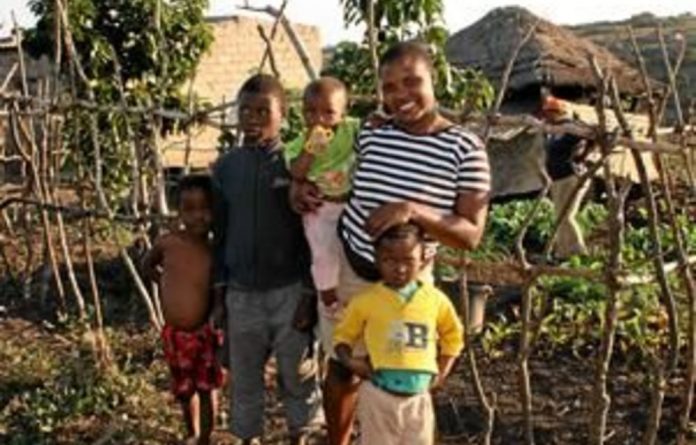 Ketiwe Myeni is sitting at the only table in her family’s small house trying to finish her grade 12 homework, but she is distracted by her 15-month-old daughter’s cry. “I can’t work,” she says, “because she always needs me.”

Myeni wakes up at 2am to start studying and works by candlelight until 5am. She then makes a fire in a corrugated-iron shack outside her family’s house to heat an iron to press her school uniform. And she must feed her daughter before setting out for the walk down the rocky dirt path to the only tar road in Ingwavuma, in northern KwaZulu-Natal, which takes her to school.

Myeni fell pregnant in grade 10 and gave birth in April 2010. A month later the 18-year-old was back at school.

She told her mom: “I know I’ve done wrong but please help me to finish school.” And so she passed grade 11 in the same year she had her first child.

Teenage pregnancy is common in rural Ingwavuma, where she lives. Doctors at the nearby Mosvold Hospital say half the estimated 180 women who give birth in the hospital monthly are 18 years old and younger.

Myeni watched her older sisters raise children as teenage mothers but says she didn’t know about contraception. “We use the old system of living,” she said. She kept her boyfriend a secret and didn’t discuss romance with either of her sisters. “We live a traditional life and must be old to have a boyfriend. You can’t even tell your sister.”

Teenagers hide the fact that they have boyfriends because traditionally a woman should be 21 before dating, said Mosvold Hospital social worker, Nobuhle Mapanza, who hails from the area.

The silence about sexuality leads to confusion. Mothers don’t speak to their children about sex, which means myths flourish. Also, contraception is stigmatised.

Fertility test
One of the most commonly heard myths is that a woman must test her fertility before using birth control. “I can’t do it before I test fertile,” is something Mapanza often hears. This myth resulted in 22-year-old Zinhle Malinga becoming pregnant at 19.

She dropped out of matric to have her child, looked after him for two years and, when she returned to school this year, the curriculum had changed. So she had to enrol for grade 10 again — at age 22.

Malinga said women without children can’t get contraception. “If you don’t already have a baby, it’s not easy. Sometimes you won’t find nurses willing to help you. The first time you go to the hospital they ask how many kids you have. If you say none, they don’t give you the prevention.

“Why do the nurses not like to give us prevention if they have the right to give it?” she asked angrily.

She said she even went to the town of Nongoma, 120 kilometres away, with a friend but she said the nurses shouted at them — because they said schoolgirls shouldn’t be sexually active — and chased them away.

Malinga wasn’t entirely ignorant about contraception. She said she overheard girls talking about it at the borehole. They got it privately from the “special doctor” — a term for a private GP who charges higher prices than the state hospital. But teenagers without money cannot approach him for help.

Social worker Noxolo Mngomezulu said it’s not true that nurses won’t administer contraception. “The nurses know well that they must give [birth control] — they must provide [it].”

Mngomezulu said that during the September reed dance teenagers “cheated” their way through virginity testing or pledged to act like a virgin in future. This meant they could not be seen getting contraceptives at a clinic. It isn’t necessarily the nurses who reveal who the girls are, she said — the community is small and anyone can spot a teenager at a clinic, especially the “pink ladies”, the cleaning staff who wear pink uniforms.

High school teacher Sydney Mabuza said his pupils say girls don’t want to be seen getting contraception. “News travels fast here. It is like a nervous system. The community is very small and the hospital is a no-go zone for getting contraception. What teenager wants to get treated for a sexually transmitted infection or get contraception from a boyfriend’s colleague?”

Once the girls have given birth, they go back to school and leave their babies in the care of their mothers. This means the babies aren’t breastfed regularly, sometimes with serious consequences. A nurse in Mosvold’s paediatric ward said half of all babies admitted to the ward were malnourished and usually their mothers are teenagers.

Child grants
Child grants are repeatedly blamed for the rise in teenage pregnancy. Mngomezulu said teenage pregnancy has increased since the inception of the grants. But, as much as grants play a role, they are not the only reason girls have babies. Both Myeni and Malinga said they became pregnant “by mistake”.

Neither of them gets a child grant because they don’t have ID books, a common problem in the rural areas.

Myeni said she felt pressured to have a boyfriend by her peers, who said: “If you do sex, your boyfriend will love you.” Life was also boring without a boyfriend and she wanted something to talk about at school.

“But they run away when I am pregnant,” she said. “I have no friends now.”

Myeni wants to go to university but she has a little girl to look after. “Life is hard,” she said.

“Even if I have no shoes, my parents say: ‘There is nothing to do. We are looking after your daughter now.'”

This feature was written with the support of the Anthony Sampson Foundation Award. www.anthonysampsonfoundation.co.za

‘I didn’t think it was necessary to use condoms because I was only 15.’