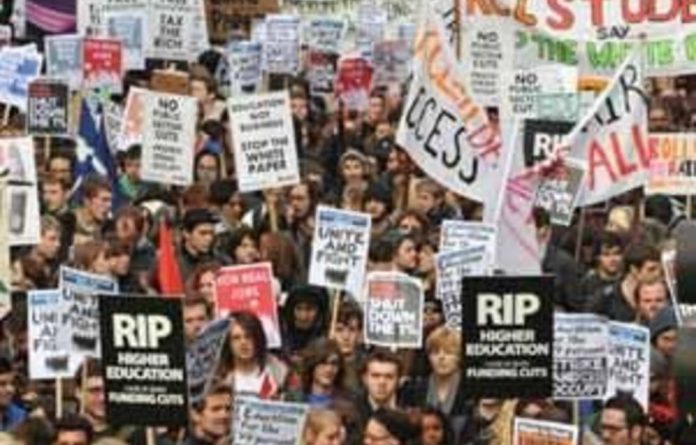 Thousands of students marched through London on Wednesday against cuts to university funding, facing off against police armed with rubber bullets amid fears of a repeat of violent protests last year.

Police cleared a group of protesters who pitched their tents in the tourist hub of Trafalgar Square, while sticks and bottles were thrown at riot officers in the financial district, Agence France-Presse correspondents reported.

Scotland Yard said police had made a number of arrests for public order offences. It said 2000 protesters were taking part, while the organisers of the demonstration said there were 10000 people involved.

The situation was tense, with police authorised to use plastic baton rounds if there is any repetition of last year’s violence, when Prime Minister David Cameron’s party headquarters was attacked on November 10 2010.

They are also the biggest protests in London since riots rocked the capital and other English cities in August, leaving five people dead.

“The message this year is the same as last year,” Michael Chessum of the national campaign against fees and cuts told AFP as the march set off from outside the University of London building in the centre of the city.

“Some people think the only way to make their point is by doing things beyond the law. We have students on the way to prevent trouble. But the majority of the violence comes from the police.”

No repeat
Scotland Yard said it had deployed 4000 officers for the protest to prevent any repeat of the violent scenes last year during similar marches against cuts to higher education funding and a hike in tuition fees.

The marchers went from the University of London to St Paul’s Cathedral in the heart of the financial district, where anti-capitalism protesters inspired by the “Occupy Wall Street” movement have been camping out since mid-October.

But a group of protesters had earlier broken off from the main rally to set up around 25 tents in historic Trafalgar Square at the foot of Nelson’s Column, which commemorates one of Britain’s greatest naval victories.

Police later moved in, hauling protesters out of the green and blue tents which officers then folded up.

“This is what democracy looks like,” screamed one protester with a trickle of blood running down his forehead, as police led him away in handcuffs.

Another protester, Glyn Jukes, told AFP the demonstrators were allied to the “Occupy London Stock Exchange” movement in St Paul’s.

Back on the main march, police handed out booklets to protesters advising them what to do if there is disorder, for example to stand aside and let officers work, demonstrators said.

Louisa Loveluck (22), who graduated with a degree in politics last year, said she still feared a violent response from the police.

“I don’t feel safe knowing that the police can use rubber bullets. I don’t have faith in the police,” she said.

The student protests began last year over plans to triple university tuition fees, which were subsequently passed by Parliament, but they say their opposition is now to a wider attempt to bring “market chaos” to the sector.

The fees hike triggered a series of four demonstrations in London against austerity measures, culminating in a chaotic protest on December 9 when the car carrying heir-to-the-throne Prince Charles and his wife Camilla was attacked.

Fears of violence have also been raised after London was rocked by riots and looting for four nights in August, which the government blamed on criminality, but which many analysts linked to high levels of deprivation in some areas. — AFP

Beatrice Debut
Beatrice Debut works from Johannesburg, South Africa. AFP journalist for Southern Africa. Formely in Nairobi, London and Paris. Views my own, RTs not an endorsement Beatrice Debut has over 1495 followers on Twitter.