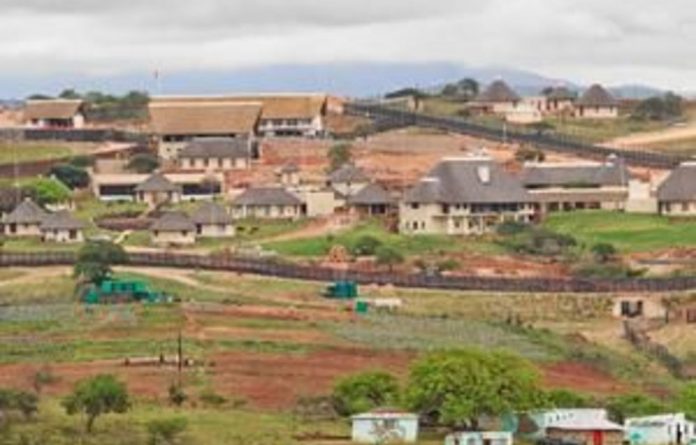 A network of underground rooms is the latest addition to President Jacob Zuma’s lavish Nkandla estate. There are contradictory claims about the costs of the project. After initially refusing to comment, the department of public works said it was spending R36-million on security related construction. Government and ANC sources have put the total budget at between R69-million and R400-million.

The department did not comment on the underground accommodation.

It also appears that one of the companies contracted by the department of public works to do construction work in Nkandla, Bonelena Construction Enterprise and Projects, employs Zuma’s niece. The M&G met a Bonelena manager who introduced herself as Mrs Zuma at the site. She is described by workers as the sister of high-profile nephew Khulubuse. The company declined to comment and other Zuma relatives contacted by the M&G refuse to discuss the issue.

This week the M&G visited the president’s homestead and interviewed six workers on the site. They all confirmed the additions, including three sets of underground living quarters with about 10 air-conditioned rooms. Other facilities include a clinic for the president and his family, a gymnasium, 20 houses for security guards that are above ground, underground parking, a helicopter pad, playgrounds and a visitors’ centre.

The public works department said it was paying for the construction of 10 houses for airforce personnel, 10 houses for SAPS personnel, a military health facility, perimeter fencing, the helipad, landscaping, bulk infrastructure and water supply, and houses for families who were relocated outside the compound.

According to architectural plans shown to the M&G in December 2009 the precinct would include a garden with ancestral graves. The area would be cordoned off by a brick wall and there would be provision for only one entrance.

The three houses were kidney-shaped and contained his-and-hers bathrooms, living rooms, walk-in closets and a study. One house had four bedrooms and another had three. The homes had double-volume ceilings and thatched roofs in the same style as the old homestead.

Zuma and his family, according to sources at Nkandla, would be able to enter the underground bunkers through a 200m-long tunnel running from under the helicopter pad to the main house. Two lifts have been installed for the president and his family.

Workers at Zuma’s homestead told the M&G this week that they had been instructed to complete the project by November 15, before the president, his wives and children arrive for the Christmas holidays. During the M&G‘s visit a festive mood was in the air. “Our president is making us proud. Look what he has done to Nkandla,” said one resident, who preferred to remain anonymous.

‘Code of secrecy’
Roads leading to Zuma’s homestead were being tarred this week. The provincial department of transport is sponsoring most of the multimillion-rand road construction projects. It appeared that most of the major construction work was complete, except for landscaping and paving in and around the premises.

Zuma’s new precinct will be officially opened in two to three weeks’ time, according to one of the construction managers. Although Bonelena boss Thandeka Nene initially denied that her company was involved with the renovations to Zuma’s homestead, the company’s project manager, Owen Nxumalo, confirmed that it had been contracted to do the work. But Nxumalo refused to provide more details about the project, saying he had been instructed not to talk about the matter in public.

When reached again on Thursday Nene said that she was prepared to talk, but felt uncomfortable discussing the matter telephonically. She invited the M&G to KwaZulu-Natal to discuss it.

Bonelena has a note on its website emphasising its commitment to a code of secrecy.

“All documents, material and correspondence that is handled by us will be treated as highly confidential and will never at any stage be divulged to any other party without the written consent of that particular client,” states the note.

The costly renovations at Zuma’s house are taking place amid concerns among opposition parties and the public about Cabinet ministers’ apparent lavish lifestyles. Zuma recently came under fire when it was revealed that the government was spending almost R400-million to renovate his official residences in Pretoria and Cape Town.

The upgrades at Zuma’s official residence include steam rooms, fireplaces, chandeliers, the construction of a sauna and changing facilities, revamping of a swimming pool and upgrading of security measures, including an escape route.

“Government, on the other hand, is apparently building a helipad for the military to land, medical facilities for use by military medical personnel and barracks for the SAPS protection unit. The intention is for the protectors and medical personnel to sleep in Nkandla, instead of far away in Eshowe, when on duty, or asking for accommodation from the Zuma household.”

Maharaj said the department of public works would be better placed to provide details of the costs.

“We want to emphasise that the actual premises of the Zuma family are being built by the president at his own cost,” said Maharaj. — Additional reporting by Nelly Shamase