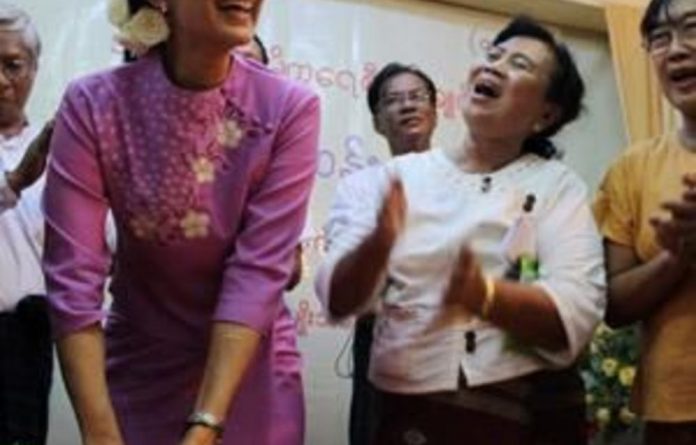 Myanmar’s democracy icon Aung San Suu Kyi is likely to contest an upcoming by-election, a party spokesperson said on Saturday, paving the way for a political comeback after years of exclusion by army generals.

Her National League for Democracy (NLD), delisted last year for boycotting the first elections for 20 years, will consider on Friday whether to re-register as a political party after Myanmar’s president recently approved changes to the registration laws.

“The NLD is likely to register and also Daw Suu is likely to participate at the coming by-election,” Nyan Win, a party spokesperson told Agence France-Presse. Daw is a term of respect.

It is not yet clear when a by-election will be held but there are more than 40 seats available in Parliament’s two chambers.

Suu Kyi swept the NLD to election victory in 1990 but the party was barred from taking office and it shunned last year’s vote largely because of rules that would have forced it to expel imprisoned members. Suu Kyi was under house arrest at the time.

Farce
Locked up for 15 of the past 22 years, the 66-year-old Nobel Peace Prize winner was released from her latest stint in detention a few days after last November’s poll, which was widely condemned as a farce by the West.

The new army-backed government has, however, surprised critics with a string of reformist steps, such as defying ally China by freezing work on an unpopular mega-dam in the north and holding direct talks with Suu Kyi.

The daughter of Myanmar’s independence hero Aung San, who was assassinated in 1947, Suu Kyi took on a leading role in the pro-democracy movement in 1988, the year that protests erupted against the military and were brutally crushed.

Widely known as “The Lady” in Myanmar, she became a beacon of hope for many in her country in the face of repression but was widely feared by the military rulers.

While Myanmar’s nominally civilian government is still filled with former generals, the government said in September it was ready to work with Suu Kyi and her party if they officially re-entered politics.

A decision to re-register is widely expected, with 100 senior NLD members gathering in Yangon on Friday to discuss the move.

Nyan Win did not comment on which constituency Suu Kyi would stand in, or what kind of position she expected, but party sources said she would contest in a Yangon township.

‘Real changes’
His comments came a day after US Secretary of State Hillary Clinton said Myanmar needed to do “much more” to improve human rights, despite her belief that “real changes” were underway.

“We continue to call for the unconditional release of all political prisoners and an end to the violence in ethnic minority areas,” she told reporters at an Asia-Pacific summit in Hawaii.

Myanmar’s law on political parties amended this month, and endorsed by President Thein Sein, removes the condition that all parties must agree to “preserve” the country’s 2008 Constitution, according to state media.

The wording has now been changed to “respect and obey”, it said — a small alteration but one that would allow the NLD to criticise and suggest changes to the Constitution.

Myanmar expert Aung Naing Oo of the Vahu Development Institute, a Thai-based think-tank, said the NLD’s return to the political process would offer the country “a better relationship with the international community”.

“It is really, really important for Burma. It will be seen as a normal country for the first time in 23 to 24 years,” he told AFP, using Myanmar’s former name.

Suu Kyi, who was feted by thousands of supporters in August on her first political trip outside Yangon since she was freed, is expected to hold a press conference on Monday to mark the first anniversary of her release. — AFP

#FeesMustFall activist elated after his house arrest conditions have been relaxed