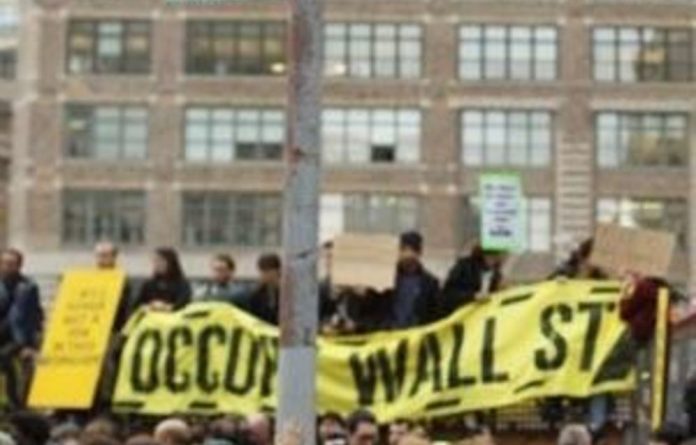 New York police evicted Occupy Wall Street protesters from a park in the city’s financial district early on Tuesday, two months after they set up camp and sparked a national movement against economic inequality.

Wearing helmets and carrying shields and batons, hundreds of police dismantled the sea of tents, tarps and protests signs at Zuccotti Park, arresting 147 people, including about a dozen who had chained themselves to each other and to trees.

As confused and angry protesters tried to work out how to regroup, sanitation workers laboured through the night to clear away mounds of trash from the privately owned, publicly accessible park, where hundreds of people had camped, then swept and mopped the granite space.

New York City mayor Michael Bloomberg and the park owners, commercial real estate corporation Brookfield Office Properties, had decided that the protesters had become a health and fire safety hazard to themselves and the local community.

“Protesters have had two months to occupy the park with tents and sleeping bags. Now they will have to occupy the space with the power of their arguments,” Bloomberg said in a statement, adding that the situation had become “intolerable”.

Parts of the park had developed a stench of urine and excrement, flower beds had been trampled, and authorities and protesters said there had been reports of sexual assaults, thefts and drug dealing.

The Occupy Wall Street movement, which began when protesters set up camp in Zuccotti Park on September 17, inspired solidarity rallies and so-called occupations in public spaces across the United States and in cities elsewhere in the world.

Movement bigger than the park
The cleaning of the park came ahead of plans by protesters to try and shut down Wall Street on Thursday — home to the New York Stock Exchange — by holding a street carnival to mark the two-month anniversary of their campaign.

Several hundred evicted protesters regrouped at a nearby square and proceeded at mid-morning on Tuesday to march through lower Manhattan streets before rallying in another park.

“Liberty Square [Zuccotti Park] was a metaphor and this is way bigger than that,” said Kyle Depew (26), a waiter from Williamsburg. “The seed’s been planted in everyone’s mind and that’s what this is about.”

The New York park had been due to reopen on Tuesday morning and the protesters were to be allowed to return as long as they stuck to new park rules — designed to prevent them from setting up a camp again — that included a ban on sleeping bags, tents and the storage of belongings in the space.

But court documents obtained by Reuters showed that New York State Supreme Court Justice Lucy Billings issued a temporary restraining order on the new park rules early on Tuesday, and until a hearing was held later in the day, authorities were not allowed to evict protesters from the park and could not enforce the rules.

As a result, Bloomberg told a news conference that the park would remain closed until the court order was clarified. A couple of hundred protesters mingled around the closed park on Tuesday morning, chanting “This is contempt of court,” but made no attempt to enter.

Protesters say they are upset that the billions of dollars in bank bailouts doled out during the recession allowed banks to resume earning huge profits — and executives getting million-dollar bonuses — while average Americans have had no relief from high unemployment and job insecurity.

Lost message?
They also believe the richest 1% of Americans do not pay their fair share in taxes.

“I’m glad they cleared the park,” said Patrick Hickey (45), who works in construction at the nearby World Trade Centre site. “I think the point they were trying to make was made a long time ago and it got lost along the way,” he said as he had a cup of coffee and watched the park being cleaned.

Mike Szumski (54), a technologist at a Wall Street bank he declined to name, hoped they would return. “They have a message and people around the world are responding,” he said.

Protesters vowed that the eviction from the park that had become the epicentre of their movement would not deter them.

“After this we get bigger. There is no question we get bigger. This is our chance to be heard,” added Jennifer Sarja (38), who had been bringing blankets and food to protesters staying in the park.

Justin Wedes (25) said the movement would only grow stronger. “Because every single person who was forced out of the park will bring five friends and everyone who heard about it will bring themselves and their friends,” he said.

Police had barricaded streets around Zuccotti Park, which had been lit up with spotlights. The eviction began at around 1am (0600 GMT) and the last protesters were removed by about 4.15 am (0915 GMT).

“They gave us about 20 minutes to get our things together,” protester Sam Wood said as the eviction was taking place. New York Police commissioner Ray Kelly told a news conference that protesters had 45 minutes to clear their belongings.

The protesters had set up a kitchen in the middle of the park and they also had a medical tent, a social media headquarters and a library. Protesters have said several hundred people had been regularly sleeping in the park.

Authorities had previously threatened to clear the park but backed down. On October 14, plans to clean out Zuccotti Park were postponed, averting a possible showdown between police and protesters.

Setting up camp
Meanwhile, London city authorities said on Tuesday they were resuming legal action to try to shift anti-capitalism protesters who have set up camp at St Paul’s Cathedral.

Around 200 tents have been pitched close to St Paul’s after protesters were last month denied access to the nearby London Stock Exchange. The protests were inspired by the “Occupy Wall Street” movement whose New York camp was dismantled by police in the early hours of Tuesday.

“We paused legal action for two weeks for talks with those in the camp on how to shrink the extent of the tents and to set a departure date — but got nowhere,” said Stuart Fraser, policy chairperson of the City of London Corporation.

“So, sadly, now they have rejected a reasonable offer to let them stay until the New Year, it’s got to be the courts,” he added.

The legal process was scheduled to begin on Tuesday with a letter asking for protesters to move tents and equipment which could be followed by a court order if protesters fail to comply.

“We are getting reports about vulnerable people, cases of late-night drinking and other worrying trends, so it’s time to act. It will clearly take time but we are determined to see this through,” said Fraser.

A spokesman for St Paul’s said the chapter, or cathedral’s authorities, would meet on Wednesday morning to consider their response.

The cathedral suspended its own legal action on November 1 after the resignation of its dean Graeme Knowles.

The presence of protesters at the landmark 17th century church in the heart of London’s financial district has posed a dilemma for the Church of England leadership.