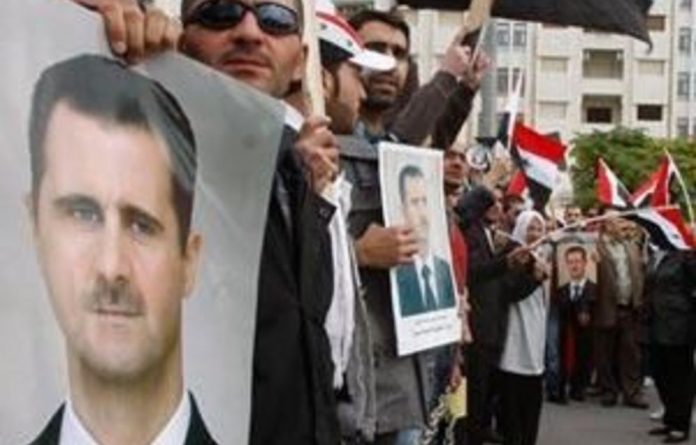 The Gulf Cooperation Council (GCC) on Tuesday rejected Syria’s call to hold an emergency Arab summit, making it very unlikely the Arab League would agree to hold the meeting.

Syria’s call on Monday for an emergency meeting of Arab leaders was an apparent effort to forestall its suspension by the Arab League over its violent crackdown on protesters.

Nabil Elaraby, the Arab League’s secretary general, said he had delivered Syria’s request to the 22-member states and 15 of them would have to approve in order to hold a summit, according to Egypt’s state news agency MENA.

The League’s suspension is a particularly bitter blow for Assad who has always seen himself as a champion of Arab unity. (Reporting by Isabel Coles; Editing by Jon Hemming)

Bloody crackdown
More than 70 people died in one of the bloodiest days of Syria’s eight-month uprising, activists said on Tuesday, as President Bashar al-Assad’s loyalists reacted angrily to growing isolation.

Around 100 of his supporters stormed the Jordanian embassy in Damascus overnight — the latest regional mission to be targeted since the Arab League voted on Saturday to impose sanctions — after Jordan’s King Abdullah II became the first Arab leader to publicly call for Assad to quit.

Buoyed by the fast-growing diplomatic pressure, Syria’s opposition stepped up its contacts with the regime’s remaining bulwarks, holding talks in Moscow, which last month joined Beijing in vetoing a UN Security Council resolution that would have threatened “targeted measures.”

Neighbouring Turkey, a former close Damascus ally that has been one of the most outspoken champions of reform, threatened to cut power exports to the Syrian national grid as it prepared to hold talks in Morocco with Arab leaders on Wednesday that are expected to be dominated by the bloodshed.

Fighting erupted
“We are currently exporting electricity [to Syria]. If the situation continues like this, we may be in a position to revise all these decisions,” Turkish Energy Minister Taner Yildiz said.

In a sign of the potential for civil war in one of the Middle East’s most pivotal countries, five regular army troops were killed on Tuesday in clashes with mutinous soldiers who refused orders to shoot on civilians, a human rights group said, after 34 were killed the previous day.

The fighting erupted in the town of Hara in Daraa province where the unprecedented protests against Assad’s 11-year reign erupted in mid-March, the Syrian Observatory for Human Rights said.

In Idlib province in the northwest, close to the Turkish border, “clashes between the regular army and armed men, probably deserters, caused at least 14 casualties — dead and wounded,” the Britain-based watchdog added.

A child was killed in the province’s Kfar Uma district where more than 20 explosions were heard during the clashes between the army and presumed deserters, it said.

Unidentified bodies
In the flashpoint central city of Homs, scenes of a deadly offensive by loyalist troops since the signing of an abortive Arab League peace deal earlier this month, 19 unidentified bodies were delivered to the main public hospital.

The Observatory said it feared the dead were among the victims of a spate of kidnappings by pro-government militia in the city — Syria’s third largest.

Desertions within Assad’s security forces — which have a professional hard core but also much larger conscripted ranks — triggered much of Monday’s death toll of more than 70.

A total of 34 soldiers and 12 suspected army deserters were killed in clashes, as well as 27 civilians shot dead by security forces in the regime’s intensifying crackdown, the Observatory said.

Most of the dead were in Daraa province, the uprising’s birthplace close to the border with Jordan, which has become increasingly outspoken about the bloodshed in its northern neighbour.

‘Step down’
King Abdullah II on Monday became the first Arab leader to openly call for Assad to step down, two days after the Arab League took the rare move of suspending Syrian membership of the 22-nation bloc and imposing sanctions.

“I believe, if I were in his shoes, I would step down,” the king said in a BBC interview.

Angry Assad loyalists stormed the Jordanian embassy in Damascus on Monday evening in response, mirroring similar attacks on the Qatari, Saudi and Turkish embassies, the ambassador told the Jordanian press.

Jordan and other Arab governments are due to hold talks in Morocco on Wednesday with Turkey whose Prime Minister Recep Tayyip Erdogan has warned that Syria stood on the edge of a precipice.

“The Syrian government is on a very dangerous and narrow path, like the edge of a knife,” Erdogan told lawmakers from his ruling party on Tuesday. “It is our common desire for him to turn back from this path, which has a cliff at the end.”

Adulation
Ankara’s tough stance has won it the growing adulation of anti-government protesters in Syria.

The six oil-rich Gulf Arab states said Wednesday’s planned meeting in Rabat meant there was no reason to agree to Syria’s request for an emergency Arab summit to review foreign ministers’ decision on Saturday to suspend its membership of the pan-Arab bloc.

The Gulf Cooperation Council “sees that the request to hold an Arab summit at this time is useless,” the bloc’s secretary general, Abdullatif al-Zayani.

The Syrian opposition held talks with Russia — one of the regime’s rapidly dwindling band of allies — in a bid to intensify the pressure on Assad to step aside.

Important signal
“We told our Russian colleagues that to make the start of the talks possible we believe it is necessary for Russia and the international community to send an important signal and demand Bashar al-Assad’s resignation,” Burhan Ghalioun, the Paris-based leader of the opposition Syrian National Council told the Interfax news agency after the talks.

The Damascus authorities released leading dissident Kamal Labwani who had been jailed for 12 years for engaging in contacts aimed at encouraging the United States to attack Syria, the Observatory said.

Founder of the Liberal Democratic Gathering, Labwani was arrested at Damascus airport in November 2005 after a tour of Europe and the US, where he held talks with White House officials. — Reuters-AFP