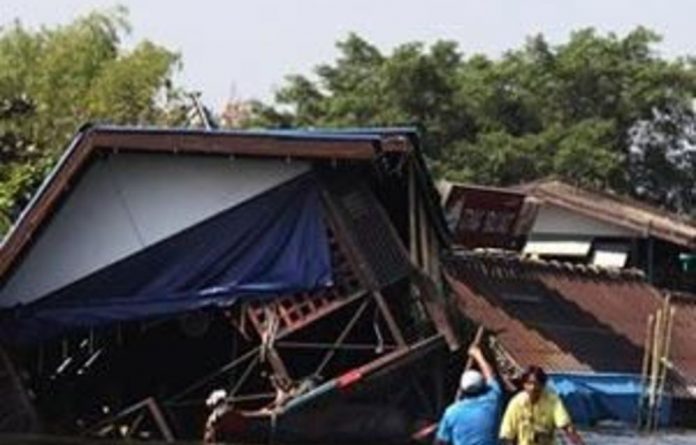 Insured losses from Thai floods could be in the double-digit billions of dollars and the disaster will lead to a re-assessment of weather risks to industries in Asia, a senior official from global insurer Allianz said.

Calculating the true cost of the floods could take years in terms of working out the lost business to Thailand from investors who might now choose to invest in other countries, said Lutz Fullgraf, Allianz’s regional CEO for global corporate and specialty.

He said the losses comprise compensation to building owners in Thailand as well as manufacturers around the world who have suffered disruptions from the closure of Thai factories and estimated they could turn out to be the world’s biggest from flooding in a decade.

“This for Thailand is definitely the costliest event, in terms of the insured values, even if you take into consideration the tsunami of 2004 and last year’s riots. The loss here is much bigger,” said Fullgraf.

He pointed to an estimate by Thailand’s insurance commissioner of more than $30-billion, although it was too early to verify the figure.

‘Flood losses’
“People did not have that [wealth and asset] accumulation expectation for risks in Thailand. Even if it is $20-billion, I think it will top the list of insured flood losses over the past 10 years,” he said in an interview in Singapore.

The disaster would lead the insurance industry to re-evaluate weather and other natural disaster risks to Asia’s rapidly expanding industrial zones, many of which are in areas vulnerable to earthquakes, storms and flooding, Fullgraf said.

“There definitely will be [a rethink]. Either through specialised companies that provide these modelling tools or insurance and re-insurance companies will assess their overall [risk] accumulation in these areas,” he said.

Standard & Poor’s in a report earlier this month said Thailand’s non-life insurers may collect gross premiums of about $4.7-billion this year, which meant the global insurance industry would take years to recoup losses from the floods.

“Clearly if you look at the Asia-Pacific region alone, there will not be very many happy faces in the insurance industry this year,” Fullgraf said, adding it was too early to say whether the Thai floods would affect insurance premiums globally.

Costliest floods
Allianz, Europe’s biggest insurer, said floods in China in May 2010 caused $18-billion in economic losses, topping a list of the world’s costliest floods between 2001 and 2010.

Flooding in Thailand has claimed 562 lives since late July and swamped about 900 factories in seven industrial estates north of the capital, disrupting supply chains of many international companies, including Toyota Motor Corp, Sony Corp and Lenovo Group Ltd.

The disaster could shave 2.5 to 3 percentage points off the country’s GDP growth, Thailand’s deputy prime minister has said.

Globally, PC shipments could be crimped by as much as a fifth in the first three months of 2012, hurt by the shortage of hard disk drives, said technology research firm IDC. Before the floods, Thailand accounted for 40% to 45% of global hard disk production.

‘No shock absorbers’
Fullgraf said the floods were a wake-up call, exposing the frailty of global supply chains for autos, electronics and even household goods like mouthwash.

“A loss like this always has knock-on effects because there are no shock absorbers anymore,” he said, as more major disruptions are likely from increasingly bad weather.

“The climate is changing and the question is really are we prepared for it, especially in Asia where there are a lot of developments at or close to the sea and low-lying areas. The impact will be significant,” he said.

Fullgraf said this means factory managers and board members of large manufacturers need to take a harder look at reducing the risks from wilder weather.

Knock-on impact
This could be as simple as building on higher ground or building factories with raised manufacturing floors.

“We will certainly pay a little bit more attention than we have in the past to flood risks in Thailand,” he said. “It will have some impact on how we approach underwriting in general.”

He said Thailand had been, in most cases, regarded as a non-natural catastrophe area, so the scale of the floods and the knock-on impact on global supply chains were a surprise.

Reinsurer Munich Re also said the floods were Thailand’s worst natural calamity and part of a global pattern in which weather-related catastrophes have more than tripled in the past 30 years.

Last week, Munich Re said a series of natural disasters in the Asia-Pacific, including the quake and tsunami in Japan and floods and a major cyclone in Australia, had caused $259-billion in economic losses for the first nine months of 2011. That is 80% of all losses globally. — Reuters