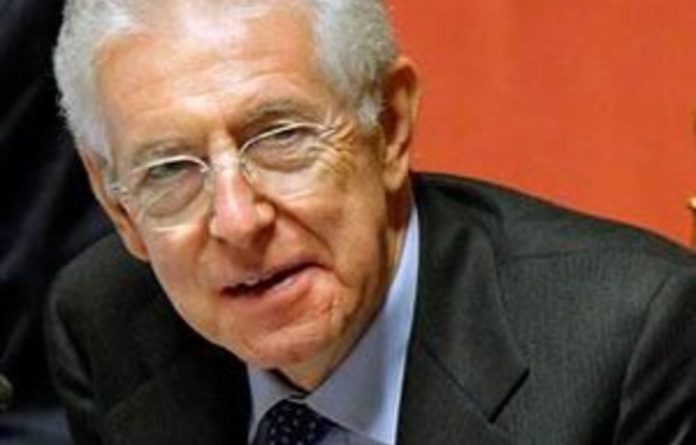 The bond auction has been pushed as a patriotic exercise with some banks agreeing to waive their commission in a gesture of support for the beleaguered economy in the eurozone nation.

But with the yield on Italian 10-year bonds, the broad cost of government borrowing, soaring back above 7% Thursday — new prime minister Monti knows he needs to act fast to stop the rot.

Asian markets mostly fell on Friday after a meeting on Thursday between the eurozone’s three biggest economies highlighted their differences on finding a solution to the debt turmoil gripping Europe.

Ahead of the talks in Strasbourg, French President Nicolas Sarkozy had called for the European Central Bank to act as a lender of last resort for the eurozone and issue bonds, a move strongly rejected by Berlin.

National unity
After the meeting, Monti, Sarkozy and German Chancellor Angela Merkel said they would move to reform EU governing treaties but insisted there would be no wider role for the ECB.

Monti, who took office earlier this month at the head of a technocrat government of national unity, tried to reassure the markets he meant business when it came to setting the eurozone’s third largest economy back on track.

“The objective of balancing the budget in 2013 is not called into question,” he said after the talks in Strasbourg, France.

“Italy must make a particular effort because it has a very high debt.”

Monti’s ability to rein in a debt burden of €1.9-trillion that has spooked the financial markets will be the ultimate test for Italy’s international credibility.

Tempered
But whatever hopes Italy’s new government might have for the bond sale will have been tempered by the experience of Germany, Europe’s strongest economy.

On Wednesday, Germany could not find buyers for more than €2-billion worth of 10-year bonds.

German bonds are the gold standard of eurozone debt but Berlin managed to draw bids of only €3.9-billion for a €6-billion auction, indicating that investors are now sceptical about even the safest European assets.

Rehn’s visit to Rome on Friday comes at a time which, by his own reckoning, is crucial for the entire 17-member eurozone.

“Ahead lies either the slow disintegration of the euro area or a significant strengthening of the monetary union,” Rehn told journalists during a visit to Helsinki on Thursday.

But he warned: “The contagion effect that started in Greece and spread to different EU countries has recently affected countries close to the heart of the EU area and has now touched even the hardest core of the EU”.

Rehn said what was needed were courageous and determined decisions without delay in next Tuesday’s meetings of the eurozone group in Brussels.

The debt crisis ate further into the EU on Thursday when Moody’s ratings agency announced it had downgraded Hungary’s government bonds by a notch to Ba1 with a negative outlook.

Moody’s said this was mainly over Hungary’s “ability to meet its targets on fiscal consolidation and public sector debt reduction over the medium term, in view of higher funding costs and the low-growth environment”. — AFP