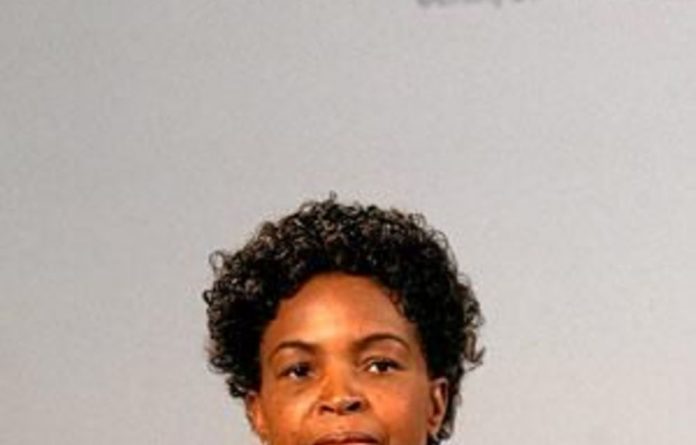 International Relations Minister Maite Nkoana-Mashabane has not declared to Parliament a R100 000 payment for around-the-clock private security at her private residence in Polokwane.

Premier Fishing is a subsidiary of JSE-listed Sekunjalo Investments.

Its executive chairperson, Iqbal Survé, has travelled overseas with the official business delegation accompanying President Jacob Zuma, Nkoana-Mashabane and other ministers on state visits and other government business. Survé is also a director of Premier Fishing.

The benefit is absent from the minister's declaration of interests released by Parliament's registrar of members' interests last week.

Nkoana-Mashabane, through spokesperson Clayson Monyela, said that her brother, Harry Nkoana, was the "caretaker" of the property and that she was obliged to declare only benefits accruing to herself and her children. She referred all further questions to her brother.

Nkoana said that although his sister still owned the property he took the loan from Survé without her knowledge because he had taken on the responsibility of caretaker.

These explanations were contradicted by the version of events provided by Sekunjalo spokesperson Kaveer Bharath, who told the Mail & Guardian that Nkoana had solicited the payments on behalf of his sister.

Nkoana conceded that the minister visited her Polokwane residence when she was in the province on government business.

He said he could not remember how many times she had done so, but estimated she had spent the night "less than 10 times" during the 12 months that Premier Fishing paid for the security.

Asked whether Nkoana-Mashabane would return to take up residence once her time in the Cabinet was over, Nkoana said: "The minister will let me know what she intends to do."

Paying for private security at the minister's house raises questions about whether Survé has attempted to curry favour with her to buy privileged access to global business and political leaders.

The M&G has seen an invoice, dated May 1 2011 and sent by Urban Africa Security — a Polokwane-based private security company — to Premier Fishing.

The invoice, for a monthly payment of R8 654.76, was for the provision of armed security officers, one for the day and one for the night, at an undisclosed Polokwane address.

The M&G visited Nkoana-Mashabane's home in Polokwane and confirmed that it was indeed patrolled by Urban Africa Security.

Premier Fishing began paying for the security on September 1 last year and paid the same amount for 12 months, until August 31. The company's payments totalled R103 856.88.

Less than a week before Premier Fishing started paying, Survé was among the 200-strong South African business delegation who accompanied Zuma, Nkoana-Mashabane and other ministers to China from August 24 to 26 last year.

In September this year, two to three weeks after Premier Fishing stopped paying for Nkoana-Mashabane's security, Survé was present at the United Nations in New York with an ANC delegation in the same week that Zuma, accompanied by Nkoana-Mashabane, represented South Africa at the 66th session of the General Assembly.

The explanation provided by the company does not appear to tally with that of the minister and her brother, or with the timing of events.

Bharath said the loan was a request from Nkoana to Survé to safeguard his sister after her husband, Norman Mashabane, had died.

Bharath said that the late Mashabane, a former ambassador to Indonesia, had been "close family friends" with Survé.

Bharath undertook to provide the M&G with details of the loan agreement — in particular the repayment terms and the reasons the arrangement was terminated after 12 months.

He had not done so at the time of going to print, but Nkoana claimed that the loan was "at prime" — the interest rate at which commercial banks lend to consumers.

Asked why he did not just go to a bank, Nkoana said he was in overdraft at the time. After 12 months, Nkoana said, his financial position had improved and he started paying for security once again.

Survé sought to distance the payments from an attempt to trade influence with Nkoana-Mashabane, pointing out that the department of trade and industry — not international relations — issues invitations to South African businesses to accompany government delegations on overseas trips.

Monyela made the same point.

Both Bharath and Nkoana said Survé had been a long-time friend of both the Nkoana and Mashabane families, even before Nkoana-Mashabane became a minister.

Survé said he had not accompanied politicians on any state visits between September 2010 and August 2011, the period during which Premier Fishing was paying for Nkoana-Mashabane's private security.

He added that scores of other South African businessmen received invitations to accompany state officials on visits overseas and he had declined such invitations on other occasions.

Survé claimed that he had been on state visits with presidents Mandela, Mbeki and Motlanthe before Nkoana-Mashabane became international relations minister in May 2009.

Monyela echoed Survé on this point.

Reeling off a list of his accomplishments — which include being co-chair of the World Economic Forum's Global Growth Companies group and serving on the Clinton Global Initiative's board of governance — Survé said: "I do not need to buy access. I have been a global business leader for the past 10 years."

However, neither Survé or Monyela addressed the issue of what happens during the trips, when government and business work together to promote South Africa's political and commercial interests abroad. Neither did they acknowledge that relationships and influence, once built, do not confine themselves to the set dates of state visits.

The M&G asked Survé to provide a list of all state and official visits he had been part of, either as a member of the official business delegation or in any other capacity, since Nkoana-Mashabane became international relations minister. He promised to do so, but was unable to meet the M&G's print deadline.

Instead, Bharath said Survé had been on more than 70 trips as part of business delegations in various capacities in the past 10 years.

"South African black businesses were denied access to international opportunities during apartheid, while other businesses benefited greatly from government assistance in the past [and continue to do so today]," Bharath said.

"We are unapologetic for pursuing this strategy and we are eager to make up for lost ground."

May 10, 2009 – Maite Nkoana-Mashabane appointed minister of international relations and cooperation.

September 14-16 – Survé attends the World Economic Forum's Annual Meeting of New Champions in Dalian, China, in his capacity as co-chair of the forum's Global Growth Companies.

September 18-21 – Zuma, accompanied by Nkoana-Mashabane, in New York for the the 66th session of the United Nations General Assembly.