Gbagbo jetted off to face ICC on rights abuses 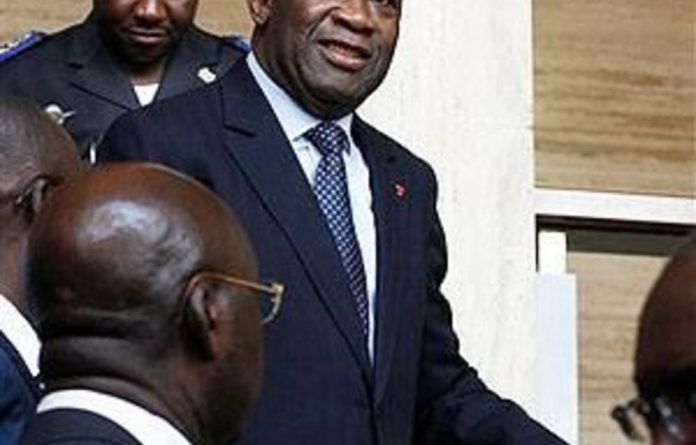 Côte d’Ivoire’s former president Laurent Gbagbo was transferred to the International Criminal Court (ICC) on Wednesday to face charges of rape and murder — becoming the first former head of state to stand before the tribunal.

Global human rights groups warned a prosecution only focused on crimes committed by forces loyal to Gbagbo and not his rival Ivorian President Alassane Ouattara would lead to an “explosive situation on the ground”.

Gbagbo (66) was remanded in custody on Wednesday after being flown to the Netherlands on a chartered flight as the first person to be brought to account over post-election violence that killed 3 000 people last year.

He had been under arrest since April.

‘Individual responsibility’
“Gbagbo allegedly bears individual criminal responsibility, as indirect co-perpetrator, for four counts of crimes against humanity, namely murder, rape and other forms of sexual violence, persecution and other inhuman acts,” the ICC said in a statement.

The crimes were allegedly committed between December 16 2010 and April 12 2011 after Gbagbo refused to recognise Ouattara’s election victory.

“This is the first case in the Côte d’Ivoire. It would not be the last case. This is just the beginning,” Moreno-Ocampo said.

“Ivorian victims will see justice for massive crimes,” he added.

Gbagbo’s first appearance is to be held “promptly”, the ICC said. His identity will be confirmed, the charges against him and his rights will be read out.

‘Economic crimes’
Côte d’Ivoire’s new rulers had been pressing for weeks to have him transferred to The Hague and the move comes less than two weeks before the December 11 legislative elections in the former French colony.

For months, since his arrest in Abidjan on April 11, he had been held in Korhogo, in the north of the country, as Ivorian investigators built a case centred on other lesser charges against him.

At home, Gbagbo faces charges for “economic crimes” allegedly committed during the political crisis and conflict triggered by his refusal to hand over power which sparked the deadly post-election conflict.

But the ICC had launched its own investigation.

Last month, its judges allowed Moreno-Ocampo to probe alleged post-election war crimes and crimes against humanity committed by both forces loyal to Gbagbo and also to those loyal to Ouattara.

“What we are seeing today [Wednesday] is the triumph of corruption, dirty dealing and shady connections to the detriment of the state,” Gbagbo’s spokesperson Justin Kone Katina said by phone from his Ghanaian exile.

He called Moreno-Ocampo a “scheming puppet … who allows himself to be manipulated by interests that are far removed from any sense of justice”.

In Côte d’Ivoire the leaders of three small pro-Gbagbo parties announced they were pulling out of the December vote in protest at the transfer which they argued would hamper national reconciliation.

‘Blessing for the country’
The government in Abidjan hailed the transfer and argued Gbagbo’s trial would give the country closure.

“This transfer is a blessing for the country,” Bruno Kone said. “It is one of the keys to turning the page on a sad episode in Ivory Coast’s history”.

But Francis Dako, the African coordinator at the Coalition for the International Criminal Court, urged the ICC to not only prosecute Gbagbo but also those in Ouattara’s camp suspected of crimes.

“A decision to go after the defeated president alone at this point is likely to be explosive on the ground,” Dako said.

“The ICC must be prepared to explain its decision as well as to reiterate that it will continue to investigate both sides and issue arrest warrants accordingly,” he said in a statement.

The ICC’s six other cases also relate to crimes committed in Africa. — AFP