Pakistan threatens to pull the plug on war on terror 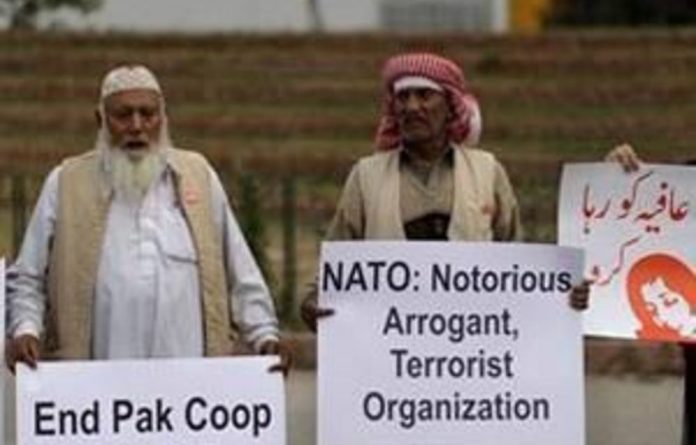 Pakistan, enraged by a Nato cross-border attack that killed 24 soldiers, could end support for the US-led war on militancy if its sovereignty is violated again, the foreign minister said, adding “enough is enough”.

The South Asian nation has already shown its anger over the weekend strike by pulling out of an international conference in Germany next week on Afghanistan, depriving the talks of a central player in efforts to bring peace to its neighbour.

“Enough is enough. The government will not tolerate any incident of spilling even a single drop of any civilian or soldier’s blood,” the News newspaper on Thursday quoted Foreign Minister Hina Rabbani Khar as telling a Senate committee on foreign affairs.

“Pakistan’s role in the war on terror must not be overlooked,” Khar said, suggesting Pakistan could end its support for the US war on militancy. Despite opposition at home, Islamabad backed Washington after the September 11 2001 attacks on the US.

In a development likely to exacerbate the crisis, two Pakistani men were killed in Afghanistan on Thursday and Pakistani border guards said Nato may have been responsible.

Worst of its kind
The officials said the two men, who were from the town of Chagai in the Pakistani province of Baluchistan, were gathering wood 30km inside Afghanistan. They said Nato helicopters fired on their vehicle.

“I can confirm that the bodies of two residents of Chagai have arrived from Afghanistan,” said Chagai Assistant Commissioner Tufail Baloch. “But I do not have any information on how they were killed.

It happened on Afghan soil so we don’t have many details yet.”

Nato helicopters and fighter jets attacked two military border posts in northwest Pakistan on Saturday in the worst incident of its kind since 2001.

Deliberate
The top US military officer denied allegations by a senior Pakistani army official that the Nato attack was a deliberate act of aggression.

General Martin Dempsey, chairperson of the US military’s Joint Chiefs of Staff, said: “The one thing I will say publicly and categorically is that this was not a deliberate attack”.

The incident has given the army, which has ruled Pakistan for more than half of its history and sets security and foreign policy, some breathing room after facing strong criticism from both the Pakistani public and the US after Osama bin Laden was killed in a secret raid by US special forces in May.

The al-Qaeda leader had apparently been living in a Pakistani garrison town for years.

Pakistanis criticised the military for failing to protect their sovereignty and US officials wondered whether some members of military intelligence had sheltered him. Pakistan’s government and military said they had no idea bin Laden was in the country.

Unrelated attack
Protests have taken place in several cities every day since the Nato strike along the poorly-defined border, where militants often plan and stage attacks.

Pakistan military sources said Islamabad had cancelled a visit by a 15-member delegation, led by the director general of the joint staff, Lieutenant-General Mohammad Asif, to the US that was to have taken place this week.

In an apparently unrelated attack, a bomb blew out a wall of a government official’s office in Peshawar, the last big city on the route to Afghanistan, early on Thursday, police said. There were no reports of casualties.

Arif Naiel Khil, head of public health in Logar, said the engineers were building a hospital for Logar paid for by Pakistani development funds.

Negotiating table
Nobody has claimed responsibility for abducting them.

The US has long wanted Pakistan, whose military and economy depend heavily on billions of dollars in American aid, to crack down on militant groups that cross its unruly border to attack Western forces in Afghanistan.

More recently, US Secretary of State Hillary Clinton asked Pakistan to bring all militant groups to the negotiating table in order to stabilise Afghanistan.

Regional mess
Nato hopes an investigation it promised will diffuse the crisis and that confidence-building measures can repair ties.

Pakistan says it has paid the highest price in the war on militancy. Thousands of soldiers and police have been killed.

“The sacrifices rendered by Pakistan in the war on terror are more than any other country,” Khar was quoted as saying. “But that does not mean we will compromise on our sovereignty.”

Critics allege Pakistan has created a deadly regional mess by supporting militants like the al-Qaeda-linked Haqqani network to act as proxies in Afghanistan and other groups to fight Indian forces in the disputed Kashmir region. — Reuters