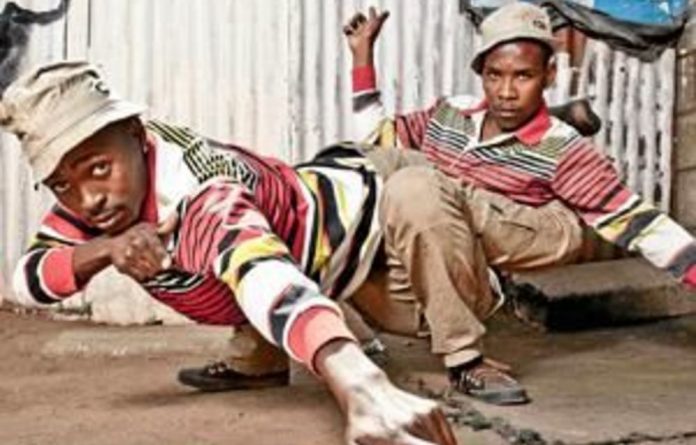 To dance pantsula, you must have all the right moves. Quick, quick. You must wear sneakers — Dickies, Superga — because, for pantsula, you need flexibility. Your feet are typewriter keys, tapping out stories. Your body is onomatopoeia. S’phara phara.

You must dress simply, like a gentle­man. You must always be clean. You should wear a nice belt with your trousers. You must not be a tsotsi, even though there are tsotsis who dress pantsula but are not pantsula.

You will tell people you are carrying a gun, although later you will say that you were not. You will threaten to shoot them to make them give you money, even though you don’t have a gun — even though you listened to Freddie Gwala singing Gumba Faya, and his songs gave you hope.

You never stopped dancing ever since you were 10 years old. You went from group to group. You danced in three groups.

Doing time
“Before Prince went to jail, the day before he was arrested — someone came to my place,” says 25-year-old Sithembiso “Mada” Moloi. Prince Mofokeng aka “Pringle” (28) is his performance partner, his friend. “[The guy] said he was carrying a gun. He said: ‘Let’s go to town and do some things’.”

That was in 2005. Moloi stayed behind. Mofokeng went to town (Johannesburg) and did some things. He robbed people at night and was arrested in the morning. “I got arrested on the last one,” he says. He doesn’t remember if that “last one” was a man or a woman, or why he carried on robbing for hours. “Maybe I thought the money we had was not enough,” he says.

In Zonderwater Prison, Mofokeng formed a new pantsula group. He carried on dancing, visited other prisons and performed for other prisoners. “Dancing kept me away from a lot of trouble,” he says.

While he was in jail, his mother sent him a letter. “She said I am the last child she had. She said if I didn’t change, I didn’t have to come and stay with her. I had to make a choice.”

Mofokeng had already decided that he would try to make a difference when he got out, that he would give dancing everything he had, that it was something that could save him. “I feel like a messenger,” he says.

“[Prince] did something wrong, but he realised it,” Moloi says.

He taught himself how to dance. He was a copycat, taking in moves he had seen, practising them in the kitchen. That is how he got his name: a mother teaches her own child. Mother. Mada.

Mofokeng has always loved movement but only learned about pantsula when he came to Soweto from Pretoria 18 years ago. “I can’t explain it through words. It is something I have to do in physical form.”

Their group is called Shakers & Movers. Pantsula is typically either large groups or solo performers, but theirs is largely a two-man show — they do dance with other people but, really, it is all about them.

Moloi says: “Our show is about [Prince’s] life, teaching young people not to do the same thing as Prince did. We go to schools and tell kids about Prince’s story.”

Learning the moves
Since July, filmmaker Bryan Little, who directed the award-winning Fokofpolisiekar: Forgive Them for They Know Not What They Do, has been documenting contemporary street dancing in South Africa for a full-length feature commissioned by Red Bull, which will be released next year. Moloi and Mofokeng are one of the groups he has been following.

“I’m just trying to immerse myself as much as possible. I knew nothing when I walked into it. It’s a great starting point — exploring the sub-culture in the way I discover them.”

Little says there’s something distinct about Moloi and Mofokeng. “Their brand of pantsula is full-on storytelling. It’s skilful, entertaining, funny at times.” He talks of watching the two men perform in what can start off as a relatively empty space (a club or a street), how their moves draw the crowds, how watching them dance is almost therapeutic. “They’re almost busking. They do so much stuff to make money. It’s difficult to monetise. Pantsula is still niche,” he says, not as commercial or as well understood as the beat boys.

“All the pantsulas, they are creative, they have different styles,” says Mofokeng. “What makes us so unique is something we have: attitude. We put attitude into our job. We even do that with our faces, with facial expression.”

The parallel yet familiar world of Tjovitjo

With season two set to debut on Netflix at the end of the month, filmmaker Vincent Moloi opens up on his artistic choices and inspirations.
Read more
National

Slice of life: Tapsula and the superhero

‘Tjovitjo’ speaks to the spiritual alchemy of blackness

A trio of Israeli films being shown around South Africa, explore the often invisible ­Palestinian and Israeli victims of armed conflict.
Read more
Advertising
Continue to the category
Politics