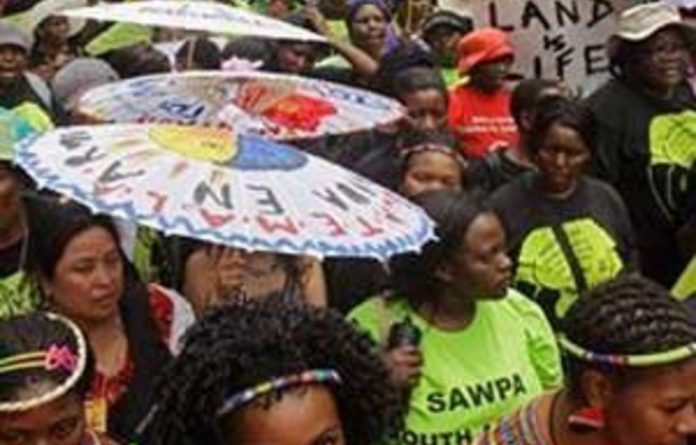 “They were [saying to] us: ‘How much money must I pay for your bitches?’ Both the marshals and the fellows in green [tracksuits with the COP17 volunteers’ logo] were saying this. We were angry, very angry’,” said Mercia Andrews of the Rural Women’s Assembly (RWA).

Andrews was recounting her experience and that of her fellow RWA activists after they had been moved behind a group of COP17 volunteers during yesterday’s civil society march on COP17 in Durban who had abused and intimidated them.

The organisation had been moved forward to act as a “buffer zone” between the Democratic Left Front (DLF) and what appeared to be agent provocateurs who, the Civil Society Committee for COP17 is alleging, were ANC members planted at the march by the local eThekwini Municipality so as to disrupt it. The green-suited group of about 300 people engaged in skirmishes and threw projectiles at members of civil society before the march had begun.

The Civil Society Committee and members of the DLF confirmed to the media on Sunday that they intended opening criminal cases against those individuals alleged to have set fire to DLF members’ placards and to have attacked them with water bottles and stones.

The DLF’s Vishwas Satgar also confirmed that the organisation would approach the office of the public protector Thuli Madonsela, to “investigate what we endured, which appears to be the use of public funds by this government to attack us”.

A complaint with the police’s Internal Complaints Directorate would also be lodged, because of the “police’s failure to act against what amounted to sustained and provocation and abuse”, said Satgar.

‘Major failure of the police’
According to a statement released by the committee, “a group of about 300 protesters, dressed in official COP17 volunteer uniforms, tore up placards [and] physically threatened and attacked activists participating in the march. In spite of heavy police presence throughout the march, including mounted police, riot police, air-patrol … snipers and requests to address this disruption, police did not take any action. This was a major failure of the police to act to prevent this group from destabilising the march and injuring other activists.”

“The threatening behaviour during the march yesterday constitutes an attack on democracy and cannot be tolerated”, the statement continued.

Satgar confirmed that one DLF member had injured his arm and received medical attention at a local hospital.

GroundWork’s Bobby Peek said the incident, which directly affected civil society’s constitutional right to protest, reflected badly not just on the municipality and South African government but also the United Nations Framework Convention on Climate Change, because those in COP17 volunteer gear that had disrupted the march were associated with all of these organisations.

Their actions were “directly contradictory to what [COP17 president and international relations minister] Maite Nkoana-Mashabane and [UNFCCC’s] Christiana Figueres told us when we accepted the memorandum — which they would engage with us”.

‘Unnecessary violence’
The green track-suited volunteers who descended on the march had initially tried to take over at its head before being sent to the back. While other activists were gathering and organising before the march started on Saturday morning, the “volunteers” situated themselves ahead of the DLF in the march.

The Mail & Guardian witnessed verbal provocation and the throwing of stones and water bottles at the DLF activists before the march began. Provocation continued for about half the time of the five-hour march.

Volunteers interviewed by the M&G said they were there “in support of COP17” and to “defend our president, Jacob Zuma”. Many claimed to be either ANC supporters or members from areas like KwaMashu and Umlazi. Several carried Zuma kangas and placards stating “100% Zuma and 100% Cop” and “Fire Malema”.

The committee statement also noted that “as volunteers {are] paid daily by the municipality of eThekwini, it is of grave concern that their intimidation of peaceful marchers was left unchallenged by those in authority. As such, the city manager [Mike Sutcliffe] and mayor [James Nxumalo], together with the UNFCCC, must answer to the involvement of this group and the failure of authorities to address this unnecessary violence.”

Ethekwini municipal manager Mike Sutcliffe said: “I thought the march went incredibly well. I know of no disruptions and certainly together with my team in monitoring the march saw nothing to suggest otherwise. I do know at the beginning there was a small issue and we took action to defuse things and as I say the march was pretty peaceful.”

He later said: “I understand there were actually a number of incidents and am rather surprised that only one is highlighted. I also find it strange that the city is being challenged when my teams have done so much to make the civil society space work.”

Sutcliffe refused to put a figure to, or detail, the incidents his monitoring team had picked up, calling the committee’s claims “silly”.

‘Unity’ man in battle for eThekwini