Fear of factions ahead of DRC poll results 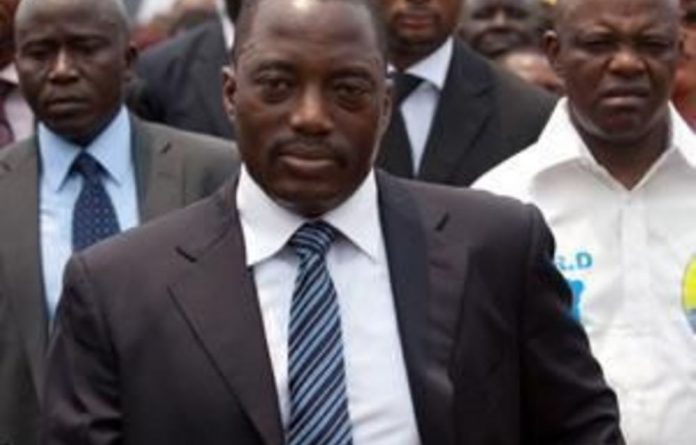 The African Union (AU) has urged politicians in the Democratic Republic of Congo to show restraint after the main opposition parties rejected partial election results that showed President Joseph Kabila in the lead.

With fears growing that the publication of preliminary election results in two days could lead to unrest, the continental body said candidates should make any challenges to the outcome through legal channels.

Results from around a third of polling stations give Kabila a clear lead over his main rival, veteran opposition leader Etienne Tshisekedi, who has strong support in the capital Kinshasa where outbreaks of violence occurred ahead of the poll.

The opposition says those preliminary results are skewed and were released early to prepare the country for a fraudulent final outcome. The election commission says it was obliged to publish the early figures because hackers put bogus results on its website showing Tshisekedi in the lead.

“(AU Commission President Jean) Ping strongly calls on the entire political class to show restraint and responsibility so that the announcement of the … results represent a moment of political maturity and reinforce democracy,” the AU said in a statement.

Voting along ethnic lines
Both Kabila’s and Tshisekedi’s camps say they are confident of victory, with Kabila’s coalition vowing to quash any unrest.

The partial tally released by the electoral commission so far shows Kabila leading with 3 275 125 votes, while Tshisekedi trails with 2 233 447 votes, based on 33.3% of polling stations counted.

But the count includes virtually no results from Kinshasa and the percentage varied widely by province. Geographical trends will likely have a strong influence on the overall figure as voting tends to be along ethnic lines in much of the country.

The largely Christian country’s National Episcopal Conference of the Congo (CENCO), which fielded some 30 000 election observers, called in a statement for election authorities to publish more information, including the number of spoiled ballots.

“We ask the Congolese people, political actors and the electoral commission to stick to the truth of the ballot box as expressed and published in the polling stations”, it said.

Protracted civilian unrest a possibility
On Sunday, Catholic bishops in the DRC sounded the alarm over the political situation, saying it was like “a train going toward a wall” as the country awaits election results.

Bishop Nicolas Djomo, president of CENCO, appealed for calm and warned that the country could see protracted civilian unrest similar to 1991 when locals in Kinshasa joined riots led by unpaid soldiers.

“We feel today as if there is a high-speed train heading straight for a wall, and no one wants to put on the brakes”, he said, urging political leaders to act responsibly.

The presidential and parliamentary elections have been marred by chaotic organisation, fraud allegations and violence, according to a toll provided by US-based Human Rights Watch. Fears of new violence are widespread after an election day marred by rebel attacks and rioting, and a campaign that saw deadly police crackdowns and repeated clashes between Kabila’s and Tshisekedi’s supporters.

The DRC’s government has beefed up security in anticipation of the announcement of the results. Overnight, UN peacekeepers, DRC riot police and heavily armed presidential guard soldiers patrolled the streets of Kinshasa.

Opposition parties on Saturday rejected the partial results and called on African leaders to intervene to prevent violence. Tshisekedi’s party has ruled out a unity government, such as those put in place to calm post-election disputes of recent years in countries such as Kenya and Zimbabwe.

Three candidates called last week for the election to be annulled. African election observer groups said the poll was broadly credible despite cases of irregularities.

The DRC’s elections commission is due to announce the provisional winner of the presidential race on Tuesday. The Supreme Court is then scheduled to give the final result on December 17. — Reuters, Sapa-AFP