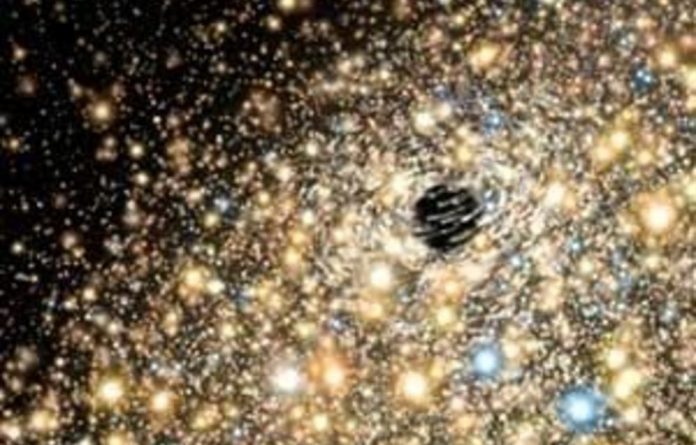 Scientists have found the biggest black holes known to exist — each one 10-billion times the size of our sun.

A team led by astronomers at the University of California, Berkeley, discovered the two gigantic black holes in clusters of elliptical galaxies more than 300-million light years away. That’s relatively close on a galactic scale.

“They are monstrous,” Berkeley astrophysicist Chung-Pei Ma told reporters. “We did not expect to find such massive black holes because they are more massive than indicated by their galaxy properties. They’re kind of extraordinary.”

The previous black hole record-holder is as large as 6-billion suns.

In research released on Monday by the journal Nature, the scientists suggest these black holes may be the leftovers of quasars that crammed the early universe. They are similar in mass to young quasars, they said, and have been well hidden until now.

Energised
The scientists used ground-based telescopes as well as the Hubble Space Telescope and Texas supercomputers, observing stars near the black holes and measuring the stellar velocities to uncover these vast, invisible regions.

Black holes are objects so dense that nothing, not even light, can escape. Some are formed by the collapse of a super-size star. It’s uncertain how these two newly discovered whoppers originated, said Nicholas McConnell, a Berkeley graduate student who is the study’s lead author. To be so massive now means they must have grown considerably since their formation, he said.

Quasars are some of the most energised and distant of galactic centres.

Boisterous youth
The researchers said their findings suggest differences in the way black holes grow, depending on the size of the galaxy.

Ma speculates these two black holes remained hidden for so long because they are living in quiet retirement — much quieter and more boring than their boisterous youth powering quasars billions of years ago.

“For an astronomer, finding these insatiable black holes is like finally encountering people nine feet tall whose great height had only been inferred from fossilised bones. How did they grow so large?” Ma said in a news release. “This rare find will help us understand whether these black holes had very tall parents or ate a lot of spinach.”

Oxford University astrophysicist Michele Cappellari, who wrote an accompanying commentary in the journal, agreed that the two newly discovered black holes “probably represent the missing dormant relics of the giant black holes that powered the brightest quasars in the early universe.”

Million dollar question
One of the newly detected black holes weighs 9.7-billion times the mass of the sun. The second, slightly farther from Earth, is as big or even bigger.

Even larger black holes may be lurking out there. Ma said that’s the million dollar question: How big can a black hole grow?

The researchers are already peering into the biggest galaxies for answers.

“If there is any bigger black hole,” Ma said, “we should be able to find them in the next year or two. Personally, I think we are probably reaching the high end now. Maybe another factor of two to go at best.” — Sapa-AP

Mame-Diarra Niang: A soul turned inside out

Mame-Diarra Niang’s vision for the invisible