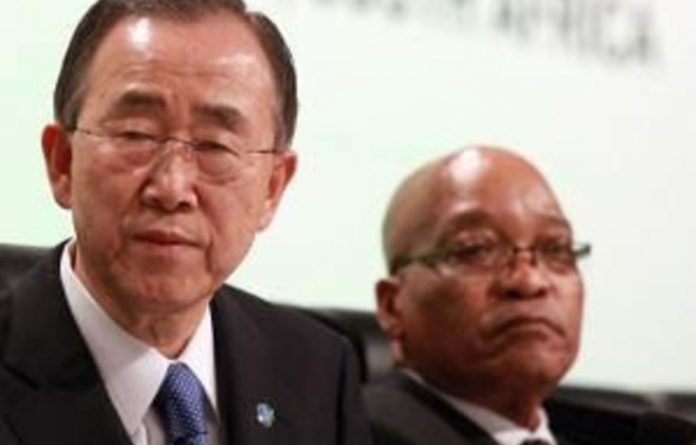 The world needs to move away from analysing and studying climate change to identifying practical adaptation actions, President Jacob Zuma said on Tuesday.

“There can be no dispute that research and analysis are important aspects of adaptation actions. However, we now need more practical action,” Zuma said at the opening of the high level segment of the 17th Conference of the Parties (Cop17) to the United Nations Framework Convention on Climate Change.

Listing issues that needed to be addressed during the last week of the conference, Zuma said the world had to start implementing actions on the ground.

“In this regard, the adaptation committee must be constituted. Its functions must be decided upon so that it can begin its work.”

The committee would help bring into focus what needed to be done for the world to adapt to climate change.

“The committee must bring an end to the current fragmented approach to adaptation in the convention,” he said.

There was also an urgent need for the green climate fund to begin.

“Developing countries demand a prompt start for the fund through its early and initial capitalisation.”

Economic problems
Zuma admitted that the early capitalisation of the fund would be difficult as many countries were facing serious economic problems which required them to tighten their belts.

He told delegates there was a need for countries to rise above their national interests, no matter how difficult.

“By now, all of us understand that Durban is a decisive moment for the future of the multilateral rules-based regime, which has evolved over many years under the convention and its Kyoto Protocol.”

The first commitment period of the Kyoto Protocol agreed in Cancun in 2005 was about to come to an end.

“It is also clear that if this question is not resolved, the outcome on other matters will become extremely difficult,” said Zuma.

Speaking during the high level dialogue and round table on global sustainability in a changing climate early on Tuesday, Zuma said climate talks should not be like the soccer world cup where only a few teams qualified and there was only one winner.

“This event is not like the 2010 Fifa Soccer World Cup tournament that we proudly hosted, where only a few soccer teams qualified, with one ultimate winner.”

Parties have to agree on the formalisation of mitigation pledges made by developed countries.

Zuma said developed countries which contributed immensely on emissions had to lead the global efforts to reduce greenhouse gas emissions.

“They must also lead through providing support to developing countries in their mitigation actions and efforts to adapt to the adverse impacts of climate change.” — Sapa

This is not who I am, says ‘Facebook rapist’