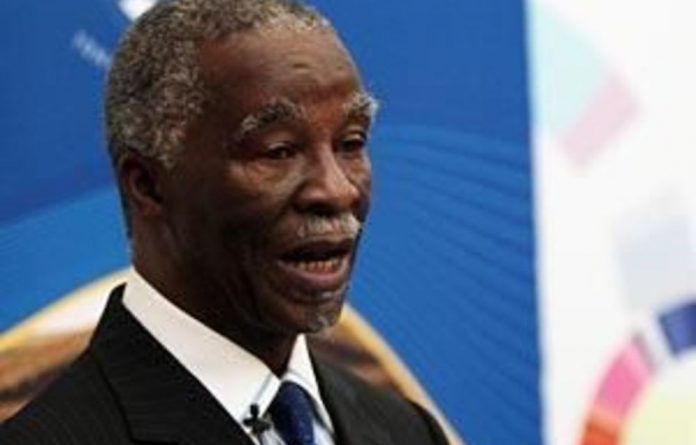 A lawyer for former president Thabo Mbeki’s foundation has asked the presidency for evidence of allegations that newly appointed SIU head Willem Heath reportedly levelled against him.

“The letter has been sent to the presidency,” Mbeki’s spokesperson Mukhoni Ratshitanga said on Thursday.

“There is no consideration of legal action at this stage. What we are seeking is just clarity.”

According to a statement from Mbeki’s office he rejected the allegations that he had initiated two criminal cases against his successor President Jacob Zuma.

“They are devoid of all truth,” Ratshitanga said.

He said Mbeki “categorically rejects” the Heath’s allegations. Heath made the claims in an interview with City Press, published last Sunday. He resigned as Special Investigating Unit head when Mbeki was president.

This came after a court ruling that he could not head the proposed SIU probe into possible arms deal corruption, because, at that time, he was a judge.

Taken into account
Zuma’s spokesperson Mac Maharaj told the Mail & Guardian he could not confirm if the letter from Mbeki had reached the presidency yet, but maintained the president would take note of his predecessor’s concerns.

“This is not a matter we would consider replying to in the public space but anything said by the former president will be taken into account as the president looks into it,” said Maharaj.

Ratshitanga said Heath made defamatory and malicious allegations against Mbeki in the interview with City Press. These included that Mbeki abused his position to compromise the criminal justice system by blocking some investigations into corrupt practices, and initiated the corruption and rape charges against Zuma by the national directorate of public prosecutions.

The corruption charges against Zuma and arms company Thint were dropped, and Zuma was acquitted on the rape charge.

Ratshitanga said: “The allegations made by Heath are very grave, more so because they are made by the head of a critical organ of our criminal justice system and suggest illegal conduct on the part of a former head of state and government.”

No basis
The Supreme Court of Appeal found no basis in the allegation of political interference on the part of Mbeki and the then Cabinet in Zuma’s corruption case, Ratshitanga said.

“Among other things, the SCA said that ‘the allegations [of political interference] were irrelevant, gratuitous and based on suspicion and not on fact’.”

Ratshitanga said Mbeki previously warned about the “use of fabrications to advance particular political agendas and to divert attention from the pressing challenges of the day”.

“If our broad leadership at all levels of society do not address this tendency, it may become an indelible part of our political culture and make it impossible for our country to address the real challenges we face.”

It was with great reluctance that Mbeki was being forced to comment on domestic politics and the Heath allegations, he said.

Mbeki was ousted as president in 2008 at the culmination of a long-running split in support in the ANC for himself, and Zuma. Mbeki had fired Zuma as deputy president after Zuma’s financial adviser Schabir Shaik was convicted of corruption.

Sectors of the ANC and the ANC Youth League publicly turned on Mbeki after this.