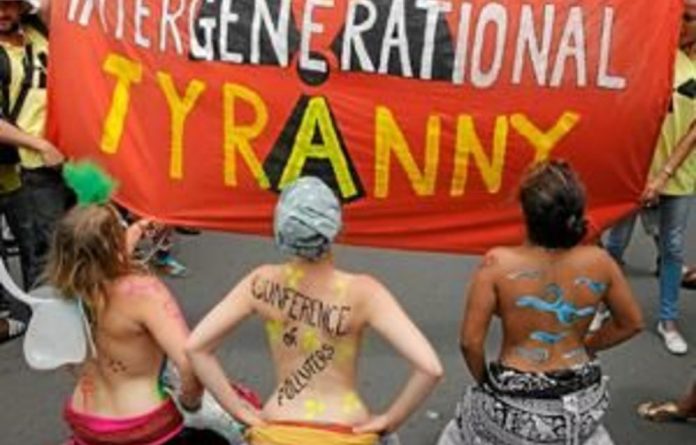 Jolly Chiou is a follower of the Supreme Master Ching Hai, and she wants the world to stop eating meat. “A vegan diet will stop most of the methane emissions in the world and there will be fewer cows — They poo on the land and it poo-loot the soil too,” said the Taiwanese national in a singsong voice.

Chiou is working at the Be Veg, Go Green 2 Save the Planet stand at Durban’s Expo Centre. With her Supreme Master, a cult leader described by one American newspaper as the “Immaterial Girl” and “part Buddha, part Madonna”, who owns a chain of Loving Hut vegan restaurants around the world, Chiou appeared to be making both environmental and financial sense in her conversion drive.

That was COP17 for you. Every man and his angle was in Durban, not so much to save the planet from environmental suicide but to punt new, greener ways to make some moolah.

Outside, dead palm fronds hung from camouflage netting like brown carcasses over the heads of COP17 delegates sipping cappuccinos and chatting ambivalently about the lack of progress in the negotiations.

For those not shaking their moneymakers there were fists and placards to wield — far from the fortress keep that has become the Hilton Hotel and the International Convention Centre, mind you.

Access to the main negotiating venues was heavily guarded against direct action from civil society organisations. Anyone articulating any sense of urgency or idealism about the Kyoto Protocol or the Green Climate Fund was ejected from proceedings. A Canadian youth delegation was forced to leave on Wednesday after protesting against its government’s intransigence on Kyoto and tar sands mining during an address by Canadian Environment Minister Peter Kent.

A sad line of Occupy COP17 tents was the only reminder that 2011 was the year of the possible: Tahrir Square, Occupy Wall Street, the Arab Spring — the tents’ presence raised further questions about the inability of civil society and non-governmental organisations to conduct actions — physical, symbolic or substantive — that could jolt negotiators out of their insincere inertia.

So civil society was congregating at the University of KwaZulu-Natal campus discussing Yogic farming, participating in climate justice teach-ins and hosting cultural events about both struggle and the environment.

But it was Groundhog Day all over Durban, including on the university campus. As at previous talkshops, the left was bickering: Were the Trotskyites using popular movements merely as protest marching fodder to push their own agendas? Were the voices of the poor really emerging through discussions, or, much like the negotiations at the International Convention Centre, floundering under the “tyranny” of business; are grassroots organisations suffering under the “tyranny” of academics and funders?

Some of the South American activists were itching for real direct action — as were some South Africans. Desperate times called for more militant measures was the thinking among some activists.

But Alberto Gomez, from the La Via Campesina global peasant movement, had a more long-term vision and said COP17 was useful “for developing fraternal links with other grassroots movements so that we can act both locally and globally against climate change”.

Every man and his cause was at COP17. Witness, during Saturday’s civil society protest march, the Hare Krishnas faced off against ANC supporters in green COP17 volunteer tracksuits, who were there to “defend the president [Jacob Zuma]” and throw water bottles at the Democratic Left Front. The ANC did not want any pencils because of their impact on deforestation, apparently.

Every man and his appetite was also in Durban. Local media reported delegates staying at the Oyster Box Hotel in Umhlanga gorging on Beluga caviar flown in from Paris and foie gras from Harrods in London. The delicacies got carbon credits by flying First Class, apparently.

Every other man, his dog, his blag, cause and interest was at COP17. Aside from Brangelina and a little fellow called sincerity.